Atop a craggy mountain that has withstood foreign invaders for decades, anti-Taliban fighters fire a mounted heavy machine gun into a deep valley.

They are members of the National Resistance Front (NRF) – the most prominent Afghan opposition group to emerge since the Taliban captured Kabul nine days ago.

With militia fighters and former government soldiers in its ranks, the NRF has set up machine gun nests, mortars and surveillance posts fortified with sandbags in anticipation of a Taliban assault on their bastion, the Panjshir Valley.

Its fighters, many in military camouflage fatigues, patrol the area in US-made Humvees and technicals – pickup trucks with machine guns mounted on the back.

Many carry assault rifles, rocket-propelled grenades and walkie-talkies. Some pose on their vehicles against a dramatic background of snow-covered peaks in the valley, which begins about an hour north of Kabul.

“We are going to rub their faces in the ground,” said one fighter at a position in the Panjshir heights, listing past victories against the Taliban.

His comrades then raise their fists and chanted “God is great”.

“If Taliban warlords launch an assault, they will of course face staunch resistance from us,” Ahmad Massoud, one of the NRF leaders, said in a Washington Post op-ed last week.

He is the son of the late Tajik commander Ahmad Shah Massoud, revered for turning the Panjshir Valley into an anti-Soviet and anti-Taliban bastion.

The defensive preparations are familiar for Panjshir residents who saw Massoud Senior thwart multiple Soviet assaults in the 1980s and Taliban attempts to take the area in the late 1990s.

An NRF spokesman told AFP on the weekend that it is ready to resist any Taliban aggression but wants to negotiate with the group about an inclusive government.

Reporting from Kabul, Al Jazeera’s Charles Stratford said that the valley has become a historical point of reference for Afghans that fought against Soviets in 1980s.

“It is now under the control of a group called the National Resistance Front. There are at least two members of the former government there including the defence minister and vice president,” said Stratford.

“These people are demanding that the Taliban prove that their government will be inclusive, open, accountable and include the variety of ethnic minorities.

“The Taliban have said that is happening. But worryingly, we understand that hundreds if not thousands of the Taliban forces have surrounded the Panjshir Valley. 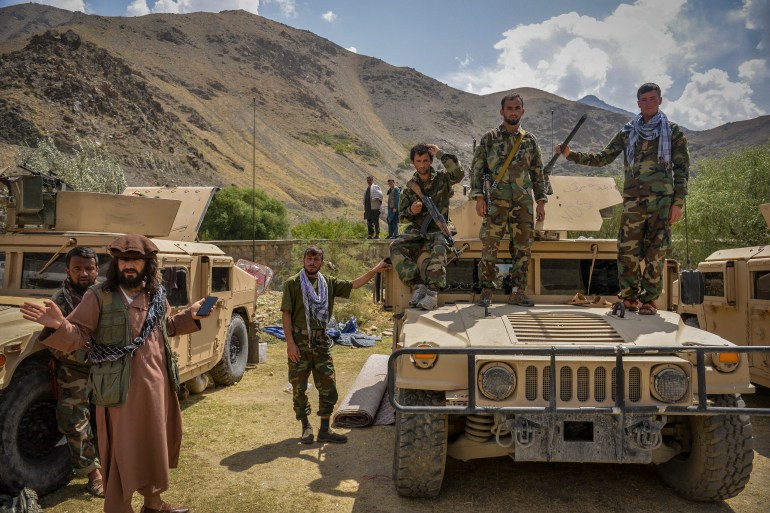 The Taliban have also said they want to handle the situation peacefully, but media reports on Tuesday said the Taliban dispatched hundreds of fighters to the Panjshir Valley.

Former Vice President Amrullah Saleh, who headed to the valley after the fall of Kabul, said a humanitarian disaster was brewing.

“Talibs aren’t allowing food & fuel to get into Andarab valley,” he tweeted, referring to an area under Taliban control that abuts Panjshir from the northwest.

“Thousands of women & children have fled to mountains.”

There have been scattered reports of clashes around Panjshir in recent days, with conflicting claims from both sides that have been impossible to independently verify.

The NRF has said it is ready for battle, but it remains unclear if the force has the supplies and equipment to withstand a long siege by the Taliban.

Ahmad Massoud said in his op-ed that they have arms and ammunition stores, as well as the weapons brought to Panjshir by former Afghan forces.

But he added that without help from the outside world, his fighters would not be able to withstand the Taliban’s siege for long.

“We know that our military forces and logistics will not be sufficient,” he wrote.

“They will be rapidly depleted unless our friends in the West can find a way to supply us without delay.”

Elders from the Panjshir Valley have reportedly been speaking with Taliban officials in the Afghan capital, but there has been no breakthrough yet.