US Capitol Police have arrested a suspect who allegedly threatened to detonate a bomb near Congress after an hours-long standoff on Thursday.

Capitol Police Chief J Thomas Manger identified the suspect as Floyd Roy Roseberry from North Carolina and said he was taken into custody without incident.

Manger said police communicated with the suspect using a whiteboard after he refused to use a telephone. Eventually, he surrendered.

“He got out of the vehicle and surrendered, and the tactical units that were close by took him into custody without incident,” the police chief said.

He did not confirm whether Roseberry actually had explosives, saying the investigation is still on.

“We do know that Mr Roseberry has had some losses of family … His mother recently passed away, and we spoke with members of his family, and there were other issues that he was dealing with,” Manger told reporters.

Earlier in the day, Manger said police were negotiating with the suspect who claimed to have a bomb in his truck near the library of Congress after evacuating the area surrounding the vehicle.

Roseberry remained in the vehicle, a block away from the US Capitol and the Supreme Court, for hours.

Manger said officers first approached the truck, which was parked on the sidewalk, at about 9:15am local time (13:15 GMT) on Thursday. The suspect told them that he had a bomb and was holding what appeared to be a detonator.

“My negotiators are hard at work trying to have a peaceful resolution to this incident,” Manger said at a news conference.

Several law enforcement agencies, including the FBI and the Bureau of Alcohol, Tobacco, Firearms and Explosives (ATF), were also involved in the investigation, the police chief said.

Manger declined to reveal the details of the negotiations or the possible motives of the suspect.

Congress and the Supreme Court are not in session, so few lawmakers are in Washington, DC, but Manger said many people were working in the area.

A video purporting to be streamed by the suspect from inside the vehicle showed him requesting to speak to President Joe Biden.

“I’m waiting on your phone call,” the apparent suspect, a white man, says in the video addressing Biden. He claimed to have two boxes full of ammonium nitrate, a highly explosive substance.

In an expletive-filled rant, the man said he is representing “the patriots” and “ready to die for the cause”.

The supposed suspect added that he is standing for Afghanistan, saying that Biden should have made sure that Afghans were “alright before he left – before we left”.

“You can shoot me and kill me right here, and blow up two and a half city blocks and let all the patriots out in the country know,” he said, stressing that it is not his aim to hurt anyone.

He said he asked the police to clear the area, so no one gets hurt. The Facebook page on which the video was broadcast appears to have been taken down.

Early in 2021, the same area witnessed chaos and violent riots as supporters of outgoing President Donald Trump stormed the Capitol.

A pipe bomb was also left near the headquarters of the Democratic and Republican parties the day before the riots. Authorities have yet to find the person who left the explosive device, which did not detonate.

Several Democrats in Congress warned about the threat of right-wing violence in response to the bomb threat incident on Thursday.

Brian Schatz, a Democratic US senator from Hawaii, called the suspect a “right wing domestic terrorist”.

“We must confront the violent cult that created this. This isn’t about tax rates or abortion or the EPA [US Environmental Protection Agency] – this is about whether we will tolerate violence as an extension of politics,” Schatz wrote in a Twitter post.

There’s a right wing domestic terrorist threatening to blow up the Capitol this very moment. We must confront the violent cult that created this. This isn’t about tax rates or abortion or the EPA – this is about whether we will tolerate violence as an extension of politics.

Congressman Eric Swalwell, a California Democrat, also referred to the suspect as a “terrorist”, linking his actions to the riots on January 6 and some Republicans’ refusal to push back against the notion that Biden’s victory against Trump was illegitimate.

“We were warned that Radical Republican lies would lead to violence,” Swalwell wrote. “Now, a terrorist is outside the Capitol spewing those lies and claiming to have explosives. Until Kevin McCarthy and GOP leaders denounce the Big Lie our country will remain under assault.” 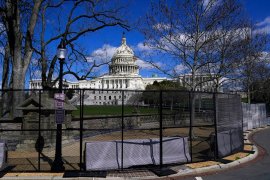 Six months after riot, fence around US Capitol comes down 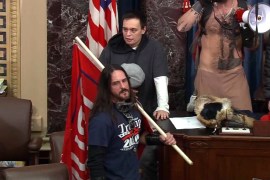 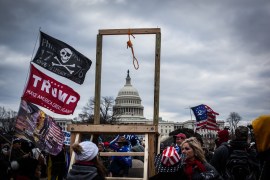