France’s highest appeal court has upheld a guilty verdict against the son of Equatorial Guinea’s president for embezzlement, paving the way for the potential return of tens of millions of dollars to the country’s people.

Wednesday’s ruling on Teodoro Nguema Obiang Mangue, who is also the vice president of the Gulf of Guinea nation, came after he was handed a three-year suspended sentence and a 30 million euros ($35m) fine at the end of his trial in absentia in 2020.

Luxury assets seized in France during the investigation were ordered to be confiscated.

Transparency International, which was party to the case, has estimated that the seized goods, which include a mansion in the heart of the French capital, are worth about 150 million euros ($177m).

Obiang has always denied any wrongdoing and argued that French courts had no right to rule on his assets, but the Cour de Cassation rejected his appeal.

The residence at the centre of the dispute is a luxury residence on Avenue Foch in Paris – a grand, sweeping road near the Arc de Triomphe. It has 101 rooms, a gym, a hairdressing studio and a disco with a cinema screen.

Now that there can be no more appeals in his case, the assets are set to be put on sale under a new French law, which stipulates that the money, instead of going to the French state’s coffers, should go back to Equatorial Guinea.

That could be done via local or international NGOs or France’s development aid fund.

Wednesday’s ruling came two days after Equatorial Guinea closed its embassy in London following a move by the United Kingdom’s government to impose sanctions against Obiang.

The UK accused him of siphoning off state assets into his own bank accounts to fund a luxurious lifestyle, including mansions around the world, luxury cars and the crystal-covered glove that Michael Jackson wore on his 1987-89 “Bad” tour.

Obiang’s father, President Teodoro Obiang Nguema Mbasogo, has ruled Equatorial Guinea since taking power in a coup in 1979, 11 years after the country gained independence from Spain.

The exploitation of the country’s oil reserves over the past few decades has greatly increased the size of its economy.

More than 76 percent of the population, however, continue to live in poverty, according to World Bank figures.

Other cases of alleged misappropriation of funds by foreign officials are lined up in France and could potentially also end up with decisions to return money to the affected populations.

A French court has found the exiled uncle of Syrian President Bashar al-Assad, Rifaat al-Assad, guilty of acquiring millions of euros worth of French property using funds diverted from the Syrian state.

An appeal is still pending in that case. He has denied any wrongdoing. 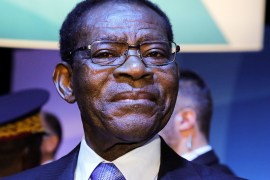 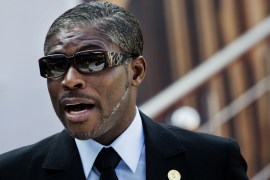 To get IMF bailout, Equatorial Guinea’s ruler must reveal assets