Toronto, Canada – Thousands of people from five remote First Nations in northern Ontario are being evacuated by plane amid some of the largest wildfires currently burning in North America.

An early and intense wildfire season fueled by climate change has forced evacuations across the continent – from Oregon to British Columbia to Ontario. More than 150 wildfires are blazing in northwestern Ontario near small First Nation communities that can only be accessed by plane or boat, and do not have the resources to fight back. Last week, Mexico sent 100 firefighters to Ontario to help battle the flames.

First Nations in the region have faced wildfire evacuations before, but not at this scale, explained Nishnawbe Aski Nation Grand Chief Alvin Fiddler, who represents 49 communities in northern Ontario. Nearly 3,000 people have evacuated from northern First Nations.

Deer Lake and Poplar Hill are fully evacuated, most of Pikangikum has evacuated, and Cat Lake and North Spirit Lake have begun evacuating vulnerable people. The evacuees are staying in hotels in Thunder Bay, Sault Ste Marie and Toronto.

First Nation communities are already experiencing stress as they recover from the pandemic and grieve the discoveries of children’s graves at residential schools, Fiddler explained.

“All this is compounding on the mental health of our families and children,” he said. “It’s a very challenging time for our families.”

Nearly 300 fires have forced evacuations of more than 5,000 properties across British Columbia, prompting the province to declare a state of emergency this week, however, Ontario has hesitated to do the same.

Fiddler said he was calling Ontario officials almost daily to urge them to declare a state of emergency, which would expedite resources for evacuations and firefighting.

“It’s frustrating dealing with government officials — they are always trying to minimise the threat and the danger that our communities face, including from climate change and the forest fires,” Fiddler said. “When it comes to Indigenous communities, their concerns are not taken as seriously.”

We are still waiting for #Ontario to issue the same same declaration as B.C.

The province said it is collaborating closely with First Nations, municipalities and the federal government “to ensure that all necessary resources are deployed”. EMO said an emergency declaration “is not required” for the province to provide disaster response.

Wildfires are burning across North America from northern Canada to the prairies to the western United States. Smoke from various fires has merged and is surfing the jet stream from west to east, bringing ominous, hazy skies to East Coast cities that are unaccustomed to air quality warnings.

In Oregon, the Bootleg Fire has destroyed 162,000 hectares (400,000 acres), making it the largest blaze currently burning in the US, and one of the largest in the state’s history. At least 2,000 people have left their homes in the state, under evacuation orders.

The Pacific Northwest is no stranger to wildfires, but the fire season is now 30-to-60 days longer than it was in the 1980s, according to John Bailey, a professor in the College of Forestry at Oregon State University and a former wildland firefighter.

“Climate is big picture weather, and we’ve been on a trajectory here the past couple decades of fire season getting longer, droughts getting more severe, fire season starting earlier,” Bailey said.

He said it is “universally accepted” that extreme wildfires and a longer fire season are indicators of climate change.

The western US has experienced severe drought this year, continuing a 20-year megadrought that tree rings indicate had not occurred for at least a thousand years.

While not every year will be an extreme fire year, he said the Pacific Northwest is on a trend towards intensifying wildfires that are taxing fire management systems. “That trajectory is pretty darn clear.”

“This year is novel so far in terms of how early it started,” Bailey said of Oregon. He said the scale of fire in the state in July is “unprecedented” in modern times. He predicted the Bootleg Fire would set a new record as Oregon’s largest wildfire.

“We need to recognise that these are not unusual events any more,” Bailey added. “This is something that is inevitable and we have to live with.”

“Whether it’s the smoke or their own evacuation, everyone is going to have a turn with this,” he said.

Despite what he called a “spooky” trend, Bailey emphasised that there are solutions — from cutting emissions to introducing more prescribed burns to improve the resistance of forests. “We can hold up the good examples and use that as motivation to get going,” he said.

‘I was hoping for the best’

Sayyid Bey left the fashion industry and bought a plot of land in the mountain town of Bly in southern Oregon with the goal of living in balance with nature and teaching his 11-year-old son to live a zero-waste, off-grid lifestyle. He lived on the property with his son, his parents, his wife and her two kids.

This year, there was less snow and rain than normal. Then came the searing drought that dried up the trees and pine needles. In mid-July, Bey heard about the fires. Normally, he said, firefighters put them out quickly, but this year was different.

He saw the flames speeding down the road, shooting high above the treetops about 200 feet in the air, he estimated. As his family packed their things, they saw the flames racing towards them. They moved most of their belongings across the road into their neighbour’s barn, which they hoped would be safe because it was far from the trees and surrounded by rocky ground.

“I was hoping for the best,” Bey said.

When they returned, they saw all their belongings — toys, suitcases of clothes, baby photos, letters from grandparents who had passed away — were reduced to ash. The trailers they lived in and the treehouses and bunkbeds he built for the three kids were destroyed.

“Ninety percent of what we had was gone,” he said. “Essentially, we only had the clothes on our backs.” He started a GoFundMe to recover from the loss.

Bey wants to rebuild in the same location. He plans to construct a pyramid-shaped house and cabins where people can visit and feel connected to nature.

“It’s time to decompress, get out of denial, plan for the future and rebuild better than before,” Bey said.

“No matter what happens, as long as you’re alive and breathing, you can start a new day.” 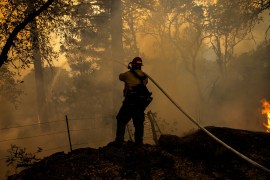 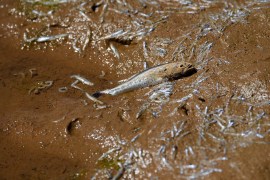 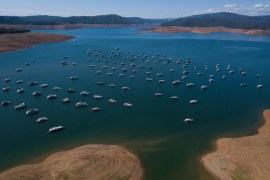 In Pictures: Across US West, drought arriving dangerously early

The second-largest reservoir in California is at less than half of its average capacity at this time of year.