Amid an unprecedented heatwave across the United States, President Joe Biden will meet Wednesday with governors from western states, cabinet members and federal emergency management officials to prepare for what experts warn is already one of the most intense drought and wildfire seasons yet.

The president has already committed to increasing firefighter pay from the current rate of $13 an hour, which he called “a ridiculously low salary”.

Experts are watching to see if Biden can adequately prepare the US for another year of dangerous wildfires and extreme temperatures, while also steering the forests and climate back into balance long term.

But they warn that, in the short term, the danger is already baked in.

“In terms of this year, there’s not a lot that we can do except to make sure firefighters have what they need, and that FEMA [Federal Emergency Management Agency] and the Forest Service and the BLM [Bureau of Land Management] are coordinating as closely with state governments as they can,” explained Michael Wara, director of the Climate and Energy Policy Program at Stanford University.

“No matter how hard governments try to get the risk under control, it’s going to take some years to get ahead of the problem,” said Chris Field, director of the Stanford Woods Institute for the Environment.

Why are wildfires getting worse?

Wildfires are already burning in Arizona, California and other states, and water reservoirs are at historic lows.

The western US is experiencing a decades-long megadrought that has not been seen for 1,000 years, scientists say. Climate change is accelerating drought by altering the water cycle and causing increased evaporation on top of the already low precipitation.

This means a longer, more intense wildfire season this year and in future years, experts explain, because decades of poor planning have left forests dense with plants that have now dried out and are ready to burn.

The sheer area of land burned by wildfires has increased dramatically since the 1970s, reports the Reuters news agency, and the US now regularly experiences “megafires” – those that burn more than 100,000 acres (40,000 hectares). In 2020, wildfires burned a record-breaking 10 million acres in the western US.

Humans are the most common cause of wildfires, and population growth in the west along with residential construction in fire-prone areas is sparking more dangerous fires. All of this has contributed to increasingly deadly wildfires and health problems like heart attacks and asthma from heavy smoke.

What should Biden do?

Experts are clear on this: US forests are too dense and we must proactively thin them using mechanical clearing and prescribed burns. To do that, the US Forest Service needs more money.

Last year, the Forest Service experienced a huge cut in its hazardous fuel reduction budget, Wara explained. Before the pandemic, it was spending more than $300m a year, but that was cut to less than $100m per year in 2021. Its funding was increased for 2022 but is still below pre-pandemic levels.

“We need to think differently about this problem, and the Forest Service in their 2022 budget is not thinking differently,” Wara said. “It’s more of the same.”

The Forest Service wants to do two to four times as much hazardous fuel reduction compared with current levels, Wara said, but it actually needs to do 10 times as much.

Federal and state governments can prevent enormous economic losses in the future by investing now, Field said. He used California as an example: in 2019, California suffered economic losses of more than $30bn from wildfires, but it could spend an estimated $5bn to $10bn a year over the next five years to get wildfires under control. However, California is still spending too little; its wildfire budget for 2022 is $1bn.

“The investment required to get on a safe and stable track would overall be less than the losses in a single bad wildfire year,” Field said.

Experts believe we need to return to the strategy that Native Americans used before they were forcibly removed from their land. The idea is to reintroduce “good fire”. Hundreds of years ago, less intense fires regularly creaked and crackled their way through the forests, and the Indigenous used planned burns to keep ecosystems in balance. When settlers took the land, the policies were inconsistent and harmful.

John Bailey, professor at Oregon State University’s College of Forestry, was a firefighter in the 1980s. Back then, firefighters believed they were doing the right thing by suppressing fires, but their efforts allowed forests to grow dangerously dense, and turned agricultural land into forest, paving a path for fires across larger areas of land.

In the 1990s, policies to protect endangered spotted owl habitat led to a sharp decrease in forest harvesting and management in the west, but Bailey said we actually need “good fire” to renew that habitat. “Fire is a destructive force and a creative force for maintaining old growth, and that’s the path we want to be on if we want to conserve them,” Bailey said.

Although there have been fewer fires in the US than in past decades, statistically, if a home fire is reported, occupants are more likely to die today than 40 years ago. Read the new NFPA & #FPRF 'Fire in the US' report for more: https://t.co/G7zgqLJDC3 #research #fire #homefire pic.twitter.com/8nvSzKg2aV

“There needs to be a fire, a good fire, a low-intensity surface fire, forest floor fire every decade or so, probably at the longest every 20 years,” Wara said. “And that means that every year we need to be treating something like 10 percent of the entire landscape. We’re nowhere close to that – we’re down around one percent. That used to be a thing that didn’t matter so much because climate change wasn’t supercharging the fire season, but now, of course, it is.”

Wara added that the Biden administration should fund more pre-disaster risk reduction of wildfires through FEMA.

Wara said Forest Service employees are underpaid and many are seasonal. “To get this work done, they actually need a brand new workforce.”

The way the current system works is that, in the off-season, people are employed to clear hazardous fuels, and in fire season they work as firefighters. Because the fire seasons are now longer and more intense, they begin firefighting work earlier, and when fire season is over, they need a break to heal mentally and physically, and they need to see their families. That means that not as much hazardous fuel clearing is happening.

Bailey suggested employing a federal workforce to manage forests, similar to the Civilian Conservation Corps, a public work relief program in the 1930s and 1940s.

Wara said there is “an enormous opportunity” to involve Native Americans in a new model and workforce, because many areas are in need of treatment border reservations. He said policymakers should consider giving land back to Native Americans to manage.

“If we’re going to be conserving more land, we need to be thinking about that in a different way that takes account of the racial injustice and genocide that occurred to result in the patterns of federal and private land ownership that we have now,” he said.

“The wildfire problem is something we can get under control, but we have to be proactive and ambitious,” Field said. 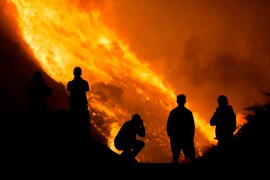 Utility company said it was investigating whether its electrical equipment caused the blaze. 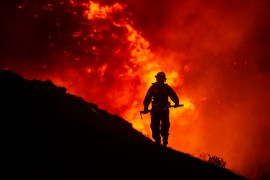 The fire forced the evacuation of some 25,000 people and is still burning, as two firefighters were hospitalised.