UEFA has asked its main sponsors, including carmaker Volkswagen, not to display advertising banners in the rainbow colours of the LGBTQ community in Baku and St Petersburg for Euro 2020 matches, citing compliance with local laws.

“Due to UEFA’s concerns about the legal framework for venues in Russia and Azerbaijan, the association informed us it wouldn’t be possible to use rainbow-coloured advertising on billboards in Saint Petersburg and Baku,” German car giant Volkswagen wrote in a statement.

When contacted by the AFP news agency, a spokesman said while UEFA “fully supports” messages of “tolerance and respect”, it asks sponsors “to ensure that their design complies with local legislation and this was not the case in Baku and Saint Petersburg”.

“UEFA’s audacity and deceit are boundless. With this action, it is betraying not only lesbians, gays, bisexuals, trans and intersex people in Azerbaijan and Russia, but also in the whole of Europe,” said spokesman Alfonso Pantisano.

“Once again, during this European Championship, it becomes clear that UEFA’s protestations of standing for a diverse, inclusive and discrimination-free society are as worthless as they are hypocritical.”

Earlier in the tournament, during Germany’s group-stage match against Hungary, the city of Munich wanted to light the Allianz Arena in rainbow colours in support of the LGBTQ community.

Several Euro sponsors, including Volkswagen, instead broadcast rainbow-coloured adverts in stadiums during the last-16 matches, although none of those games was played in Russia or Azerbaijan.

Volkswagen said it “regretted” UEFA’s latest refusal, adding it wanted to “send a clear signal in favour of diversity”.

The company said it would be allowed to show rainbow-coloured advertising in Rome and London during the rest of the European Championship.

Two Euro 2020 football matches in Hungary are being investigated by UEFA for “potential discriminatory incidents”.

During Hungary’s opening Euro 2020 match against Portugal in Budapest last month, images on social media showed banners with “Anti-LMBTQ” on them – the Hungarian abbreviation for lesbian, gay, bisexual, transgender and queer (LGBTQ).

Hungary’s parliament passed legislation in June that bans the dissemination of content in schools deemed to promote homosexuality and gender change, amid strong criticism from human rights groups and opposition parties.

Hardline nationalist Prime Minister Viktor Orban, who faces an election next year, has grown increasingly conservative on social policy, railing against immigrants and LGBTQ people during his self-styled illiberal rule, which has deeply divided Hungarians. 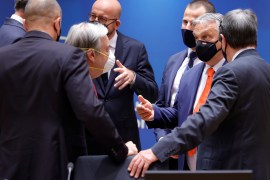 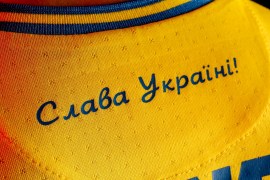 Governing body says ‘Glory to our Heroes’ is ‘clearly political in nature’ after a complaint from Russia. 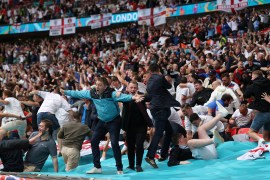 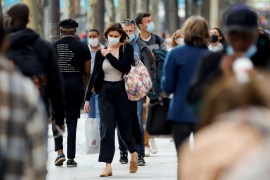