Another night of violence left at least 90 Palestinians wounded after Israeli police cracked down on protesters outside occupied East Jerusalem’s Old City, as concerns mounted on Sunday that the situation may spiral out of control.

An estimated 90,000 Muslim worshippers prayed at the nearby Al-Aqsa Mosque on Islam’s holy night of Laylat al-Qadr – or the “Night of Destiny”, the most sacred of prayers during the Muslim fasting month of Ramadan – on Saturday.

Some stayed on to protest Israeli plans to forcibly expel Palestinian families from their homes on land claimed by illegal Jewish settlers in the Sheikh Jarrah neighbourhood of East Jerusalem.

Israeli officers on horseback and in riot gear fired stun grenades and water cannon against Palestinians who in turn threw stones, lit fires, and tore down police barricades in the streets leading to the walled Old City’s gates.

Israeli security forces were on high alert on Sunday, bracing for a further escalation ahead of what Israelis call Jerusalem Day. Many Israelis mark the day East Jerusalem was occupied in 1967 – and later annexed by Israel – with marches throughout Jerusalem each year.

About 30,000 Jewish settlers are expected to participate in a march towards Damascus Gate in the Old City on Monday.

The gate will be closed to Palestinians until 7:30pm for “security reasons”, Israeli police said, adding 3,000 forces would be deployed.

Israeli police on Sunday gave the go-ahead to the annual Jerusalem Day parade, a flag-waving display of Israeli claims to all of the city. Police spokesman Eli Levi said there were no plans to call off the march, despite the potential for confrontations.

Amos Gilad, a former senior military official, told Army Radio the parade should be cancelled or rerouted away from the Old City’s Damascus Gate, saying “the powder keg is burning and can explode at any time”.

Monday’s parade is typically attended by hardline nationalist Israelis and is widely perceived as provocative. 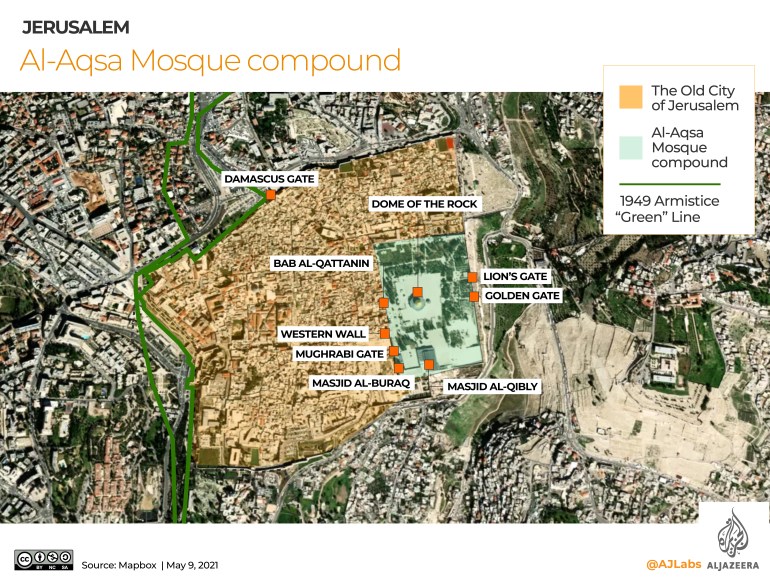 It will coincide with an expected decision by Israel’s Supreme Court on the fate of dozens of Palestinians who are fighting attempts by Israeli settlers to evict them from their homes in Sheikh Jarrah.

The neighbourhood has been the scene of regular confrontations, particularly during Ramadan, between Palestinian residents and their supporters on one side, and Israeli police and Jewish settlers on the other.

‘Full support for our heroes’

An Arab Israeli NGO called on senior Israeli officials to order security forces to halt their “violent incursions” into the Al-Aqsa Mosque and refrain from using excessive force against Palestinian worshippers and medical personnel.

“Israel is acting responsibly to ensure respect for law and order in Jerusalem while allowing freedom of worship,” Netanyahu said in a meeting of security officials.

Earlier on Saturday, footage of Israeli police violently dispersing a sit-in by Palestinian protesters in Sheikh Jarrah showed a group of policemen destroying tents and pushing people away from the site, while another clip showed an officer violently dragging a Palestinian woman along the road.

Israeli police also blocked buses of Palestinians with Israeli citizenship from reaching Al-Aqsa from the main highway leading to Jerusalem.

Palestinians have staged a series of sit-ins in the area in recent days denouncing Israeli orders for them to be removed from their homes. Israeli security forces have attacked the demonstrators using skunk water, tear gas, rubber-coated rounds and shock grenades.

Dozens of Palestinians have been arrested. Entrances to the Sheikh Jarrah neighbourhood have also been blocked to keep protesters out.

“We strongly condemn Israel’s heinous attacks … that are unfortunately being carried out every Ramadan,” Turkey’s president said.

Speaking at an event in Istanbul, Erdogan called on all Muslim countries and the international community to take “effective” steps against Israel, adding those that remain silent were “a party to the cruelty there”. 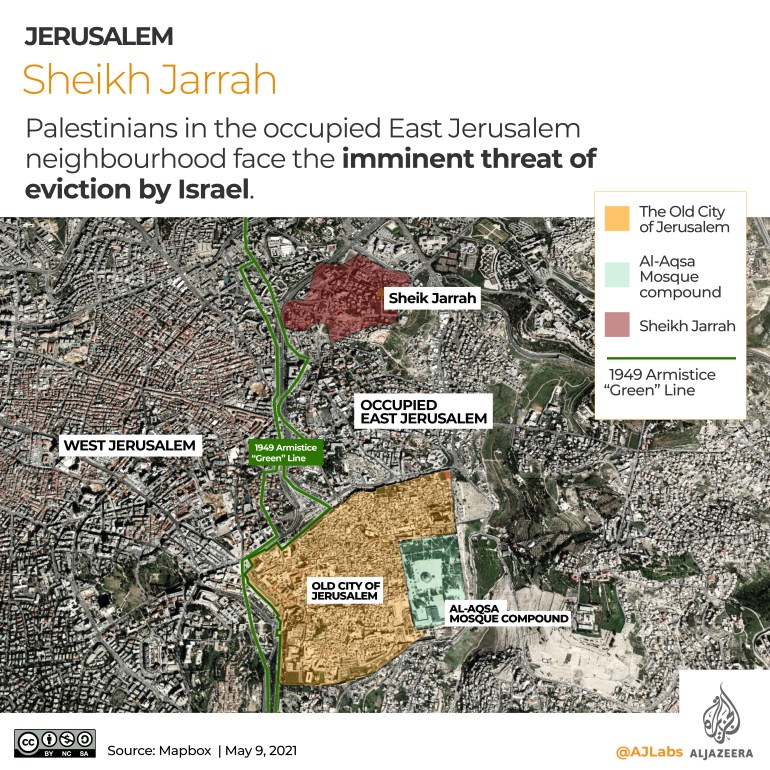 The developments in East Jerusalem prompted international calls for an end to the violence.

In a joint statement on Saturday, the Middle East Quartet – the United States, Russia, European Union, and United Nations – expressed “deep concern” over the events.

“The envoys noted with serious concern the possible evictions of Palestinian families from homes they have lived in for generations… and voice opposition to unilateral actions, which will only escalate the already tense environment,” it said.

“We call upon Israeli authorities to exercise restraint and to avoid measures that would further escalate the situation during this period of Muslim holy days.”

The US – an ally of Israel whose tone has toughened under US President Joe Biden – said it was “extremely concerned” and urged both sides to “avoid steps that exacerbate tensions or take us farther away from peace”.

“This includes evictions in East Jerusalem, settlement activity, home demolitions, and acts of terrorism,” the US Department of State said.

A meeting of the Arab League is scheduled for Monday, but it is unlikely to change anything on the ground, Al Jazeera’s senior political analyst Marwan Bishara said.

This is unless Arab states, notably those that have normalised relations with Israel, decide to take meaningful action, he said.

“Unless the Arab League does take some serious initiative, including putting some of those states that normalise relations with Israel on notice … I think we will see simply more statements,” said Bishara.