The 23-year-old, who was born with an undiagnosed mental illness, and his mother fled their hometown of Dansha in Ethiopia’s war-hit Tigray region in mid-March.

“We have been expecting to receive food aid after we got here,” Kiflom’s mother, Mulu Yirdaw, told Al Jazeera from Shire, a town further east. “But it has been almost two months now. We received nothing.”

Throughout this time, Mulu and her son have found shelter in a small room at the home of a Shire resident and relied on locals giving them kolo, an Ethiopian cereal. But these food donations are irregular and inadequate, as the locals are also struggling, and the pair have previously gone an entire week without eating anything – and on one occasion for more than that.

“The community tries to help us. But there are many displaced and starved people, they cannot feed us all,” said Mulu, 64.

The weeks of starvation have made Kiflom and his mother lose significant weight. Worryingly, Kiflom has reached the point where he can no longer hold any food, his mother said.

“He is very ill. He has a high fever and fatigue. My son was never like this,” said Mulu, who has also begun feeling sick whenever she eats but has been unable to get any medical help for her and Kiflom.

Now in its seventh month, the conflict in Tigray is estimated to have killed thousands of people and displaced 1.7 million, creating an immense humanitarian crisis in an already poor region.

Abiy, whose forces are backed by troops from Eritrea and fighters from Ethiopia’s Amhara region, declared victory in late November when the army entered the regional capital, Mekelle. Fighting, however, is still ongoing and reports of massacres, rape and widespread hunger keep emerging.

Over the past six months, the United Nations, aid agencies and world powers have repeatedly called for full humanitarian access to the region of six million people in the face of growing fears of a protracted conflict with devastating effects on the civilian population.

On Monday, World Health Organization chief Tedros Adhanom Ghebreyesus, who is from Tigray, described the situation in the region as “very horrific“, with “many people” dying “because of hunger”.

In December, the Ethiopian government had promised “unfettered humanitarian access” but large parts of Tigray, particularly rural areas, are still largely cut off due to active hostilities, according to an update (PDF) earlier this month by The United Nations Office for Coordination of Humanitarian Affairs (OCHA). Parts of central, south and southeastern Tigray have been blocked by parties to the conflict since early March.

According to OCHA’s report, the scale of food insecurity is “large and dire”.

Out of about five million people in need of aid, the three food operators – Ethiopia’s National Disaster Risk Management Commission (NDRMC), the USAID-funded Joint Emergency Operation Program for Food Assistance in Ethiopia (JEOP) and the World Food Programme (WFP) – at the end of April had distributed more than 19,000 metric tonnes (MT) of food to 1.1 million people.

NDRMC has allocated 10,839 MT of food and distributed 427 MT of food to 27,466 people, said OCHA, which stressed that restoring agricultural activities to their pre-conflict status in some of the accessible areas and supporting farmers with seed supplies are among the immediate needs to resume farming and increase availability of food products.

A survey published last month by SCORE on humanitarian access in Tigray found that 94 percent of the 614 respondents have been in need of aid since the start of the conflict, with food being the most urgent need. However, 57 percent said they had not received any aid in the past three months.

“There is considerable risk of widespread malnutrition with pockets of hunger in the coming months,” she warned. “Over the past weeks, of the 309 children who came to our clinics, there was a global malnutrition rate of 26.6 percent. More than 6 percent were acutely malnourished.”

After months of denial, Abiy acknowledged on March 23 the presence of Eritrean troops in Tigray. Both Ethiopia and Eritrea have pledged that Eritrean troops would be pulled out of the region but testimonies of people who have recently been internally displaced (IDPs) suggest otherwise.

“The Eritrean soldiers burned all of my crops and food reserves. They took my sheep,” said Tekay Gebru, a recent arrival in Mai Woyni, a secondary school in Mekelle that has been repurposed to host IDPs.

“They burned my neighbour, an old blind woman together with her crops and house,” the 40-year-old mother of two told Al Jazeera. “They put another neighbour into the fire when he begged them to leave for him a small portion of crops.”

Witnessing these events on April 12, Tekay said she left her village of Adi Awso in southeastern Tigray the same day. She stayed in other villages near the town of Samre until April 22, when newly arrived Eritrean troops came to replace those who had been stationed in the area for months.

“The villages are now entirely controlled by these new coming Eritrean troops. Almost everyone fled, except the ones who are too old and weak,” said Tekay, who survived through the support of people she found in the other villages before arriving in Mekelle on foot.

“The villagers I met before I fled to Mekelle share what they have with each other. But there is very little to eat and share,” she added. “When I get food, I give it to my daughters. I ate nothing for the past four days. I am hungry.” 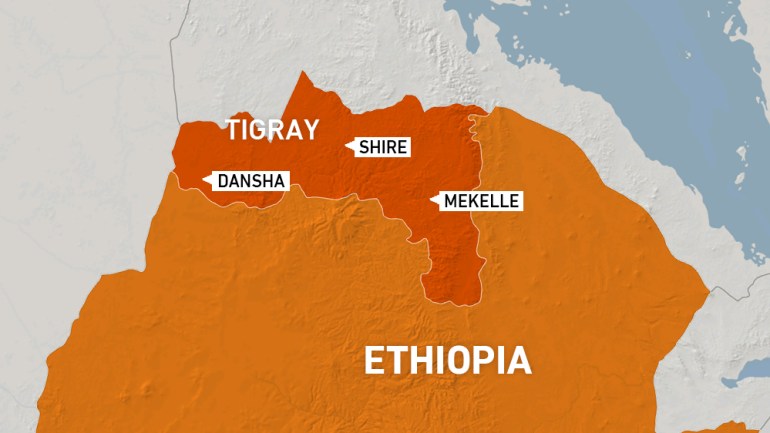 Yohannse Araya is also among the 176,230 IDPs who have taken shelter in 19 schools in Mekelle. The 60-year-old, who fled Ferese Maryam, a rural village in Adwa, lost his wife on the journey to the regional capital.

“On February 6, Eritrean troops looted our crops. Nothing was left for us to eat. We fled not to die from hunger. I made it to Mekelle. But my wife could not survive. The starvation killed her,” said Yohannse, who survived 15 days without eating anything.

After reaching Mekelle on February 28, Yohannse said he has not received any ration from the food operators. Instead, he and the other displaced people sheltering in schools rely on foods donated from the community and some local NGOs.

“There is no response. Only in December, 8,000 displaced people in Mekelle received a food ration of 30 kilos. But the number [of people displaced] is growing each day,” an aid coordinator of the Tigray interim government told Al Jazeera.

The coordinator, who requested to stay anonymous citing fear of reprisals, also said local authorities had received reports of eight deaths due to starvation since the start of the conflict.

“But I believe there are a lot more unreported deaths,” the official added.

In a report (PDF) published last month, the World Peace Foundation, a research organisation based at Tufts University, warned of the looming threat of mass starvation and famine in Tigray and accused Ethiopian and Eritrean troops of “systematically” dismantling the region’s economy and food system.

Eritrea’s Information Minister Yemane Ghebremeskel and Abiy’s spokeswoman Billene Seyoum were reached for comment about the allegations. Both did not respond.

In a statement last month, Ethiopia’s embassy in London said it “rejects, in the strongest terms, the unsubstantiated accusations by the World Peace Foundation that the Government of Ethiopia is ‘starving the people of Tigray’ and using ‘starvation as a weapon of war’”.

“The Government has, thus far, taken concrete steps to comprehensively respond to the humanitarian needs on the ground by delivering life-saving food supplies to over 4.2 million citizens in Tigray, in coordination with local and international partners,” the embassy said.

Eritrea has also rejected allegations of “the use of sexual violence and hunger as a weapon”, as well as of aid obstruction in a region where it says some 1.6 million people have depended since 2009 on humanitarian assistance. In a letter last month to the Security Council, Sophia Tesfamariam, Eritrea’s ambassador to the UN, also said: “The allegations of rape and other crimes lodged against Eritrean soldiers are not just outrageous, but also a vicious attack on the culture and history of our people.”

But in an interview given to state-owned Tigray TV on May 11, Abebe Gebrehiwot, deputy head of the Tigray interim government, said there is a “campaign” to prohibit Tigrayan farmers from ploughing their lands. Trucks that carry seeds are also being banned from entering Tigray, he said.

“This is nothing, but a deliberate act of exterminating the people of Tigray using starvation. If the corridors to transport seeds to Tigray are blocked and if farmers would be barred from farming their lands, what else can it be other than a desire to exterminate the people through starvation worse than the conflict?” said Abebe.

His interview came days after another top official in the Tigray interim government’s Disaster Management Bureau told Al Jazeera there is “a deliberate act of starving” the people of Tigray. Blaming the joint forces of Ethiopia and Eritrea for the alleged acts, the official said there had been a blockade of aid to central, northwest and parts of eastern Tigray since April 10.

“The Eritreans are telling us they will burn the food trucks if we pass. The Ethiopian troops are also blocking aid. This is a deliberate act of starving the people,” said the official who requested to remain anonymous citing fear of reprisals.

Back in Shire, meanwhile, the situation for Kiflom is deteriorating by the minute, according to his mother.

“I am scared my son will die soon,” said Mulu.