Warning: The story below contains descriptions of extreme sexual violence

Akberet* knew she was no longer safe.

The Amhara fighters in charge of her hometown of Humera and other disputed areas of western Tigray had just ordered all Tigrayans in her neighbourhood to leave their homes within 24 hours.

“The militiamen who have been terrorising us for months,” said the 34-year-old mother of three, “told us we are not allowed to live there anymore, because we are Tigrayans. They ordered us to leave empty-handed. They said all the properties we owned belong to Amharas, not to us.”

The Amhara forces entered western Tigray from neighbouring Amhara region in support of Ethiopian federal forces in November last year, when Prime Minister Abiy Ahmed ordered an offensive against Tigray’s then-ruling party, the Tigray People’s Liberation Front (TPLF). Since then, the Amhara, who are Ethiopia’s second-largest ethnic group, have taken control of several areas in the region – land, they claim, that historically has been theirs.

Akberet wasted no time after the ultimatum.

The following morning, on March 8, she fled her home on foot, her six-month-old baby strapped to her back, and her two other sons – aged four and seven – and 14-year-old brother in tow.

Some seven hours later, as they reached a bridge on Tekeze River used by the Amhara forces as an informal border between what they say is now Amhara and Tigray, four Amhara militiamen stopped them. The Amhara men separated Akberet from her children and brother and took her into an abandoned farmer’s house, just a few metres away.

The four men took turns raping her. After they were done, the militiamen inserted into her genitals a hot metal rod that burned her uterus.

“I begged them to stop,” Akberet told Al Jazeera. “I asked them, crying, why they were doing that to me. What wrong have I done to you?

“You did nothing bad to us,” she said they told her. “Our problem is with your womb. Your womb gives birth to Woyane [derogative term used to refer to the TPLF]. A Tigrayan womb should never give birth.”

After the militiamen left, Akberet was left there unconscious. Her brother went to get her, and with the help of other displaced people took her to a town to the east. “The sexual assault made her infertile,” a doctor who treated her there confirmed to Al Jazeera. Her bleeding has now stopped but Akberet, currently recuperating at a relative’s house, cannot walk and has to keep her legs spread. Sleeping at night is hard.

Hundreds of women have reported horrific accounts of rape and gang rape since the start of the conflict in Tigray nearly six months ago. Medics have reported removing nails, rocks and pieces of plastic from inside the bodies of rape victims, while the United Nations said last week women and girls in the mountainous region’s remote areas are being subjected to sexual violence “with a level of cruelty beyond comprehension”.

Healthcare workers in Tigray’s few operational clinics document new cases on a daily basis, despite fearing reprisals and attacks, according to Pramila Patten, the top UN official on sexual violence in conflict. The cases reported have involved Ethiopian soldiers and allied Eritrean troops, as well as Amhara fighters and other members of irregular armed groups or aligned militia.

In the regional capital, Mekelle, doctors at the Ayder Referral Hospital said the number of rape cases on April 1 stood at 272. Within one week, it had jumped to 330.

Doctors fear, however, the true number is much higher, suspecting there are many unreported cases as fighting continues and large parts of Tigray remain inaccessible.

Since December, three other women from the contested areas of western Tigray have reported suffering the same fate as Akberet, doctors said. In northern Tigray, troops from neighbouring Eritrea have also been accused of committing similar acts of gang rape and torture.

“On February 22, our hospital received an emergency call that a 21-year-old girl was gang-raped and found dumped in Edaga Hamus,” said Hayelom, who is currently out of Ethiopia but is in regular contact with his staff. “The report was that Eritrean soldiers had burned her external and internal genital parts using a match and hot metal rod. We could not send an ambulance immediately because of security issues. Later, the communication was lost. Perhaps the girl has died,” he added. 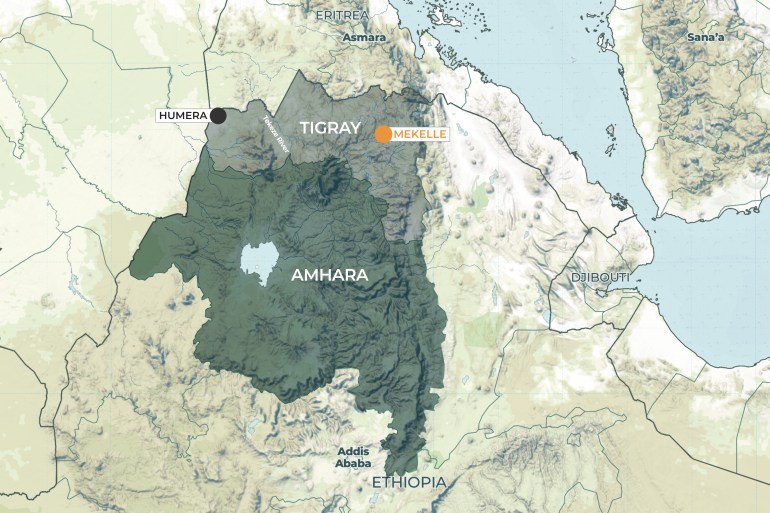 Abiy ordered federal forces into Tigray on November 4 after accusing leaders of the TPLF of launching an attack to take over the Northern Command of Ethiopia’s military. A senior official of the TPLF, which used to dominate Ethiopia’s politics until Abiy came to power in 2018, accused the federal government and its longtime foe Eritrea of launching a “coordinated attack” against it.

As fighting began, Tigray, a region of some six million people, was put under a nearly total communications blackout. Journalists were also barred from visiting the region, making it difficult to verify information. But that has now started to change, with investigations by human rights groups and numerous credible reports documenting alleged atrocities in Tigray.

After months of denials, Abiy acknowledged last month that Eritrean troops had entered the embattled region. In a lengthy parliamentary address, he also admitted for the first time that atrocities including rape had been committed, and promised perpetrators would be held accountable. He said, however, there had been a campaign of “propaganda” and “exaggeration”, before adding: “Women [in Tigray] were raped by men, but our soldiers [in the Northern Command] were violated with bayonets. No one raises this issue.”

The Ethiopian government has set up a task force to investigate the reports of sexual violence in Tigray, insisting it takes the allegations seriously. Separately, Ethiopia’s state-appointed human rights commission and the Office of the United Nations High Commissioner for Human Rights announced in late March they had agreed to carry out a joint investigation “into human rights violations and abuses allegedly committed by all parties” in Tigray.

Thousands of people are believed to have been killed in the conflict, while some 4.5 million are in need of humanitarian assistance.

According to Tigray’s federal government-appointed interim administration, there are 1.7 million internally displaced people in the region, an estimated 60 percent of whom are from the disputed areas of western Tigray.

But Etenesh Nigusse, spokeswoman of the interim government, told Al Jazeera that displacement is ongoing. “On a daily basis, we are receiving new cases of forceful displacements from the contested areas of western Tigray,” she said.

In late March, the head of the interim government told Reuters news agency that western Tigray “is occupied by the Amhara militias and special forces, and they are forcing the people to leave their homes”. Mulu Nega also accused Amhara of taking advantage of the precarious situation in Tigray to annex the contested territories, saying “those who are committing this crime should be held accountable.”

Sixty-five-year-old Medhin*, a restaurant owner in Humera, was among those forced to flee. She said five Amhara militiamen broke into her house at night on February 27 and threatened to kill her if she did not leave the area.

But the men did not stop there, according to Medhin. They raped her two daughters, aged 24 and 28, in front of her.

“They beat my daughters after the gang rape. They beat them in their genitals,” she told Al Jazeera. “They ordered me to leave the place. They took everything I owned. They threatened me to write for them a money check.”

The account of rape could not be independently verified but other displaced people sheltering at the same place confirmed to Al Jazeera that Medhin’s daughters had difficulties walking.

Last month, United States Secretary of State Antony Blinken asserted that “ethnic cleansing” has taken place in western Tigray, and called for the withdrawal of Eritrean and Amhara forces from the region. According to a UN Commission of Experts, ethnic cleansing refers to a purposeful policy designed to forcefully remove a civilian population from certain geographic areas by violent and terror-inspiring means, including murder, torture, arrests, rape and sexual assaults.

Al Jazeera spoke to 11 people from western Tigray who described different methods used by Amhara militias and Fano – an Amhara armed youth group – in the western Tigray areas they control.

At times, they have involved the Amhara militiamen giving Tigrayans a 24-hour notice to leave. In other instances, Tigrayans were ordered to accept a new identity card marking them as Amhara instead of Tigrayans, or leave. Some also reported being arrested and arbitrarily detained.

“On February 16, they came [to our house] and told us we should leave the place; that Humera is under the Amhara region and that they don’t need Tigrayans,” said Negisti*, a 40-year-old displaced woman who used to live with her mother in Humera.

“They arrested my mother. She is a 67-year-old who already suffers from kidney disease. Before they began arresting, they were issuing Amhara IDs to some Tigrayans. But later they said they stopped issuing IDs,” said Negisti, who left Humera after her mother was released from her week-long detention.

Tsgay*, an Ethiopian Orthodox Christian priest, was arrested twice before he decided to flee Humera on March 24 after learning about the extrajudicial killing of four people he knew, including a neighbour whose slaughtered body he said he had seen.

“They looted everything these dead men owned,” the father of three told Al Jazeera. “I started to fear for my life. At night, they always come and fire guns. They don’t have a ruler. They kill, rape, loot and do whatever they like. I preferred to flee than live in terror.”

Al Jazeera reached out to Amhara regional state President Agegnehu Teshager and his predecessor Temesgen Tiruneh, now director-general of Ethiopia’s National Intelligence Security Service, for comment about the allegations against the Amhara militia in western Tigray. Neither responded.

Eritrea has denied the allegations of rape and other crimes levelled against its soldiers as “outrageous” and “a vicious attack on the culture and history of our people”.

*Names changed and current whereabouts not disclosed to protect their identity