Israel claimed the building housed not only news bureaus but an office of Hamas, which controls the Gaza Strip. The Israeli military gave the building’s owner an hour to evacuate before attacking and bringing it down on live television.

“By intentionally destroying media outlets, the Israel Defence Forces are not only inflicting unacceptable material damage on news operations, they are also more broadly obstructing media coverage of a conflict that directly affects the civilian population.”

Deloire added: “We call on the International Criminal Court’s prosecutor to determine whether these air strikes constitute war crimes.”

US Secretary of State Antony Blinken said on Monday he has not yet seen any evidence supporting Israel’s claim that Hamas operated in the building. Blinken said he pressed Israel for justification for the brazen attack.

Saleh Hijazi, deputy regional director for the Middle East and North Africa at Amnesty International, told Al Jazeera Israel was trying to hide what it was doing in Gaza and to the people of Gaza, adding that Amnesty has been prevented from entering the enclave since 2012.

“We now have an International Criminal Court investigation open on the situation in the Palestinian territories since 2014. We call on the ICC to look into this incident,” he said, referring to the bombing of international media offices by Israeli forces.

“Even if there is a legitimate military target there, it is disproportionate to attack a building in such a manner,” Hijazi added.

“Such a disproportionate attack amounts to war crime. In addition, this follows a pattern of collective punishment against the Palestinian people in Gaza.”

Meanwhile, The Associated Press’ top editor called for an independent investigation into the Israeli air strike, saying the public deserves to know the facts.

Sally Buzbee, AP’s executive editor, said on Sunday the Israeli government has yet to provide clear evidence supporting its attack, which completely levelled the al-Jalaa Tower.

“We are in a conflict situation,” Buzbee said. “We do not take sides in that conflict. We heard Israelis say they have evidence, we don’t know what that evidence is. We think it’s appropriate at this point for there to be an independent look at what happened yesterday – an independent investigation.”

“Regardless of Israel’s spin, and the fact that Israel’s attacks on journalists are routine and systematic, this latest Israeli attack in Gaza, like many others, amounts to collective punishment, a war crime under international law,” it said in a statement. 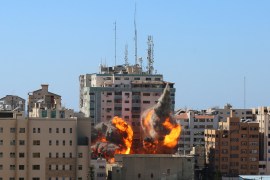 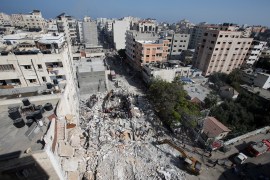 Military says it struck the homes of Yehiyeh Sinwar, the most senior Hamas leader in Gaza, and his brother. 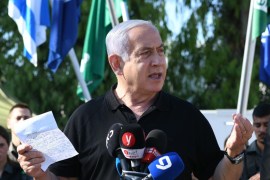