India has reported a record rise in coronavirus infections, becoming only the second country after the United States to register more than 100,000 new cases in a day, as hospitals in its worst affected state are overrun by patients.

The country’s daily COVID-19 cases soared by 103,558 on Monday, the biggest such daily increase, data from the health ministry showed, taking the total to 12.6 million, the highest after the US and Brazil.

India has recorded the most number of infections in the past week anywhere in the world. 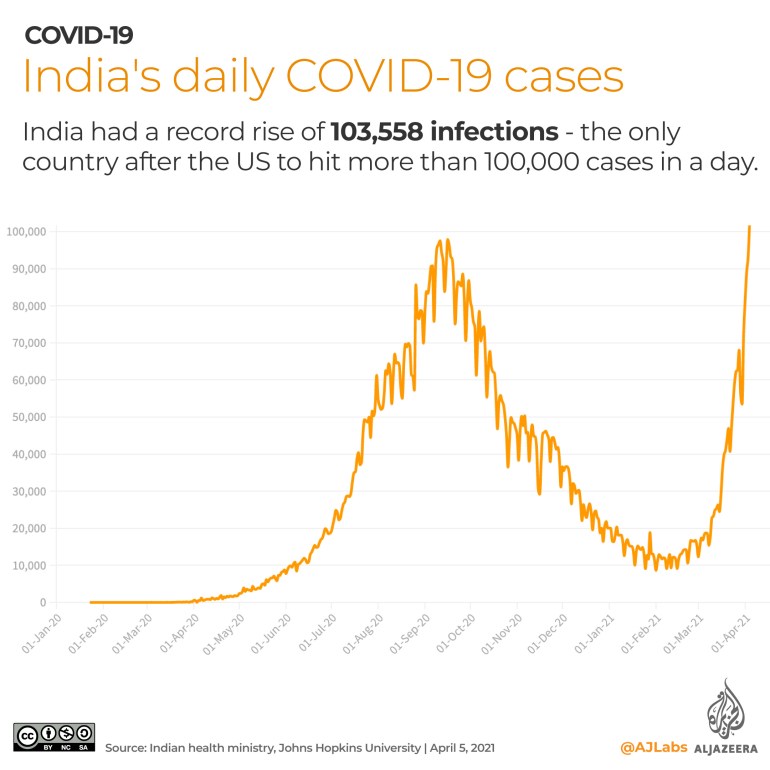 The country’s daily infections have leapt about 12-fold since hitting a multi-month low in early February when authorities eased most restrictions and people largely stopped wearing masks and practising social distancing.

India reported more than 90,000 cases every day in September last year – hitting a high of 97,894 cases on September 16 – after which infections came down sharply, only to rise again starting late February as the economy reopened fully and new virus mutants spread.

The western state of Maharashtra, home to India’s financial capital, Mumbai, reported a record 57,074 new cases overnight. The state has contributed more than 55 percent of total cases in the country in the last two weeks.

The Maharashtra government on Sunday announced new restrictions, including a night curfew and a weekend lockdown, to prevent the further spread of the virus.

Authorities will also impose a complete lockdown at weekends, as experts worried about a shortage of critical-care beds in hospitals, especially in its smaller cities.

More infectious variants of the virus may have played a role in the second surge, some epidemiologists say, but officials have cautioned against linking that to the surge.

Experts say the surge is blamed in part on growing disregard for social distancing and mask-wearing in public spaces, including public gatherings.

However, some say the Indian government has been sending mixed messages.

As health officials continue to warn of gatherings in public places, Prime Minister Narendra Modi and his party leaders continue to hold mammoth rallies in several states where local elections are underway.

The government has also allowed a huge month-long Hindu festival to go ahead on the banks of the Ganges River in northern Uttarakhand state. The festival draws tens of thousands of devotees daily.

India has intensified its vaccination drive in recent weeks, now administering over three million jabs a day. But the shots have been slow to reach India’s nearly 1.4 billion people.

More than 76 million Indians have received at least one shot, but only 9.5 million of them have received both. Health officials want to cover 300 million people by August, but experts say the vaccinations need to move faster to stop the spread.

The country has launched the third phase of its coronavirus vaccination drive with those older than 45 eligible for the jab. In the first two phases, front-line workers and people above the age of 60 were eligible.