United States President Joe Biden on Wednesday framed his planned withdrawal of US troops from Afghanistan around the reason they were sent there in the first place: The September 11, 2001 attacks on the US.

“It is time to end America’s longest war,” Biden said during a speech in the White House Treaty Room.

“We went to Afghanistan because of a horrific attack that happened 20 years ago. That cannot explain why we should remain there in 2021.”

“I am now the fourth American president to preside over an American troop presence in Afghanistan. Two Republicans. Two Democrats. I will not pass this responsibility to a fifth,” he said.

The US cannot “continue the cycle of extending or expanding our military presence in Afghanistan hoping to create the ideal conditions for our withdrawal, expecting a different result”.

Biden set September 11 as the date when the remaining 2,500 or so US troops will be withdrawn from Afghanistan, effectively ending what many have called America’s “forever war”, that cost more than 2,400 US lives and as much as $1 trillion.

More than 38,500 Afghan civilians have died and at least 72,300 injured since 2009 – the first year the United Nations began counting Afghan civilian casualties. While numbers of Afghan military deaths have been classified or shielded, Afghan President Ashraf Ghani has said at least 48,000 Afghan security personnel were killed between 2014 and 2020.

The US troop withdrawal process will begin on May 1, Biden said.

NATO troops will also be leaving Afghanistan beginning on May 1, NATO Secretary-General Jens Stoltenberg said Wednesday. There are around 7,000 non-US NATO forces there that rely on American support and leadership.

“Our drawdown will be orderly, coordinated, and deliberate,” Stoltenberg said at a press briefing in Brussels, alongside US Secretary of State Antony Blinken and Secretary of Defense Lloyd Austin.

“I think all allies are aware that this is not an easy decision, and this is a decision that entails risks, and also a decision that really requires that we continue to stay focused on Afghanistan, partly to make sure that the withdrawal takes place in a safe and secure and orderly way, that we’re sending a very clear message to Taliban if – that if they start to attack us, we will retaliate and answer in a very forceful way.”

In the wake of the 2001 attacks on New York and Washington, masterminded by Osama bin Laden, then-US President George W Bush launched the war in Afghanistan in October 2001 after it was learned the Taliban was harbouring bin Laden and refused to turn him over.

The Taliban was removed from power shortly afterwards by US-led forces and bin Laden was eventually found and killed in neighbouring Pakistan in 2011.

Biden was facing a May 1 deadline agreed by the Taliban and the previous Donald Trump administration, a date that Biden had signalled he was not going to meet.

The Taliban has threatened “problems” if the US does not meet the deadline; Biden hopes that setting a new deadline with an explanation will placate them.

Based on the Taliban’s initial reaction, it does not seem to have worked.

“The Islamic Emirate of Afghanistan seeks the withdrawal of all foreign forces from our homeland on the date specified in the Doha Agreement,” Taliban spokesman Zabihullah Mujahid wrote on Twitter Tuesday.

“If the agreement is breached and foreign forces fail to exit the country on the specified date, problems will certainly be compounded and those who failed to comply with the agreement will be held responsible,” Mujahid continued.

While Biden’s announcement is supported by former President Barack Obama and being celebrated by progressive Democrats such as Senators Bernie Sanders and Elizabeth Warren, it has also raised concerns about what it means for the Afghanistan government and US national security moving forward.

Afghan President Ashraf Ghani tweeted on Wednesday that he had spoken to Biden and “The Islamic Republic of Afghanistan respects the U.S. decision and we will work with our U.S. partners to ensure a smooth transition.

“Afghanistan’s proud security and defense forces are fully capable of defending its people and country, which they have been doing all along, and for which the Afghan nation will forever remain grateful,” Ghani continued.

However, an Afghan government peace negotiator in Doha, in an interview with the DPA news agency, described the move as “the most irresponsible, selfish thing the United States could do to its Afghan partners”.

The Afghan negotiator, who spoke on the condition of anonymity, said it might be the end of the war for Washington, but that Afghan partners would pay the price.

“A full withdrawal from Afghanistan is dumber than dirt and devilishly dangerous,” said Republican Senator Lindsey Graham, according to the Associated Press. “President Biden will have, in essence, cancelled an insurance policy against another 9/11.”

An assessment from the US intelligence community released this week concluded, “The Afghan government will struggle to hold the Taliban at bay if the coalition withdraws support.”

And CIA Director William Burns told the Senate Intelligence Committee, “There is a significant risk once the US military and the coalition militaries withdraw”, although he added the US would retain “a suite of capabilities”.

White House press secretary Jen Psaki told reporters ahead of Biden’s speech that he was fully aware of these concerns but he also has also heard from the US intelligence community that “the threat has dispersed, it’s metastasised around the world … it’s changed. We’re not looking at the 2001 mindset. We can’t look at things through the 2001 mindset”.

NATO’s Stoltenberg said the withdrawal of the US and other allied forces would be the “start of a new chapter” in the relationship.

“It’s now for the Afghan people to build a sustainable peace that puts an end to violence, safeguards the human rights of all Afghans – particularly women, children, and minorities – upholds the rule of law, and ensures that Afghanistan never again serves as a safe haven for terrorists,” he said.

His views were echoed by Blinken.

“Let me be clear:  Even with our troops home, we as an alliance and the United States as a country will continue to invest in and support the Afghan people and their chosen leaders,” he said, stressing that the US and its allies would pursue “a durable and just political settlement between the Government of Afghanistan and the Taliban”.

Following his remarks, Biden visited the Arlington National Cemetery in Virginia to pay his respects to the members of the US armed forces killed in Afghanistan and Iraq. 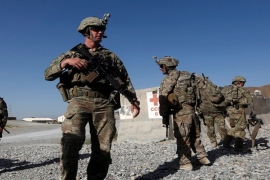 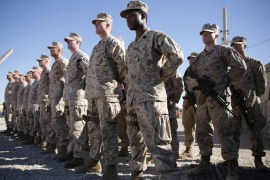 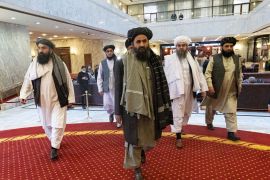 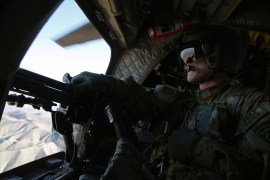