Federal investigators have found evidence that would likely allow the United States government to file sedition charges against some of those involved in the deadly January 6 breach on the US Capitol, a Justice Department official has said.

“I believe the facts do support those charges,” acting US Attorney for the District of Columbia Michael Sherwin, who had been leading the department’s inquiry into the violence, said in an interview on the CBS 60 Minutes programme, which aired on Sunday.

“I think that, as we go forward, more facts will support that,” he said.

To date, the Justice Department has filed cases against about 400 suspects involved in the assault, but none have yet been accused of sedition, the crime of opposing the authority of the US government through force.

Historically, the department has rarely brought sedition charges against defendants. However, Sherwin has maintained a willingness to pursue the charges since announcing on January 12 the creation of a special task force to investigate the breach.

So far, most arrested in connection with the riot have been charged with trespassing or assaulting officers, with a smaller number charged with conspiracy to obstruct Congress.

Two men charged with assaulting officer Brian Sicknick, who was sprayed with some kind of chemical agent during the incident and later died after scuffling with rioters, could also face murder charges “if evidence directly relates that chemical to his death”, Sherwin said.

‘Trump was the magnet’

Sherwin, who stepped down from his role leading the investigation on Friday, reiterated that the department is looking into the conduct of former President Trump, who claimed for weeks that the election had been “rigged” and “stolen” and urged his supporters to overturn the results.

Trump had also encouraged supporters to attend the January 6 rally and march on the Capitol as legislators met. He was subsequently impeached by the US House of Representatives on allegations his conduct constituted “incitement of insurrection”.

He was later acquitted in a US Senate trial, despite a history-making seven Republicans breaking from party ranks to support his conviction.

“It’s unequivocal that Trump was the magnet that brought the people to DC on the 6th,” Sherwin said. “Now the question is, is he criminally culpable for everything that happened during the siege, during the breach?”

“We have people looking at everything,” he added. 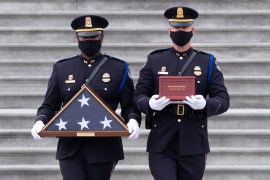 US charges two suspects for assault on fallen Capitol policeman 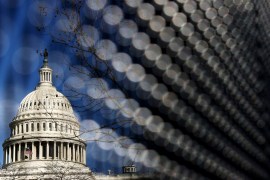 US Capitol fence to be scaled back, security questions linger

Security fence around US Capitol is the cause of ire among some legislators, who say barrier reminds them of ‘warzone’. 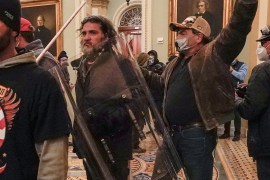