Qatar’s new minimum wage law has come into force on Saturday for hundreds of thousands of migrant workers as it becomes the first country in the region to adopt a non-discriminatory minimum wage.

The new legislation ensures all employees receive a minimum monthly wage of 1,000 Qatari riyals ($275), as well as a minimum allowance of 300 riyals for food and 500 riyals for housing, unless their employer provides both.

More than 400,000 workers – or 20 percent of the private sector – will benefit directly from the new law, according to the International Labour Organization (ILO).

According to the Qatar Government Communication Office, more than 5,000 companies have already updated their payroll systems to adhere to the new legislation.

Qatar’s Ministry of Administrative Development, Labour and Social Affairs has implemented a series of labour reforms in recent years.

Previously under Qatar’s “kafala”, or sponsorship, system, migrant workers needed to obtain their employer’s permission before changing jobs – a law that rights activists said left employees dependent on the goodwill of their bosses, and often led to abuse and exploitation.

However, migrant workers told Al Jazeera of their continued struggle while trying to change jobs, with majority of those interviewed by Al Jazeera saying they experienced delays in the process as well as threats, harassment and exploitation by the sponsor, with some of the workers ending up in prison and eventually deported.

But the Qatari government spokesperson told Al Jazeera in a statement that “in the final quarter of 2020 [when the laws were amended], the new system contributed to over 78,000 successful job transfers”.

Qatar’s treatment of migrant workers has been under the spotlight since it was awarded the hosting of football’s 2022 World Cup in 2010.

An energy-rich nation in the Gulf, Qatar has long said it is committed to labour reforms and that “lasting changes” take time.

In 2018, Qatar amended its residency law to allow most migrant workers to leave the country without an exit visa.

Hassan al-Thawadi, secretary-general of Qatar’s World Cup organising committee, has said it was the organisation’s belief that “this World Cup can be a catalyst for change, both in Qatar and in other parts of the world” when it comes to workers’ rights. 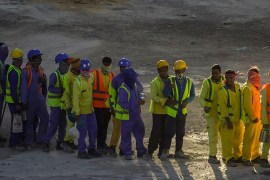 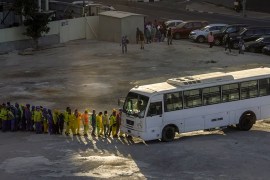