United States Secretary of State Antony Blinken and Secretary of Defense Lloyd Austin will visit Japan and South Korea next week as the administration seeks to boost regional alliances as a bulwark against China’s expanding might.

The visit is the first physical official trip outside of the US for both Blinken and Austin, although the secretary of state had previously done “virtual tours” of Canada and Mexico.

“I look forward to meeting our friends and allies in Japan and the Republic of Korea in my first in-person visit overseas as Secretary of State,” Blinken said in a tweet on Wednesday.

The trip will aim “to promote peace, security, and prosperity in the Indo-Pacific and around the world”, he said.

I look forward to meeting our friends and allies in Japan and the Republic of Korea in my first in-person visit overseas as Secretary of State. @SecDef will join me in both countries as we work to promote peace, security, and prosperity in the Indo-Pacific and around the world.

The Department of Defense in a press release said Austin will also visit India “to discuss deepening the US-India Major Defense Partnership” while in the region.

The announcement comes shortly after President Joe Biden released plans to meet virtually on Friday with the leaders of India, Japan and Australia – a grouping known as the Quadrilateral Security Dialogue, or “Quad” – in the first-ever joint meeting of the heads of the four countries.

His administration has continued his predecessor’s hawkish approach towards China but says its strategy puts more emphasis on strategic alliances and limited cooperation where possible.

On Tuesday and Wednesday, Blinken and Austin will be in Tokyo, where they will attend a US-Japan Security Consultative Committee meeting hosted by Japan’s Minister for Foreign Affairs Toshimitsu Motegi and Minister of Defense Nobuo Kishi.

The Department of Defense said the meeting will seek to emphasise the strength of the alliance as a “cornerstone of peace and security in a free and open Indo-Pacific in the face of long-term competition with China”.

On Wednesday, the US officials will travel to Seoul, where they will attend a US-Republic of Korea Foreign and Defense Ministerial hosted by the South Korean foreign minister Chung Eui-yong and Minister of Defense Suh Wook.

The trip will seek to “reaffirm the United States’ ironclad commitment to the security of the Republic of Korea”, the Department of Defense said in a statement, adding the trip will underscore its view that South Korea is a “linchpin of peace, security, and prosperity in Northeast Asia”.

Blinken is also set to meet virtually with business leaders and journalists during the trip before returning to Washington, DC on Thursday. 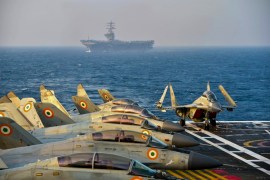 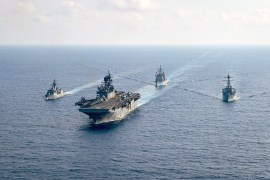 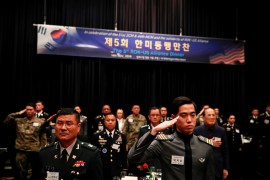 South Korea agrees to boost funding for US troops by 13.9 percent

South Korea agrees to pay 1.18 trillion won ($1.03bn) for the upkeep of US troops there, ending year-long deadlock.