Security forces in Myanmar have stormed a compound housing striking railway workers and surrounded hundreds of anti-coup protesters in two places in the main city of Yangon, as the country’s generals hired a Canadian lobbying firm to help “explain the real situation” in the Southeast Asian nation.

Photos and videos posted on social media on Wednesday showed police sealing off the Mingalar Taung Nyunt neighbourhood where the Ma Hlwa Gone train station and housing for railway workers are located.

Many of the railway staff are part of a civil disobedience movement that has crippled government business and included strikes at banks, factories and shops since the military toppled Aung San Suu Kyi’s elected government on February 1.

A 32-year-old woman who lives at the site told AFP news agency that “around 300 security personnel are blocking the road searching for the people who are involved in the civil disobedience movement”.

She said she had escaped but was worried about the remaining workers.

“I just hope they don’t arrest the people, if they do it is troubling because they could beat and kill them,” she said.

A live broadcast on Facebook earlier on Wednesday showed people chanting: “Are we staff united? Yes, we are united” and a commentator claiming police were trying to remove barricades and threatening to shoot.

There were also tense scenes in the North Okkalapa area, where security forces surrounded protesters, in an echo of the military’s efforts on Monday night to barricade protesters into Sanchaung, also in Yangon. A live video stream showed people coughing and washing their faces after tear gas was deployed and there were reports of gunfire.

“Some of [the protesters] were severely beaten, but the people are still continuing their protest,” a local rescue worker told AFP.

More than 100 people were arrested at the two sites, witnesses told Reuters.

The fresh crackdowns prompted the United States embassy to call for the troops’ withdrawal.

“We are seeing reports of innocent students and civilians surrounded by security forces in North Okkalapa, as well as arrests,” the embassy said in a statement. “We call on those security forces to withdraw from the area, release those detained, and allow people to depart safely.”

The embassies of the European Union, the United Kingdom and Denmark also expressed concern and called on the security forces to let protesters leave the area.

More reports of the #Myanmar military surrounding innocent civilians in Yangon. We again urge the security forces to allow civilians to leave without further violence or arrests.#WhatsHapppeningInMyanmar https://t.co/MB6imdeKiT

Police and army officials did not respond to requests for comment.

The military response to the now-daily protests has become increasingly violent with at least 60 people thought to have been killed in the crackdowns and nearly 2,000 arrested, according to the Assistance Association for Political Prisoners, an advocacy group that is monitoring the arrests.

On Tuesday, a National League for Democracy (NLD) official said the party’s Zaw Myat Linn had died in custody after he was detained in Yangon at about 1:30am (19:00 GMT on Monday). His wife said he had injuries to his abdomen.

The military has also stepped up actions against independent media reporting on the unrest, raiding offices and revoking licences. At least 35 journalists have been arrested since the coup, according to Myanmar Now, one of the news organisations that has come under fire. Of those arrested, 19 have since been released.

Despite the increasingly lethal tactics of security forces, protests continued on Wednesday in cities and towns across the country, including Yangon, Mandalay, Monywa, Dawei and Myitkyina.

The coup and crackdown have triggered international condemnation, with growing demands for the generals to relinquish power and release political prisoners.

“I went… to meet the parents of hundreds of students and peaceful protesters arbitrary detained,” Christian Lechervy wrote on Facebook.

In Washington, DC, State Department spokesman Ned Price said the US was “repulsed” by the military’s continued use of lethal force, and urged the security forces to use “maximum” restraint in dealing with the protests.

“The latest escalations that we’ve seen in recent days of violence, it’s just another indication of the military’s complete disregard for the people of Burma,” Price said, using another name for Myanmar. “It’s unacceptable.”

But not all countries are giving Myanmar the pariah treatment – the Sri Lankan government invited the military-appointed foreign minister to economic cooperation talks in early April.

Meanwhile, the UN Security Council has been struggling to reach an agreement on a response.

On Tuesday, the 15-member body failed to agree on a statement that would have condemned the coup, called for restraint by the military and threatened to consider “further measures”.

China, Russia, India and Vietnam all suggested amendments to the text of a British draft, according to diplomats, including the removal of a reference to a coup and a threat to consider further action.

“Every member state has a role to play individually and collectively. Collectively, we are always looking for a strong voice and strong action from the Security Council,” UN spokesman Stephane Dujarric told reporters earlier on Tuesday.

Diplomatic efforts continued as it emerged that the generals had hired a Canadian PR firm on a $2m contract to work on their behalf at international organisations including the UN, as well as with governments in the United States, Saudi Arabia, the United Arab Emirates and Russia.

Dickens and Madsen will “assist in explaining the real situation in the Country”, a filing with the US Department of Justice, said. The attached contract, dated March 4, was signed by the firm’s president and director Ari Ben-Menashe and Mya Tun Oo, who is the defence minister in the military administration.

Some police have refused orders to fire on unarmed protesters and have fled to neighbouring India, Reuters reported, citing an interview with one officer and classified Indian police documents.

“As the civil disobedience movement is gaining momentum and protest(s) held by anti-coup protesters at different places we are instructed to shoot at the protesters,” four officers said in a joint statement to police in the Indian city of Mizoram.

“In such a scenario, we don’t have the guts to shoot at our own people who are peaceful demonstrators,” they said.

The army has said the coup was necessary because of fraud in the November election, which the NLD won in a landslide. The elections commission has rejected its claims, and its members were among those arrested when the generals seized power. 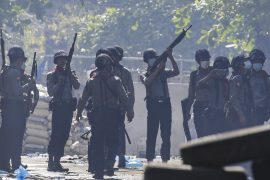 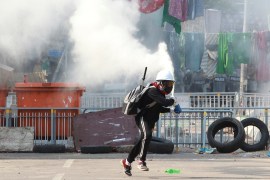 The NLD’s Zaw Myat Linn is the second party figure to die in detention in recent days. 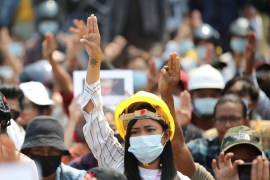