Geneva, Switzerland – Members of a newly elected Libyan interim government pledged in Geneva this week to take the country to national elections on December 24 of this year, an ambitious timeline studded with almost impossible challenges.

The interim authorities nominated by the 75-member Libyan Political Dialogue Forum (LPDF) under the umbrella of the United Nations are to replace the Government of National Accord (GNA), considered no longer able to usher the country into a phase of national reconciliation and state-building.

The three-member Presidential Council (PC) and the prime minister will have the crucial task of preparing the ground for fair and transparent national elections and ensuring the safe participation of their citizens in the electoral process.

For elections to take place, the GNA and the outgoing PC will have to peacefully dissolve to give way to the new unity executive, which will require the endorsement of Libya’s parliament. Conflicting financial institutions will have to be unified, armed groups dismantled, essential civil infrastructure repaired, and security restored to allow half a million internally displaced citizens to return home and take part in the elections.

If foreign interference were to cease, the interim government would be capable of implementing all the above by the election deadline, according to Stephanie Williams, the outgoing UN acting special envoy for Libya. Realistically, the 10-month long path that separates Libyans from the ballot box looks rather like a minefield to supporters of the vote.

Restoring security to allow citizens’ participation in the war-ravaged country where armed groups and militias control vast areas of territory is the most difficult challenge.

Libyans have witnessed a precarious ceasefire since October last year, when military officers from the two main power contenders, the UN-recognised GNA in Tripoli and renegade military commander General Khalifa Haftar in the east, brokered an end to hostilities.

However, the two sides have exploited the relative calm to entrench their positions in central Libya along the Sirte-Jufra “red-line” and to rearm. Haftar’s Libyan Arab Armed Forces (LAAF), supported by Russia, Egypt, and the United Arab Emirates, have been strengthening control over airbases in Sirte and in the southern region to prevent an advance of Tripoli’s militias further east.

Meanwhile, Tripoli’s GNA continues to receive assistance and supplies from its main ally, Turkey, and the outgoing PC has created a new security agency led by prominent armed groups under its control.

The two sides, therefore, have regrouped and resupplied seemingly getting ready for a resumption of hostilities. Thousands of foreign fighters remain in the country despite an exit deadline set by the ceasefire agreement that expired on January 23.

“Realistically, I don’t think we are beyond the military phase in Libya,” Mustafa Fetouri, a Libyan academic and journalist told Al Jazeera. “I think another violent phase is unfolding.”

Despite the military build-up, the Joint Military Commission that brokered the ceasefire, dubbed the “5+5”, is considered unanimously as the most effective of the three negotiating tracks conducted so far, including economic and political talks.

The ceasefire has allowed a stalling political dialogue to gain momentum, with some productive meetings between political and regional factions within the LPDF taking place in recent months in Tunisia, Egypt and ultimately, Geneva.

With the ceasefire holding, members from the two rival parliaments, the Western High Council of State (HCS) and the Eastern House of Representatives (HoR), met last months and called for a national referendum to approve a new draft constitution ahead of December elections.

The draft constitution will determine the future state system, its founding principles and the relations of the three main branches of power – the legislative, executive and judicial. The constitutional referendum, whose date has yet to be announced, is intended to allow Libyans to discuss the principles of the constitutional draft and decide whether to accept or reject it.

“Libyans need to have an open debate about this draft proposal and accept it or reject it if need be,” I’timad al-Musallati, a member of the Drafting Committee, told Al Jazeera.

But while a public debate on the new constitution, although overdue, would be desirable, it may take time. In addition, the zeal of the two rival parliaments in support of the referendum after stalling the constitutional draft for almost four years has raised suspicion in different quarters.

“Elections are welcome but we must focus on the constitution,” Bachir al-Haouch, a member of the High Council of State, told reporters in November.

Some fear a constitutional referendum ahead of elections may be used as a diversionary manoeuvre to procrastinate the vote and perpetrate the status-quo.

“There is a group of spoilers both in Benghazi and Tripoli that do not want to loosen their grip on power or see change in Libya,” Karim Mezran, resident senior fellow at the Atlantic Council, told Al Jazeera.

“The constitutional process has been hijacked since its inception with the result that now we have a flawed draft constitution that nobody likes and a constitutional referendum that, if not approved, may stall indefinitely the political process.”

The draft constitution was approved in 2017 by the Constitutional Drafting Assembly (CDA), a 60-member body appointed by National Transitional Council after the overthrow of Muammar Gaddafi in 2011.

The House of Representatives, Libya’s eastern parliament, rejected the CDA and stalled the constitutional draft until November 2018 when it passed a referendum law.

The constitution provides for a presidential form of government in which the president’s powers are wide and decentralisation is limited. This triggered the protests of minority groups and undermined the work of the CDA from its onset.

The Amazigh boycotted the CDA, while the Tabu and Tuareg left the working committee feeling they were underrepresented. The Gaddafi regime had branded Libya as a homogenous Arab Muslim state neglecting ethnic, linguistic and religious minorities. Now, these groups believe the constitutional draft betrayed their expectation and did not grant the level of autonomy they were hoping for in a future decentralised state.

In addition, the draft raised concerns about the state system and its democratic safeguards, with some jurists warning of the risk the future state may backslide into an oppressive regime.

“We observed that some articles of the draft constitution clashed with provisions of the international law in terms of human rights, minority rights, as well as the future state system, but most of our remarks haven’t been acknowledged,” Vito Todeschini, a jurist with the International Jurists Commissions, told Al Jazeera.

The draft presents other significant loopholes, said Todeschini. For example, while the army and police would be subject to the civilian authority, there is no mention of the prerogatives of the supreme commander. There is also no mention of the intelligence services, with the risk that security agencies may sprout up without any civilian oversight.

While the constitution calls for the establishment of a High Judicial Council and a constitutional court as the highest jurisdictions on constitutional issues, no mention is made on their composition or appointment mechanism. This vacuum leaves the judicial framework vulnerable to be exploited by political groups in the future.

The drafters, however, say the constitutional draft meets the demands of Libyans for a return to presidentialism, after years of protracted civil war and political stagnation blamed in part on the ineptitude of some members of Parliament.

“This constitution is a good starting point and the best possible synthesis of the expectations of Libyans from across the country,” said al-Musallati.

“There cannot be elections without a constitution in place, or else any future system of government will be considered illegitimate.”

Al-Musallati accused the political factions of obstructing the constitutional draft over the years for fear of an overhaul of the existing power centres as envisaged by the new constitution. But she insisted Libyans should not go to elections without it. “If rejected, it will have to go back to the CDA and we will have to redraft it until it meets the people’s expectations.”

It remains unclear to what extent Libya’s key political forces will support the draft. There is a possibility they may encourage Libyans to vote against it, or they may simply refuse to comply with its provisions and delay elections indeterminately.

“I don’t think the country can go to election in this context,” said Fetouri. “But Libyans are fed up and they may just pass the referendum hoping it will contribute to ending their misery. Although public opinion seems to be against this draft constitution.”

But Libyans may escape the risk of having a faulty constitution in place by simply following the example of their Tunisian neighbours, said Mezran.

In the aftermath of the 2011 revolution, Tunisians voted a Constituent Assembly of 217 members who produced a constitution considered one of the most liberal in the Arab world.

“Libyans should vote a new parliament to function as a Constitutional Assembly that would write the constitution. It would be accepted nationwide because it would be an expression of the people’s demands,” said Mezran.

On Tuesday, members of the two Houses and the High National Elections Commission (HNEC) will meet again to discuss the threshold for the upcoming referendum and maybe set a date. Meanwhile, February 19 is the deadline for the concerned institutions to come forward with the constitutional basis for the holding of elections, an event far from granted. 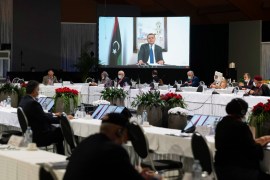 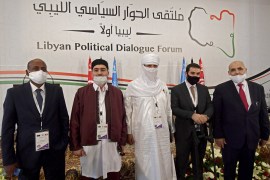 The 75-member forum represents Libya’s main regions, each to be represented on a three-member presidential council. 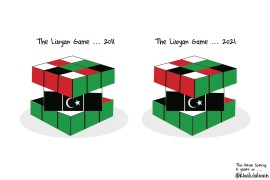