Islamabad, Pakistan – A Pakistani court has granted police custody of Muhammad Ismail, the father of a prominent Pakistani human rights activist, on “terrorism” charges that rights groups say are part of a sustained campaign of harassment.

The court in the northwest Pakistani city of Peshawar granted police custody of Muhammad for three days during proceedings on Wednesday, his daughter, Gulalai Ismail, told Al Jazeera. The 66-year-old had been arrested a day earlier at a bail confirmation hearing.

Gulalai, a prominent and award-winning women’s rights activist, is a leading member of the Pashtun Tahaffuz Movement (PTM) rights group that calls for accountability for Pakistan’s powerful military for alleged rights abuses committed during its war against the Tehreek-e-Taliban Pakistan and its allies.

The PTM and other rights groups have documented hundreds of cases of enforced disappearances and alleged extrajudicial killings during the campaign in the country’s northwest. Its leaders, including members of Parliament, have faced a widespread campaign of arrests and legal cases against them across Pakistan since the group’s formation in 2018.

In 2019, Gulalai was forced into hiding due to threats against her life, with security services seeking her arrest in a number of cases, including charging her with “sedition” for remarks made during a speech at a PTM rally.

Later that year, she surfaced in the United States, where she is seeking political asylum.

“They just want to harass my family and to break their nerves,” said Gulalai. “To break their morale to set a precedent, that if any […] father lets his daughter speak her mind and use her freedom of expression, then the parents will also not meet a good fate.”

Muhammad is a retired professor of Urdu language and lives with his 62-year-old wife, Uzlifat, in a modest suburb of the Pakistani capital, Islamabad. 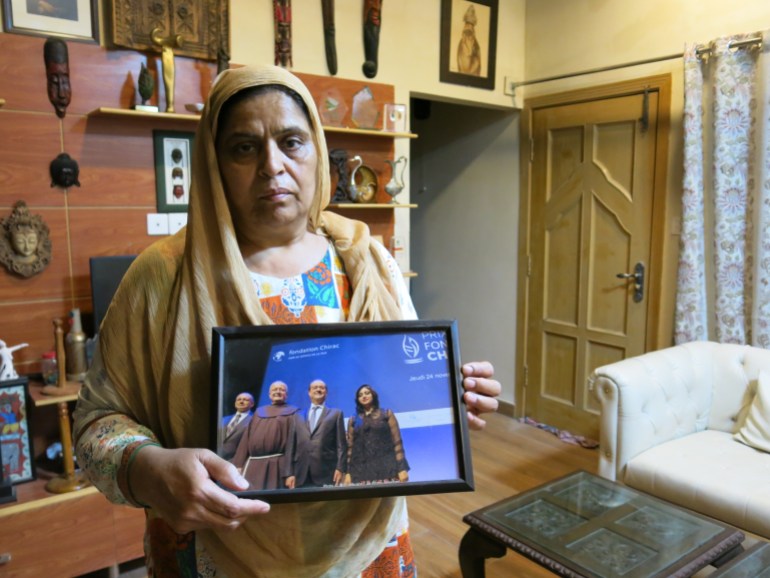 Following Gulalai’s escape from the country, both her parents were charged with “terrorism financing” in a case that went on for more than a year. In July 2020, that case was dismissed by a Peshawar anti-terrorism court judge for lack of evidence.

The Ismail family denied the allegations.

Separately, authorities filed a second case against Muhammad alleging he was sharing “anti-state” content on social media. Hearings, in that case, are ongoing, with a judge in January ordering him to stop sharing “objectionable content”.

“Honouring the orders of the court, I hereby surrender my right to share my dissident voices on social media, therefore say goodbye to Facebook and Twitter,” Muhammad told Al Jazeera after that hearing.

He was arrested on Tuesday after a judge ruled to deny him confirmation of interim bail granted a day earlier in the “terrorism” case. Uzlifat, his wife, implicated in the same case, was granted bail.

“He has been abducted, forced to make multiple court appearances and faces a travel ban since 2019. Now that he’s been detained, at great risk to his already precarious health – made worse by a recent COVID-19 diagnosis – the charges against him must be dropped immediately.”

The arrest of Muhammad comes amid a tightening of space for freedom of expression, particularly criticism of the powerful military, and human rights work in Pakistan.

On Monday, the Peshawar High Court ruled to allow the trial of human rights activist Idrees Khattak by a military court on espionage charges.

Khattak, a prominent rights activist, was abducted by unidentified men in November 2019 while travelling in his car. Months later, Pakistan’s military admitted he was in their custody as they investigated him under the country’s Official Secrets Act.

On Monday, the government’s lawyer contended Khattak was being tried for having held meetings more than 10 years ago with Michael Semple, an academic and former United Nations official who Pakistan considers an agent of British foreign intelligence agency MI6.