The number of inmates killed in riots at three separate prisons in Ecuador this week has increased to 79, authorities said on Wednesday, after they regained control of the facilities.

Hundreds of police officers and military personnel were deployed after coordinated fights between rival gangs broke out in the prisons’ maximum-security wings on Monday night.

Authorities said the gangs began a battle for leadership within the prison system in December when a leader of Los Choneros, considered the most powerful gang, was killed in a shopping centre several months after being released.

Ecuadorian President Lenin Moreno said Tuesday was a “tragic day for the country” – as dozens of prisoners were first reported dead – and blamed overpopulation within the prison system, as well as a lack of personnel and resources, for the violence.

In earlier messages, he expressed his condolences to the families of those killed and pledged to hold those responsible accountable.

“What happened yesterday was no coincidence,” Moreno said in a video posted on Twitter. “It was organised from outside the prison, orchestrated by those who are in dispute over leadership and drug trafficking across our national territory.”

The detention facilities where the riots took place account for 70 percent of the country’s prison population.

On Tuesday, television footage showed some prisoners jumping from high walls and others forcing open prison doors but police and the military stopped them.

SNAI said all those killed during the rioting were prisoners.

“Thanks to the actions carried out between this institution and the National Police, the situation … is under control,” the agency said in a statement.

Police said inmates in two prisons in Guayaquil tried to continue fighting on Wednesday, but at least 400 officers reinforced security there.

Moreno declared a state of emergency in Ecuador’s prison system in 2019 after at least 24 were killed in a wave of incidents.

According to the office of Ecuador’s human rights ombudsman, 103 inmates were killed in prisons in 2020.

United Nations representatives have called for “a prompt and impartial investigation” into this week’s deadly riots, as well as “corresponding sanction to those responsible”.

In order to reduce prisoner numbers during the COVID-19 pandemic, the government commuted the sentences of people convicted of minor offences to reduce overcrowding.

But Ecuador’s prison system, whose facilities were designed for some 27,000 inmates, still house about 38,000 people despite the reduction.

On Wednesday, relatives of the inmates continued to gather outside the prisons hoping for information about their loved ones.

Digna Pacho, 63, said she had travelled 14 hours by bus to fetch the remains of her son Jacson, whom she called “Nato”.

Pacho said she wanted to bury her son, who was serving a 35-year prison sentence, in her hometown of Esmeraldas, in the country’s north.

“I just want them to give me Jacson’s body and I’ll go back to Esmeraldas.” 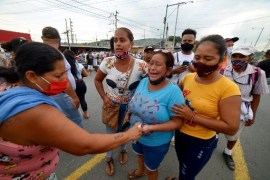 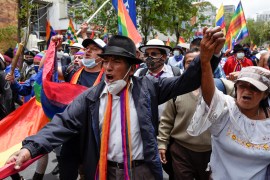 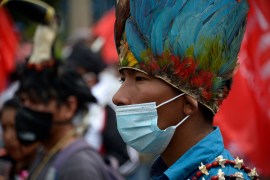 Indigenous presidential candidate Perez wants recount in 17 of Ecuador’s 24 provinces as his supporters rally in Quito.