Kidnappers released 53 people, including women and children, seized on a bus in Nigeria while dozens of others taken from a school in a separate attack are still missing.

Criminal gangs in northwestern and central Nigeria have scaled up attacks in recent years, kidnapping, raping and pillaging.

A gang last week seized 53 people, including 20 women and nine children, who were travelling on a state-owned bus in Kundu village in Niger State.

“I was delighted to receive the 53 … bus passengers who were abducted by armed bandits a week ago,” the governor of Niger State, Abubakar Sani Bello, said in a tweet late on Sunday.

I was delighted to receive the 53 released NSTA bus passengers who were abducted by armed bandits a week ago.

We are currently doing all that we can to secure the release of abducted students of GSC, Kagara and return them safely to their parents. pic.twitter.com/RNIxAtl4fD

It is unknown if a ransom was paid but state representatives have previously said they would not pay any.

“We went through one week of dialogue, consultations, hard work and sleepless nights because we had to secure their release within the shortest possible time,” the governor’s spokeswoman, Mary Noel-Berje, said in a statement.

The freed bus passengers received medical check-ups before being reunited with their families, she added.

In a separate incident, 42 people, including 27 schoolboys, were abducted from a school last week and are still missing.

“The Students of the Government Science College Kagara are still in the hands of their captives but everything is being done to ensure their release,” Noel-Berje said.

Attacks on a ‘daily basis’

Gunmen last week killed 10 people and abducted at least 23 others in two separate attacks in the state.

“We are witnessing these attacks now, almost, on daily basis and it is worrisome,” Noel-Berje said at the time.

The attackers are known to hide in camps in the Rugu forest, which straddles Zamfara, Katsina, Kaduna and Niger states. Despite the deployment of troops, deadly attacks persist.

The gangs are largely driven by financial motives and have no known ideological leanings.

But there is growing concern they are being infiltrated by armed groups from the northeast that are waging a decade-old rebellion to establish a so-called “Islamic state”.

The latest mass abduction came just two months after 300 students were kidnapped from a school in Kankara in nearby Katsina, President Muhammadu Buhari’s home state, while the president was visiting the region.

The boys were later released after negotiations with government officials, but the incident triggered outrage and memories of the kidnappings of Nigerian schoolgirls by armed fighters in Dapchi and Chibok that shocked the world.

Out of some 276 girls who were kidnapped by the Boko Haram group from Chibok, at least 100 are still unaccounted for. 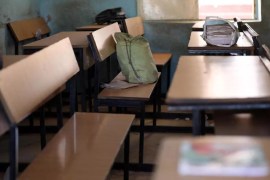 Why are schoolchildren increasingly being kidnapped in Nigeria?

Students were abducted by gunmen who stormed a boarding school in a north-central town on Wednesday. 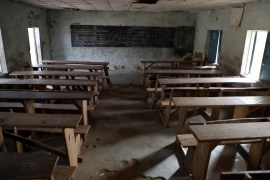 ‘On their heels’: Nigerian forces say kidnappers being tracked 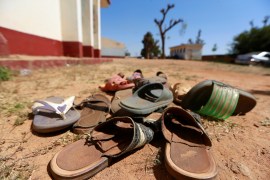 President Buhari has condemned abduction of 27 students from a secondary school in Niger state.