“We are going to work to undo the moral and national shame of the previous administration that literally, not figuratively, ripped children from the arms of their families,” he said.

Biden announced he will create a task force to reunite migrant families who were separated at the US-Mexico border by Trump’s 2018 “zero tolerance” border strategy.

About 5,500 children have been identified in court documents as having been separated from their parents during Trump’s presidency, including about 600 whose parents have yet to be found by a court-appointed committee.

Alejandro Mayorkas, who was confirmed as the new secretary of Homeland Security on Tuesday, will lead the task force, focused largely on reuniting parents and children who remain apart.

Biden also ordered a review of border security, which includes a policy that made asylum seekers wait in Mexican border cities for hearings in US immigration court.

We’re grateful the Biden administration is prioritizing undoing the harm of the last four years & we’ll continue to fight until everyone in this country has the freedom to thrive. 3/4

That is a step towards fulfilling a campaign pledge to end the “Remain in Mexico” policy, known officially as the Migrant Protection Protocols, which enrolled nearly 70,000 asylum-seekers since it began in January 2019.

The White House had earlier said that Tuesday’s orders aim to do a “top-to-bottom review of recent regulations, policies, and guidance that have set up barriers to our legal immigration system”.

They will also include a review of Trump’s “public charge rule”, which makes it more difficult for people who use government benefits to obtain green cards.

With proposed legislation to give legal status and a path to citizenship to an estimated 11 million people in the country without documentation, Biden has quickly taken aim at many of Trump’s sweeping changes to deter immigration.

In a factsheet, the White House said it aims to “create a humane asylum system” by rescinding or reconsidering Trump policies that caused “chaos, cruelty and confusion”. It warned that it will take time, however.

“The situation at the border will not transform overnight, due in large part to the damage done over the last four years,” the factsheet states. “But the President is committed to an approach that keeps our country safe, strong, and prosperous and that also aligns with our values.” 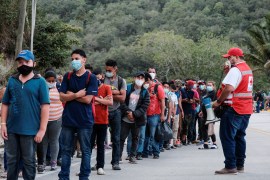 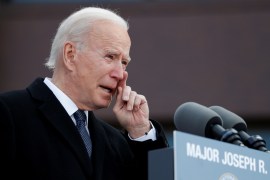 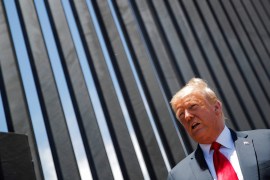 US high court to determine legality of ‘Remain in Mexico’ and funding for Trump’s border wall in 2021.