Head nurse Veronica Luz Machado, who for months has battled the coronavirus pandemic from an intensive care unit in the northern Colombian city of Sincelejo, became the first person in the Andean country to receive a COVID-19 vaccine on Wednesday.

Beginning with Machado, Colombia will kick off its plan to immunise 35.2 million people with vaccines acquired through a raft of bilateral deals as well as the World Health Organization-backed COVAX mechanism.

“The pandemic really changed our lives completely, particularly for me and my colleagues, because we were facing an unknown virus, we didn’t know how to respond,” Machado, who works at Hospital Universitario, said in a government broadcast earlier this week, before receiving the first shot of Pfizer-BioNTech’s two-dose vaccine.

“It’s a risk that health workers face every day when we leave our homes to come to work in what we enjoy, in what we are passionate about. I was very afraid,” Machado, a nurse for more than two decades, added.

For Machado, the vaccine brings hope following almost a year of coronavirus cases in Colombia, which has reported more than 2.2 million infections and 57,949 deaths, according to data compiled by Johns Hopkins University. The country has a population of about 50 million people.

“Today begins a new chapter, in which this pandemic is defeated. This chapter begins with mass, safe, effective and free vaccination across the country,” said President Ivan Duque who attended Machado’s first injection.

The first phase of Colombia’s vaccinations will benefit healthcare personnel and those aged 80 and over.

The government plans to immunise one million people during the first month of inoculations, which it has described as the greatest public health challenge in the country’s history.

The first 50,000 Pfizer doses arrived in Colombia on Monday, while a second batch of 192,000 doses from China’s Sinovac Biotech is expected to arrive this weekend, Duque said in a message on Twitter earlier this week.

Meanwhile, Mexico, which has topped two million confirmed coronavirus cases and 175,000 deaths, has just begun vaccinating the elderly. Officials say some 189,000 doses had been administered in the first two days of the campaign. There are about 15.7 million people over 60 who need the shots.

Mexico has received only about 1.9 million doses of the Pfizer and Oxford-AstraZeneca vaccines so far, enough for about one million people in a nation of 126 million.

On Tuesday, Foreign Relations Secretary Marcelo Ebrard said Mexico would bring up the issue of unequal access to vaccines among nations at the UN Security Council on Wednesday.

Ebrard complained that countries that produce vaccines have had far greater access to the shots than those that do not.

Rio de Janeiro halted new vaccinations for a week on Wednesday due to a shortage of doses, one of a growing number of Brazilian cities that have run low on supplies and are demanding help from Brazil’s federal government.

City officials in Rio said they will continue to deliver second doses to those who have already been injected once, but have paused new shots for the elderly.

Other state capitals have had to adopt similar strategies, such as Salvador, in the northeastern state of Bahia, and Cuiaba, in Mato Grosso state. Looming shortages have also been reported in at least four other capitals, according to Brazilian newspaper O Globo.

Officials say vaccines for new recipients ran out partly because they had pushed forward their schedule by one week after receiving a fresh lot of doses. Rio Mayor Eduardo Paes said on Monday that additional shots will not be delivered before next week.

“We are ready and we have already vaccinated 244,852 people,” he said on his official Twitter profile. “We just need the vaccine to arrive.” 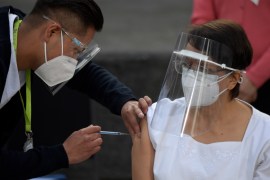 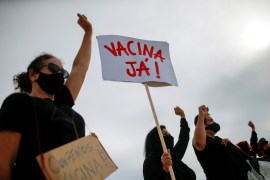 COVAX to send millions of AstraZeneca shots to Latin America 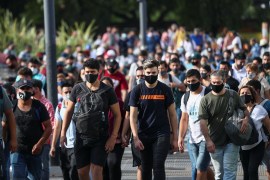 The region’s 4.1% forecasted growth for 2021 is dependent on effective vaccine roll-outs and recovery of the US economy.