After record-high rates of infections and deaths throughout January, Mexico’s sprawling capital Mexico City lowered its danger level from red to orange on Friday, amid a drop in new coronavirus cases and hospitalisations.

But the much-needed respite in cases, experts said, is likely short-lived as the nation confronts a stalled vaccination campaign and a president who has continued to downplay the threats of a pandemic that has killed more than 171,000 people in Mexico, the third-highest death toll in the world.

“As long as we don’t increase vaccinations, things are not going to get better anytime soon,” said Fernando Alarid Escudero, an assistant professor at the Center for Research and Teaching in Economics (CIDE) in Mexico, who has been developing models charting the spread of the epidemic in Mexico.

Despite Mexico City Mayor Claudia Sheinbaum’s warning on Friday for residents not to lower their guard, “as soon as people start increasing their number of social contacts,” Alarid Escudero added, “we can expect to see an increase in cases.”

Mexico’s vaccination roll-out started out well – on December 23, it was the first country in Latin America to receive a vaccine shipment. But the campaign has since stalled amid mismanagement and a global shortage in vaccine production.

So far, only 0.56 percent of Mexicans have been vaccinated, regionally lagging behind Brazil and Chile, according to data compiled by Oxford University’s Our World in Data.

The country’s health ministry said Mexico has received 766,350 doses of the two-dose regimen Pfizer vaccine, well short of the 34.4 million it was expecting to arrive in weekly shipments by March. Most of the doses have already been administered, leaving many without access to a second dose, and the country scrambling to find other sources.

On Thursday, Mexico announced it had received ingredients to manufacture China’s CanSino vaccine, enough to produce two million doses. A day earlier, Mexico gave emergency approval for the use of the CanSino and the Sinovac vaccine, another Chinese vaccine.

Mexico also expected a shipment of one million doses on Sunday from India of the AstraZeneca vaccine.

Last week, Deputy Health Minister Hugo Lopez-Gatell said the administration has a contract for 7.4 million doses of Russia’s Sputnik V vaccine, with an initial delivery due later in February. All these upcoming shipments, officials said, would allow the country to finish inoculating front-line workers, and begin vaccinating the elderly.

Carlos Peterson, a Mexico senior analyst for the Eurasia Group said that, despite the bumpy start, Mexico – Latin America’s second-largest economy – is well positioned to carry out an effective vaccination campaign, once the doses become available.

“The infrastructure is there, the expertise within the health institutions of the country exists,” Peterson said. “Once they start vaccinating, they might not be very organised, but they will start vaccinating people fairly quickly.”

Many observers have put the blame for the slow roll-out of vaccinations squarely on President Andres Manuel Lopez Obrador who, even after spending two weeks at home with a bout of the coronavirus, said he will continue to not wear a mask in public.

“No, no,” he said of mask wearing on his first day back at work on Monday. “Now, additionally, according to the doctors, I am not contagious,” he said.

Analysts said the president’s unwillingness to model good behaviour, including social distancing and wearing a mask, has been indicative of not only his attitude of downplaying the threat of the virus, but of his wider mishandling of the pandemic.

“There’s a lot of disappointment,” said Tony Payan, director of the Center for the United States and Mexico at the Baker Institute.

“People were hoping he (Lopez Obrador]) would overcome the disease and it would be a lesson learned for him to recalibrate and reconsider his approach to the pandemic.”

“But instead he has doubled down.”

Lopez Obrador has resisted shutting the nation’s borders or imposing nationwide lockdowns, arguing it would heavily affect the millions of Mexicans who live hand-to-mouth. Still, the country’s gross domestic product plunged 4.5 percent in 2020 – the sharpest contraction in decades.

Instead, the president has been focused on a plan to vaccinate Mexicans as quickly as possible.

But there are concerns that the roll-out in the nation of 130 million people might face challenges that could further undermine faith in the government’s ability to rein in the pandemic.

A health ministry website launched in early February that was supposed to allow people to register for appointments did not function properly and then crashed, triggering an avalanche of criticism on social media.

“The launch of the website that they are using to organise the vaccination campaign is a disaster,” Christopher Wilson, global fellow with the Mexico Institute at the Wilson Center, told Al Jazeera.

Wilson added that some of the disjointed results may be because Lopez Obrador charged his foreign minister, Marcelo Ebrard, with acquiring vaccines, rather than allowing the health ministry to lead the effort.

Even with its third-place rank in global fatalities, the true number of Mexicans killed by COVID is feared to be even higher. A recent analysis of excess deaths in Mexico City showed from November 1, 2020, until January 31, 2021, more than 77,000 people died – 123 percent more people than in past years, and more than twice the official coronavirus death toll of 29,146 in the city during the same period.

Alarid Escuerdo said current data showed that the country was likely to continue to see a decrease in the number of cases in the coming few weeks.

But amid a stalled vaccination campaign and the spread of new variants – infections, hospitalisations and deaths are likely to surge again in the weeks and months ahead.

“We have a president who does not promote the use of masks,” Alarid Escudero said, “and we don’t have enough vaccinations and people are not really in lockdown. So we have the three worst ingredients that you can possibly have, to prevent the further spread of the pandemic.” 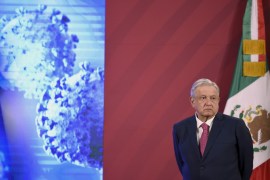 The 67-year-old leader appears in a video message from the National Palace to allay concerns about his condition. 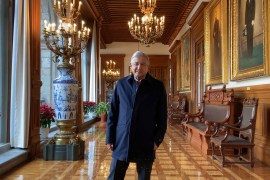 Lopez Obrador, who refused for months to wear a mask, was said to have suffered mild symptoms. 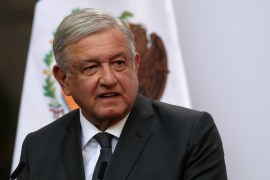 Mexico president warns against believing US now has ‘open doors’

Lopez Obrador urged migrants not to believe traffickers who tell them they could get US legal status immediately.