Donald Trump, the former president of the United States, has welcomed his acquittal in a second impeachment trial, saying his political movement “to Make America Great Again has only just begun”.

The US Senate voted 57-43 in favour of convicting the former president on Saturday, falling short of the two-thirds majority needed to convict him on a charge of inciting the mob that attacked the US Capitol on January 6, during the certification of Democrat Joe Biden’s election win.

In a statement shortly after the acquittal, Trump called the trial “yet another phase of the greatest witch hunt in the history of our nation”.

“Our historic, patriotic and beautiful movement to Make America Great Again has only just begun,” he said.

“In the months ahead, I have much to share with you, and I look forward to continuing our incredible journey together to achieve American greatness for all of our people,” he added.

Trump left office on January 20, so impeachment could not be used to remove him from power.

But Democrats had hoped to secure a conviction to hold the 74-year-old responsible for the Capitol siege and set the stage for a vote to bar him from serving in public office again.

Though Trump was acquitted of the sole charge of incitement of insurrection, seven Republicans joined all Democrats in voting to convict the former president. The figure marked the largest number of Senators to ever vote to find a president of their own party guilty of an impeachment count of high crimes and misdemeanours.

They were Richard Burr of North Carolina, Bill Cassidy of Louisiana, Susan Collins of Maine, Lisa Murkowski of Alaska, Mitt Romney of Utah, Ben Sasse of Nebraska and Patrick Toomey of Pennsylvania.

In a statement late on Saturday, Biden said “while the final vote did not lead to a conviction, the substance of the charge is not in dispute”.

He pointed out that even those who voted against the conviction “believe Donald Trump was guilty of a ‘disgraceful dereliction of duty’ and ‘practically and morally responsible for provoking’ the violence unleashed on the Capitol”.

Al Jazeera’s Andy Gallacher, reporting from West Palm Beach in Florida, said, “The one message from Trump’ statement is that he is going nowhere.”

“There is no question now that Donald Trump has political plans going forward. But what are they? Is he going to run in 2024 as many people believe? Or is he going to seek revenge on those seven Republicans who voted against him?”

But the Senate still has never convicted an impeached president.

After Saturday’s verdict, Senate Republican Leader Mitch McConnell, who voted “not guilty” in the trial and had blocked earlier efforts to bring the article of impeachment to the Senate before Trump’s term in office ended, offered scathing remarks about the former president.

“There is no question that President Trump is practically and morally responsible for provoking the events of the day,” he said. “The people who stormed this building believed they were acting on the wishes and instructions of their president.”

McConnell suggested that Trump could still face criminal prosecution for his acts, however.

“President Trump is still liable for everything he did while he was in office as an ordinary citizen,” McConnell said. “He didn’t get away with anything. Yet.”

The minority leader was not the only Republican to castigate Trump for his behaviour after voting for acquittal.

“The question I must answer is not whether President Trump said and did things that were reckless and encouraged the mob. I believe that happened,” Senator Rob Portman in a statement.

“My decision was based on my reading of the Constitution,” the Ohio Republican added. “I believe the Framers understood that convicting a former president and disqualifying him or her from running again pulls people further apart.”

Senator Chuck Grassley, the Senate’s most senior Republican, described Trump’s language in a fiery speech to supporters just before the Capitol assault as “extreme, aggressive and irresponsible”. But he said the Senate had no jurisdiction to hold a trial, agreed with Trump’s legal team that the former president deserved more “due process” and said the prosecution had not made their case.

Claire Finkelstein, professor of law at the University of Pennsylvania, said most of the Republicans who had voted to convict Trump were politicians who were not planning to run for office again.

“Those who are steadfast in insisting on the innocence of Donald Trump here are primarily those with political ambitions. They have fused themselves to Donald Trump. And he will control the agenda. And it gives him a wonderful platform from which to run again in 2024,” she told Al Jazeera.

McConnel has a “serious problem keeping his party together”, she said, which is why the Senate Republican leader voted “not guilty” despite later rebuking Trump and holding responsible for the storming of the US capitol.

Despite the apparent division within Republican ranks, Al Jazeera’s Gallacher said the outcome of Saturday’s vote demonstrated that the Republican Party still belonged to Trump.

“The impact of this man can’t be overstated,” said Gallacher.

“Over the last few years, he managed to remake the entire Republican Party in his own image.

“But the question is if that the image the Republican Party wants going forward? Also, what elections can they win when he appeals to a large majority of people, who tend to be white, non-college-educated people? You can’t win elections in the future with such a small demographic in a country like this that is changing so rapidly.” 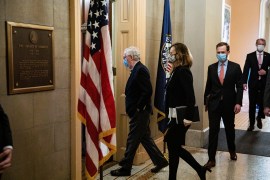 Donald Trump was acquitted on a charge of ‘incitement of insurrection’ over the January 6 US Capitol riot. 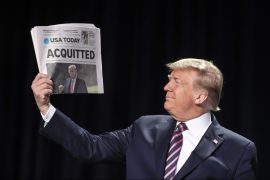 Donald Trump acquitted on charge of inciting US Capitol riot

US Senate fails to muster enough votes to convict the former president in his historic second impeachment trial. 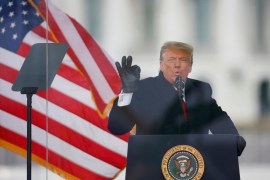 US lawmakers and other public figures react to Senate vote finding Donald Trump not guilty of inciting Capitol riot.