A group of mostly Central American migrants and asylum seekers walking across southern Mexico will now head to the US border, rather than Mexico City as originally planned, a leader has said.

Irineo Mujica, an immigrant activist who has been organising the group, said in a video that he will try to organise another caravan of thousands of migrants to reach the Gulf coast state of Veracruz, where both groups will join up and set out for the US border.

The original group set off on foot from the city of Tapachula, near the Guatemalan border, on October 23, but have faced dangerous heat conditions and have made slow progress.

The group, which initially included 4,000 migrants and asylum seekers, has advanced only about 150km (95 miles) in almost two weeks. Their numbers have reportedly dwindled to as little as 1,300 people.

The apparent change in plans comes after Mujica said the group has been pursued and harassed by Mexican government officials. The tensions resulted in a clash between Mexico’s National Guard and members of the group last week. Mexican authorities said five guards were injured, while advocates said at least two migrants were badly beaten.

On Monday, the group received a cold welcome when they entered the state of Oaxaca, as the town of Chahuites initially refused to let them enter for fear of spreading COVID-19.

The Mexican government has been attempting to discourage the march, saying the poor conditions are putting the migrants’ lives at risk. The National Immigration Institute said six cases of the tropical fever dengue had been detected among members of the migrant march but had not previously mentioned cases of coronavirus.

Adrian Aguirre, a migrant from Nicaragua, told the Associated Press news agency that when the group arrived in Chahuites, “There were municipal police cars blocking the way, and then later we entered.”

Meanwhile, many of the town’s stores closed when they saw the migrants coming, meaning they could not buy food or drink. They instead settled in a park to spend the night.

While the current caravan is much smaller than previous groups that crossed Mexico in 2018 and 2019, their attempt to make the journey almost completely by foot has been particularly daunting.

While members of earlier caravans often caught rides from truck drivers along the way, Mexico has sought to discourage the practice, saying drivers could face trafficking charges.

Meanwhile, relations between authorities and the caravan have grown increasingly fraught.

On November 1, National Guard officers opened fire on a pick-up truck carrying members of the caravan, killing a Cuban man and injuring four others.

Authorities initially said the vehicle tried to avoid an immigration checkpoint. The national guard said it tried to ram a patrol vehicle.

However, Mexican President Andres Manuel Lopez Obrador later said the shooting was unjustified, and that the truck, apparently driven by a suspected migrant trafficker, had simply tried to run past the checkpoint, not ram the Guard vehicle.

The guard officers involved are now subject to a federal criminal investigation.

Then on November 4, National Guard officers were tailing the march and had apparently tried to detain some people when a group of 100 to 150 men started throwing rocks at them.

The Guard said in a statement that four male officers and one female officer suffered “considerable” injuries, and were hospitalised. It said that “at no time did the officers respond to the attack.”

An advocate later told the Reuters news agency that two migrants had been “badly beaten” during the standoff.

Amid a surge in migrants and asylum seekers attempting to reach the US-Mexico border, Mexico’s strategy has been to contain large groups in the country’s south and allow them to apply for asylum in Mexico.

However, Mexico’s asylum system has been overwhelmed and the slow process has led many to decide it was not worth waiting and begin to travel north, either in hopes of reaching the  US-Mexico border or finding greater opportunity in wealthier northern Mexican cities.

For its part, the US, which has seen a record number of border crossings in recent months, has continued to use a Trump-era public health rule, Title 42, to turn away most asylum seekers at the US-Mexico border, citing fears of spreading COVID-19.

On Monday, the US began allowing fully vaccinated travellers to cross the US-Mexico border. Washington has said the change will not affect Title 42, but the move has nevertheless sparked hope of easier access into the country.

Meanwhile, President Joe Biden’s administration is currently challenging a court order reinstating the Trump-era “Remain in Mexico Policy”, which requires asylum seekers crossing the southern US border – often in makeshift camps – to remain in Mexico while their cases are processed. 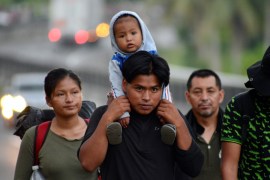 In response to court ruling, US President Joe Biden’s administration plans to restart a policy it tried to end. 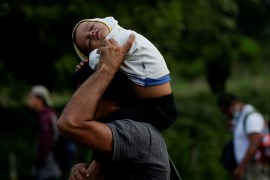 US makes another attempt to end the ‘Remain in Mexico’ programme

The Biden administration is still subject to a court decision that has ruled the programme needs to be reinstated. 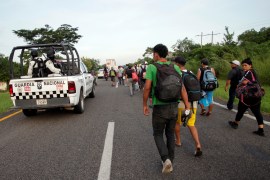