Dozens of migrants travelling north to Mexico City have clashed with Mexican National Guard officers in the southern state of Chiapas, near where a Cuban national was killed on Sunday by the militarised police force.

The group of mostly Central American women and children resumed their journey on Monday in the Pijijiapan municipality of Chiapas, after fatigue and illnesses among some members prompted a two-day break.

“There are two injured migrants, they were badly beaten. The officers tried to surround them with their shields,” Luis Garcia, who helped organise the caravan, told Reuters news agency over the phone.

“Everything was chaotic. It’s not right that the authorities keep acting this way. Despite all the repression we’re not going to stop,” Garcia said, adding that authorities had escorted away migrants in at least four buses.

The AFP news agency also reported that at least one officer was injured and 25 people were detained amid the clashes on Thursday.

The National Guard did not immediately respond to requests for comment from Reuters or AFP.

The NMI did not immediately respond to a request for comment.

The clashes occurred near where a Cuban migrant was shot dead and four others were wounded by National Guard officers early on Sunday in an area where a caravan of migrants was heading towards the United States border.

Authorities said the National Guard opened fire at a pick-up truck attempting to avoid a checkpoint, putting “at imminent risk their safety”.

US President Joe Biden, who promised to reverse some of his predecessor Donald Trump’s most hardline anti-immigration policies, has sought to stem the flow of irregular migration at the nation’s southern border.

The administration has left a contentious Trump-era public health order known as Title 42 in place, allowing US officials to immediately expel most migrants who arrive in hopes of applying for asylum in the country.

But that hasn’t stopped people from trying to reach the US. Thousands say they have been pushed to leave their countries due to gang violence, high unemployment rates, and systemic inequalities, as well as the devastation caused by recent extreme storms.

A few thousand migrants set off on foot in a caravan last month from the southern Mexican city of Tapachula, near the border with Guatemala.

They have made slow progress, trudging along highways amid brutal heat, advancing only about 150 kilometres (95 miles) in almost two weeks.

The Mexican government has tried to discourage the group, saying poor conditions are putting peoples’ lives at risk. The NMI said six cases of the tropical fever dengue was detected among members of the caravan.

Much larger caravans crossed Mexico in 2018 and 2019, but those migrants never tried to walk the whole distance. They usually caught rides aboard passing trucks.

But Mexico has told truckers not to pick up members of the caravan, saying they could face charges of migrant trafficking. The migrants are also afraid of becoming separated from the group, for fear they will be rounded up and deported.

A National Guard officer was killed by suspected traffickers in September, while a dozen members of an elite police force in the northern border state of Tamaulipas are on trial for allegedly killing 14 Guatemalan migrants and five other people, whose bodies were found shot and burned near the US border in late January.

Frustration has been growing for months among the thousands of migrants waiting in Tapachula.

The Mexican government has tried to contain migrants in the south, far from the US border, while allowing them to apply for asylum in Mexico. But the country’s asylum system has been overwhelmed and the slow process led many to decide it was not worth waiting. 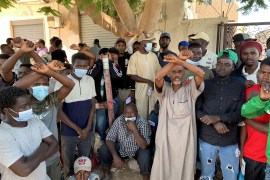 Appeals at Tripoli sit-in come as more than 5,000 people rounded up this month and put in indefinite detention. 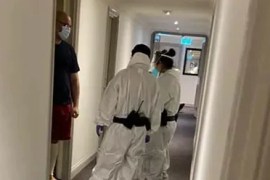 Detainees describe their dire situation inside a Melbourne hotel and express fear amid the spread of the coronavirus. 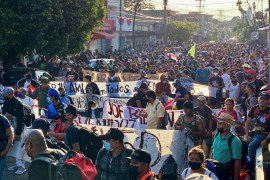 Mexico: Thousands of migrants set off from southern city

Migrants walked along a highway leading west and north towards the US border, before stopping to rest for the night. 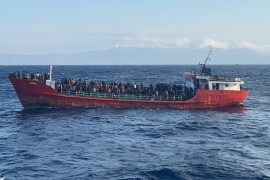 Greek coastguard says rescue operation was ‘one of the largest’ ever carried out in the Eastern Mediterranean.