More than a month after two hurricanes wreaked havoc in Honduras, hundreds of thousands of people displaced by mass flooding and mudslides are still struggling to cope, surviving with little to no outside assistance.

But residents say a strong sense of solidarity is one of the few things keeping the displaced families – now living in makeshift campsites and overcrowded communal shelters – going.

Communities banded together to get through Eta and Iota, which struck Central America in November, and now they are attempting to clean damaged homes.

A few kilometres outside the city of La Lima – one of the worst-affected areas in Honduras – 25-year-old Fredy Alexis Morataya Vasquez said he did not think he would survive the dramatic floods that almost submerged his village.

“I didn’t think we would survive, but the most beautiful experience during this was that our community supported itself – we rescued each other,” Morataya Vasquez said.

“Thank God we have warriors that saved lives. We are surviving because we are together and help each other. This moment is not for fighting each other, but to unite more.”

The storms exacerbated an existing humanitarian crisis in the region.

In April 2020, the United Nations reported that 5.2 million people were in need of humanitarian assistance in Honduras, El Salvador and Guatemala due to years of chronic and extreme violence, displacement, food insecurity and the adverse effects of climate change.

COVID-19 lockdowns have since paralysed local economies and health systems across Central America, and new caravans of migrants heading for North America are being organised on social media as many people see no other option than to flee.

The UN estimated in mid-December that in Honduras alone, more than 85,000 houses were damaged and 6,000 were completely destroyed as a result of the storms. 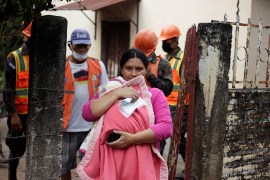 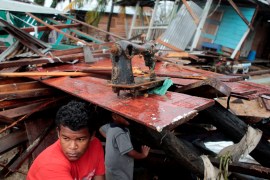 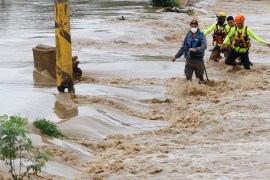 Nicaragua and Honduras bear the brunt of the hurricane’s destruction amid a record year of storms in the Atlantic.