Blinken made the announcement on Friday from the Nigerian capital of Abuja, his second stop on a three-country tour of sub-Saharan Africa that began in Nairobi, Kenya and will end in Dakar, Senegal.

“President Biden intends to host the US-Africa Leaders Summit to drive the kind of high-level diplomacy and engagement that can transform relationships and make effective cooperation possible,” Blinken said.

Blinken, who is on his first visit to sub-Saharan Africa as secretary of state and is the highest-ranking Biden administration official to visit the region, did not give a date for the summit.

However, on Friday, delivering a speech to the Economic Community of West African States (ECOWAS), Blinken vowed an overhaul of the US approach to Africa that will treat the continent as a “major geopolitical power” and that will boost development without the “strings” often attached to such deals.

“Too often, international infrastructure deals are opaque, coercive. They burden countries with unmanageable debt,” he said. “They’re environmentally destructive. They don’t always benefit the people who actually live there.”

“We will do things differently.”

While the US has increasingly focused on countering China’s engagement with the continent, Blinken did not reference the superpower, which will hold a China-Africa cooperation summit later this month in Senegal, by name.

Instead, he said Washington did not want to make African countries choose between the US and other partnerships.

“We want to give you choices,” he said.

Blinken also warned against “Democratic backsliding” across the world, saying that leaders need to “show how democracies can deliver what citizens want, quickly and effectively”.

He added that African nations are too often “treated as junior partners – or worse – rather than equal ones”.

“And we’re sensitive to centuries of colonialism, slavery, and exploitation that lead to painful legacies that endure today,” he said.

The speech comes as some observers have said Africa has lagged behind the administration’s other foreign policy priorities.

In a joint news conference with Onyeama, Blinken said the US supports Nigeria’s “engagement, leadership and strong voice”. However, he called for greater human rights accountability in the country.

Nigeria, the most populous country with the largest economy in sub-Saharan Africa, has long been plagued by rampant corruption. In 2020, security forces were accused of unleashing disproportionate and deadly violence during massive protests against police brutality.

Meanwhile, objections in the US Congress have held up the sale of 12 US Cobra attack helicopters to Nigeria amid calls to probe whether the military is doing enough to prevent civilian deaths in its two-decade-long fight with the Boko Haram group in the country’s north.

In Kenya on Wednesday, Blinken met President Uhuru Kenyatta and discussed the spiralling conflict in Ethiopia as well as the military takeover in Sudan. 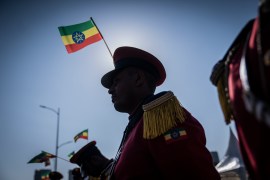 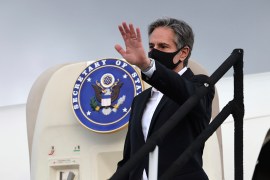 US: Blinken to make first official visit to sub-Saharan Africa

US secretary of state to visit Kenya, Nigeria and Senegal, but crises in Ethiopia, Sudan and Somalia will loom large. 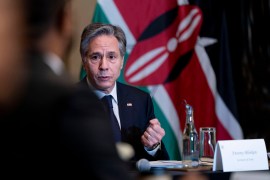