In 1999, United States conservationist Michael Fay spent 15 months walking 3,200km (2,000 miles) across the Congo Basin, documenting the region’s pristine forests and wildlife. David Quammen, a freelancer for National Geographic magazine, chronicled Fay’s journey in a series of articles and photographs, including a family of hippos wandering along a white sand beach in western Gabon.

Then-Gabonese President Omar Bongo Ondimba saw those photos and met Fay in New York. At the president’s behest, Fay returned to Gabon in August 2002, to give a presentation to the cabinet with the United Kingdom-born Lee White, who came to Central Africa in the 1980s as a researcher, and World Wildlife Fund scientist Andre Kamdem.

Their presentation convinced the president to establish a national park network in Gabon – protected areas that now span 11 percent of the country. In 2019, having been a Gabonese citizen for more than a decade, White was appointed as environment minister under President Ali Bongo Ondimba, Omar’s son.

Gabon is one of the few countries in the world that absorbs more CO2 than it emits, with a forest that spans most of the country. At COP26 in Glasgow this month, Gabon is chair of the African Group of Negotiators.

Al Jazeera spoke to White about the conference and Gabon’s green economic plan.

Al Jazeera: How does Gabon differentiate itself from other African nations in its approach to climate change?

Lee White: Gabon climatically is one of the most stable countries on the planet, certainly in Africa. Climate change is nothing new. We had 30 ice ages through the last 30 million years. When we had ice ages in Europe, we had drought in Africa.

In Central Africa, the rainforest retracted into a few small islands. Several of them were in Gabon, just because of Gabon’s geography on the coast with mountains next to it and so the humid air comes off the sea, goes up into the hills and it rains. And it’s going to happen forever like that.

President Bongo has made a commitment to maintaining Gabon’s forests. The best thing we can do for global climate is to maintain our rainforest – it’s 88 percent of our country, so we have developed an economic model that will allow us to develop the country whilst maintaining the forest.

Al Jazeera: Given Gabon’s role at COP26, how do you hope to unify African nations to form a set of demands?

White: Chairing the African negotiators is quite a detail-focused task. It’s really about coming up with a common position that protects the Paris Agreement, which we’re now adding the small print to.

It’s getting all the African countries to focus on the negotiating text but it’s also trying to push the urgency of the need for this global solution to help Africa.

Al Jazeera: Do you see COP26 as a “make-or-break” climate conference and the last chance for us to take meaningful action?

White: It’s always make-or-break. Copenhagen was make-or-break. Paris was make-or-break, it’s a process. The reality is there’s not much time left to make changes. Every year we lose makes things worse, and every Intergovernmental Panel on Climate Change (IPCC) report we see seems to shorten the fuse by 10 years.

The latest IPCC report brought all of the bad news 10 years closer – we’re going to go beyond 1.5 degrees Celcius (2.7 degrees Fahrenheit) by 2030 instead of 2040. We’re getting to the point where we don’t have enough time to make the changes we need to make.

Every COP is critical because it’s at these conferences that we take the big strides forward in terms of global engagement on climate change.

With this COP, it’s been very strange because we’ve not had the negotiating time in the run-up to it because of COVID-19. In Paris, we had three or four one- to two-week negotiating sessions of the text before – and we’ve not had that with Glasgow. It’s going to be a challenge, but you have to remain positive.

Al Jazeera: Gabon plans to put $5bn of carbon credits on the market in the coming weeks. Why is Gabon looking to monetise its carbon sequestration?

White: It’s the need for sustainable investment in these forests so that the forests create jobs and livelihoods for the Gabonese people. The possibility of using this net absorption as a very simple matrix of your contributions to fighting climate change could potentially fund countries like the Democratic Republic of the Congo to shift their path [towards climate change].

In Gabon, we can’t just stop using the forest, but I don’t think we need to. We can continue to do forestry, create jobs and maintain that carbon stock as high as it is, but it costs money and investment. So, there are costs to this and if carbon can supplement what we’re already doing, it could potentially make a big difference. 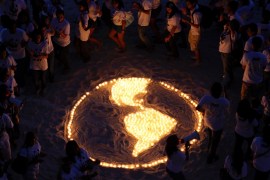 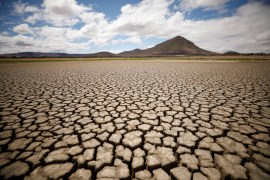 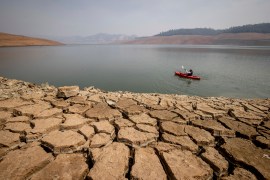 Antonio Guterres says he is ‘very concerned’ upcoming COP26 in Glasgow will fail.