France’s ambassador was ordered out of Belarus during the weekend, marking the latest escalation in a simmering diplomatic crisis between Minsk and the European Union.

In a communique issued on Monday, France’s foreign minister said that Ambassador Nicolas de Lacoste’s departure on Sunday was due to the “unilateral decision” of Belarusian authorities.

Local media said Minsk’s move to kick the 57-year-old out was linked to fallout over the non-recognition by France, and other EU countries, of longtime President Alexander Lukashenko’s re-election in August 2020.

The Belarusian Ministry of Foreign Affairs confirmed that the departure was connected with de Lacoste’s unwillingness to present his credentials to Lukashenko.

“The head of the French diplomatic mission did not express readiness to complete the procedure for assuming office as Ambassador Extraordinary and Plenipotentiary to the Republic of Belarus, which is stipulated by international law and generally recognised practice,” said Anatoly Glaz, press secretary of the Belarusian Foreign Ministry.

Minsk said it was recalling Belarus’ ambassador to France, Igor Fisenko, for consultations over the developments.

The French foreign ministry explained on Monday that de Lacoste did not present his credentials to the 67-year-old leader because it was “in line with the common European position of not recognising the legitimacy of the outcome of the August 2020 presidential election”.

The French ambassador arrived in Minsk after the controversial poll, which sparked historic, mass protests against Lukashenko’s rule in the ex-Soviet country.

Authorities responded to the unrest by detaining thousands of protesters and shutting down dozens of independent media outlets and NGOs.

In December, de Lacoste handed copies of his credentials to the Belarusian foreign minister, but did not want to meet with Lukashenko.

He frequently met representatives of civil society and politicians in Belarus while serving in his post.

Among the latest meetings were negotiations in Minsk with activists of the opposition “Tell the Truth” movement.

Minsk has also cut ties with several other Western envoys in recent months.

In March, it expelled the entire staff of Latvia’s embassy, including the ambassador, after Latvian authorities used a Belarusian opposition flag at an ice hockey championship.

And in August, Minsk revoked the consent for the appointment of the US ambassador, career diplomat Julie Fisher, who in December 2020 had been confirmed as the first envoy from Washington to Belarus since 2008.

The EU and US have meanwhile imposed waves of sanctions on Lukashenko’s government over its post-election crackdown on dissent.

But Lukashenko, who has accused Western governments of having instigated the protests against him in the hope of fomenting a revolution, has so far withstood the penalties with the backing of ally and creditor Russia.

All of Belarus’s top opposition leaders are now either in prison or have fled the country. 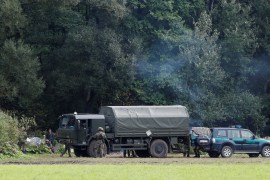 Documents found on the body indicated he was a 24-year-old Syrian man, the latest in string of fatalities at the border. 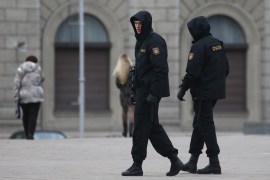 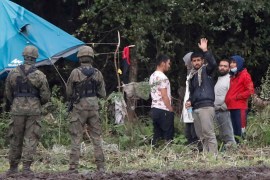