The country’s central election commission announced on Monday that all the ballots had been counted and Lukashenko took 80.23 percent of the votes, while his main opposition challenger Svetlana Tikhanovskaya had 9.9 percent.

The announcement came after police broke up crowds of protesters with stun grenades and rubber bullets in Minsk and other cities on Sunday evening after an exit poll showed Lukashenko winning an overwhelming victory.

Tikhanovskaya, a 37-year-old stay-at-home mother and political novice, galvanised the opposition during the election campaign, attracting tens of thousands of supporters to the ex-Soviet country’s biggest demonstrations in years.

A rights group reported that at least one person was killed after being knocked over by a police van and dozens were injured in the clashes that began on Sunday after polling stations closed. More than 200 people were also reportedly detained.

#Belarus It is hard to imagine how the authorities will explain these images,and I am not posting most sensitive ones. These were peaceful protesters,mostly young,really young people. At least one person died after a police van intentionally hit him. The authorities are denying pic.twitter.com/6OfypgvQeJ

A former Soviet collective farm manager, Lukashenko has ruled the country since 1994, but faces the biggest challenge in years to keep his grip on power with some voters believing strongly that it is time he stood down.

He has cast himself as a guarantor of stability, but is battling a wave of anger over his handling of the COVID-19 pandemic, the economy, and his human rights record.

Tikhanovskaya entered the race after her husband, an anti-government blogger who intended to run, was jailed. Her rallies have drawn some of the biggest crowds since the fall of the Soviet Union in 1991.

Foreign observers have not judged an election to be free and fair in Belarus since 1995.

A severe crackdown on protests could hurt Lukashenko’s attempts to mend fences with the West amid fraying ties with traditional ally Russia, which has tried to press Belarus into a closer economic and political union.

Human rights groups say more than 1,300 people were detained in the crackdown ahead of the election, including independent election observers and members of Tikhanovskaya’s campaign team. 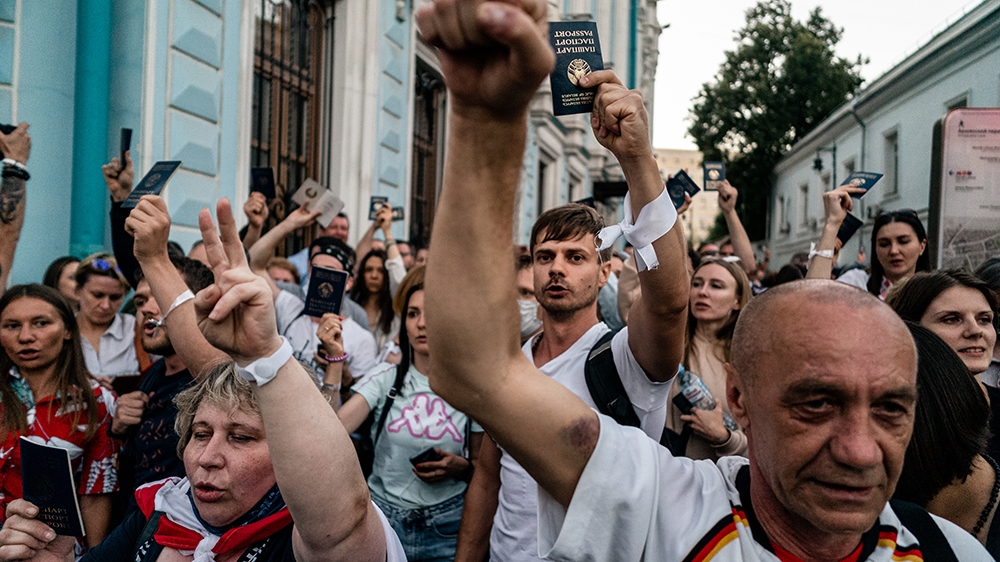 Late on Sunday, the atmosphere in the city was tense as riot police faced off with opposition protesters, beating some with truncheons and using flash-bang grenades to try to disperse them.

Al Jazeera’s Step Vaessen, reporting from Minsk, said the capital was “a city filled with anger and frustration” and described “hectic scenes” that “Minsk hasn’t witnessed before”.

“The streets and squares are full of people who are all very angry, calling the election a huge fraud,” added Vaessen.

“They’re very defiant but also very scared because riot police are out in force. They are detaining people right in front of us, so people are spreading around trying to get away from police.”

Police presence in Minsk was heavy throughout the day and, in the evening, police set up checkpoints on the city’s perimeter to check residence permits, apparently worried that protesters would come from other cities.