The Biden administration is planning to reinstate a controversial Trump-era immigration policy along its southern border that forces asylum seekers to wait in Mexico for their hearings in US immigration court.

But the plan to restore the “Remain in Mexico” programme, formally known as the Migrant Protection Protocols (MPP), next month requires the approval and cooperation of the Mexican government, which has raised concerns.

The Justice Department said in a court filing that US officials are working to address those concerns.

The announcement comes after the US said it would reopen its land borders with Canada and Mexico to non-essential travellers vaccinated against COVID-19 in early November – ending pandemic travel restrictions put in place in March 2020.

DHS issued a memorandum in June 2021 that terminated MPP. However, a Texas district court vacated the termination memo and issued an injunction that requires DHS to work in good faith to re-start MPP. DHS appealed the injunction.

About 70,000 asylum seekers have been subject to the “Remain in Mexico” policy, which President Donald Trump introduced in January 2019.

Trump, who during his time in office advanced hardline, anti-immigration policies, argued that many asylum claims were fraudulent and applicants allowed into the US might end up staying illegally if they skipped court hearings.

Biden ended the MPP policy soon after taking office as part of a broader pledge to take a more humane approach to immigration. But a federal court deemed the termination of the programme unjustified, siding with two states who sued the administration.

US District Judge Matthew Kacsmaryk in Amarillo, Texas, a Trump appointee, left open the possibility that the administration could try again to end the policy, however, and officials say they will release a plan soon that they hope will survive legal scrutiny.

In the meantime though, the Biden administration has said it will comply with Kacsmaryk’s ruling “in good faith” while continuing its appeal in the case – meaning that the policy will be restarted.

Immigration advocates have said the programme exposed migrants to violence and kidnappings in dangerous Mexican border cities controlled by drug cartels. Many people camped out for months or years in shelters, makeshift camps or on the street, waiting for US asylum hearings.

The last thing the Biden administration should do is restart MPP. It should issue the new MPP termination memo & end this horrific program.

Human Rights First, a Washington, DC-based rights group, says at least 1,544 cases of murder, rape, torture, kidnapping and other assaults have been reported against asylum seekers waiting in Mexico as of February 2021.

“Restarting any version of the Trump administration’s notorious Remain in Mexico policy will lead to immense human suffering,” Eleanor Acer, the organisation’s senior director of refugee protection, said in a statement. “Trump 2.0 policies at the border are a recipe for continued cruelty, disorder, and violations of refugee law.”

The possible reinstatement of MPP – even on a short-term basis – would add to an already problematic situation along the US-Mexico border, where crossings into the US have reached a 20-year high in recent months. It is also likely to pile on more criticism from rights organisations.

Last month the Biden administration came under heavy criticism for expelling more than 7,000 Haitian asylum seekers back to their crisis-stricken country.

At the same time, Biden has left in place “Title 42“, a public health policy that Trump implemented early in the pandemic that allows for most asylum seekers crossing into the US to be rapidly expelled, without the chance to apply for protection.

As a condition to reinstate the programme, Mexico wants cases to conclude within six months and ensure that asylum seekers have timely and accurate information about hearing dates and times, as well as better access to legal counsel.

Mexico also wants exemptions for “particularly vulnerable populations” and better coordination on locations and times of day that asylum seekers are returned to Mexico.

US officials said the renewed MPP policy will be applied to people who do not qualify for Title 42 expulsions.

According to the court filing, the administration plans to rebuild tent courts in the Texas border cities of Laredo and Brownsville, which will cost $14.1m to erect and $10.5m per month to operate. It is also working to ensure there is capacity in a system backlogged with 1.4 million cases. 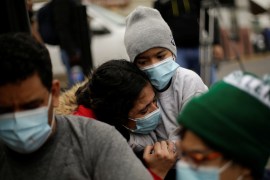 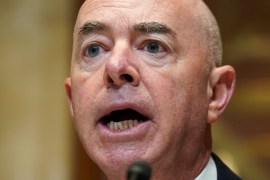 According to a memo, more than 11,000 migrants have been allowed to enter the US to pursue their asylum claims. 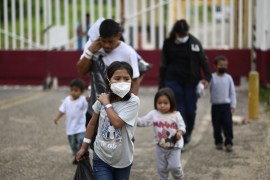 Biden administration says its regrets the court’s decision but will will comply with the order ‘in good faith’.