Hundreds of Palestinians protested Tuesday in the occupied West Bank and the Gaza Strip, denouncing the Emirati and Bahraini normalisation agreements with Israel as rockets were fired into the country.

The deals, brokered by the United States, were signed on Tuesday at the White House, where Israeli Prime Minister Benjamin Netanyahu met Bahraini and Emirati officials.

Clutching Palestinian flags and wearing face masks for protection against the coronavirus, demonstrators rallied in the West Bank cities of Nablus and Hebron and in Gaza. Dozens also took part in a demonstration in Ramallah, home of the Palestinian Authority (PA).

Banners were displayed reading “Treason”, “No to normalisation with the occupier”, and “The agreements of shame”.

Palestinian demonstrator Emad Essa from Gaza said if people walk through the coastal enclave “you’ll see hundreds of Gazan youth who have lost their legs and got crippled for life for just for merely protesting against the Israeli blockade”.

“And in the West Bank and Jerusalem, the Israeli bulldozers continue to demolish Palestinian homes and ethnically cleanse the Palestinians out of their villages and cities on a daily basis,” Essa told Al Jazeera.

“That’s just the tip of the iceberg of Israeli crimes against the Palestinians, and the UAE and Bahrain somehow chose to reward Israel for these crimes by making agreements with it. The deals are stains of shame on the forehead of those leaders who sold the Palestinian cause for a very cheap price.”

The ceremony in Washington, DC marked the first such significant agreement between Arab countries and Israel in a quarter-century.

PA President Mahmoud Abbas said that only Israel’s withdrawal from occupied territories can bring peace to the Middle East.

“Peace, security, and stability will not be achieved in the region until the Israeli occupation ends,” he said in a statement after the signing ceremony, condemned by Palestinians as a “betrayal” of their cause.

The Palestinian Unified National Command of Popular Resistance called for protests to reject the normalisation deals. In a statement, it called for Friday to be considered “a day of mourning in which black flags are raised in all squares, buildings and homes”.

Pro-Palestine activists worldwide call today, 15 Sep., the day when UAE, Bahrain, and the Israeli occupation will sign the peace deal, the #Black_Day #اليوم_الأسود, calling for supporters of the Palestinian cause to condemn the deal on social media and through demonstrations. pic.twitter.com/pa14vsn79Y

Sami Abu Zuhri, a Hamas spokesman, said the Bahrain and UAE agreements would not bring Israel peace in the region. “Peoples of the region will continue to deal with this occupation as their true enemy,” he said.

In Ramallah, the de facto capital of the PA, there was a small protest at which 200 people gathered in a central square.

“At a time where companies in the West are boycotting Israel, two Arab countries are about to make trade agreements with it.”

The secretary of the central committee of the Fatah Party, Jibril Rajoub, told reporters “what is happening today in Washington is a form of collapse of the official Arab order”.

Translation: On this black day, the traitors’ signatures on the agreements of shame and humiliation is not worth the ink they wrote in. Palestine is the cause of the free people and will remain the compass of revolutionaries.

Two rockets were fired from the Gaza Strip into Israel at the same time the ceremony was being held. Sirens sounded in the cities of Ashkelon and Ashdod just north of the Gaza Strip.

Osama Hasan, who took part in the protests in Hebron, called the normalisation agreement a “stab in the back of the Palestinians”.

“Despite the heartbreak over it, we have always known the road to freedom is long and hard, and needs patience and sacrifice,” he said. “We will keep walking that road and keep fighting until we earn our freedom and establish the Palestinian state.

“The Palestinian people are here to stay … Our resolve, resilience, and steadfastness will not be affected by those who let us down and abandoned us.”

Demonstrator Ibrahim Ouda told Al Jazeera that the Palestinian people are uniting against “all the conspiracies that are meant to undermine Palestinians’ rights”.

“If Israel wants peace, then the only way real peace can happen in the region is through giving us our freedom and ending the occupation,” Ouda said.

Meanwhile, dozens of Bahrainis took to the streets to protest the deal the kingdom signed with Israel. There were at least two small demonstrations in northern areas of Bahrain, where protesters chanted anti-Israel slogans and stepped on Israeli flags amid a heavy police presence.

The Bahraini opposition Al-Wefaq National Islamic Society wrote on Twitter: “At the moment of treason and when they sign on the conspiracy against al-Quds [Jerusalem] and Palestine, we shout God is Great, God is Great.”

Ali Adam in Gaza City contributed to this report 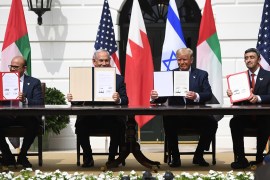 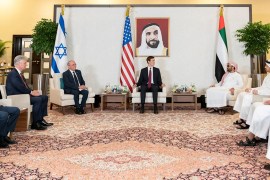 Israel ties that bind: What is the US giving Gulf Arab states?