At least three police officers from New York fell ill and were hospitalised after dining at a popular restaurant chain in Lower Manhattan, according to a news report.

The three officers reportedly found substance, “believed to be some sort of cleaning solution or disinfectant” mixed in their milkshake drink, NBC News reported.

“When New York City police officers cannot even take (a) meal without coming under attack, it is clear the environment in which we work has deteriorated to a critical level,” a statement from a police union said.

An Aboriginal man, whose violent arrest by South Australian Police was caught on video, has been released from custody with all charges dropped, reports said, as police launched an investigation on the incident.

Henry Noel, 28, has been released from the Port Adelaide Police Station after a social media video appeared to show an officer striking him several times during an arrest on Monday night.

A person familiar with the case told NITV that Noel had “really bad injuries to his face, his arms, his legs”.

A senior administration official says an executive order that President Donald Trump is expected to sign on Tuesday would set up a database for tracking police officers who have complaints about excessive use of force in their records.

The official says the administration wants to keep such officers from moving between police departments.

The president’s executive order comes as lawmakers work quickly in response to outrage over the death of George Floyd. Senate Republicans are also poised to unveil an extensive package of policing changes.

New York City’s police department is disbanding the type of plain-clothes anti-crime units that were involved in the 2014 death of Eric Garner and have long been criticised for aggressive tactics, Commissioner Dermot Shea announced.

The units, which focused primarily on seizing illegal guns, were responsible for a disproportionate number of shootings and complaints, Shea told reporters after meeting with top deputies to discuss the move. About 600 officers working in the unit will be given new assignments.

Garner died when an officer enforcing a ban on the sale of loose cigarettes used a chokehold to wrestle him to the ground.

The 9-0 vote came amid frustration with the Seattle Police Department, which used tear gas to disperse protesters in the city’s densest neighbourhood, Capitol Hill, just days after Mayor Jenny Durkan and Chief Carmen Best promised not to.

A federal judge on Friday issued a temporary order banning Seattle police from using tear gas, pepper spray, foam-tipped projectiles or other force against protesters, finding that the department had used less-lethal weapons “disproportionately and without provocation”.

Local authorities have said there is no evidence of foul play in the deaths of Robert Fuller in Palmdale and Malcolm Harsch in Victorville and early indications point to suicide in both cases, but sheriffs have pledged to continue the investigations.

The announcement follows protests prompted by the initial determination of suicide as the likely cause of death for Fuller.

People who participated in a town hall hosted by Los Angeles County Sheriff Alex Villanueva on Monday voiced concerns that Fuller and Harsch may have been lynched and urged investigators to look into the possibility that hate crimes were committed.

Pleading through tears Monday, the family of a Black man killed by Atlanta police outside a drive-through demanded changes in the criminal justice system.

An autopsy found that 27-year-old Rayshard Brooks was shot twice in the back late Friday by a white officer who was trying to arrest him at a fast-food restaurant for being intoxicated behind the wheel of his car. Brooks tried to flee after wrestling with the officers and grabbing a stun gun from one of them.

“Not only are we hurt, we are angry,” said Chassidy Evans, Brooks’ niece. “When does it stop? We’re not only pleading for justice. We’re pleading for change.”

A second man has been charged with murder in the fatal shooting of retired St Louis police Captain David Dorn during a pawn shop break-in that followed a night of violent protests on June 2.

Activists created an online petition demanding justice for Rayshard Brooks. The petition has gathered over 52,000 signatures.

Bottoms said that, when she saw the death of Rayshard Brooks, “It was clear that we do not have another day, another minute, another hour, to waste.”

She said the police must find a better way to handle confrontations, and that she is heartbroken over Brooks’ death.

The order mandates “every state, county, and local law enforcement agency in New Jersey” to annually publish a list of officers “who were fired, demoted, or suspended for more than five days due to a disciplinary violation, with the first list to be published no later than December 31, 2020”, according to a release issued by his office.

The order is meant to build public trust, according to Colonel Patrick J Callahan, superintendent of the New Jersey State Police. “By releasing the names of State Troopers who committed serious disciplinary violations, we are continuing the long, hard work of earning and maintaining the trust of the communities we serve”, Callahan said.

The “March on Georgia”, organised by the state’s NAACP, reached the Georgie State Capitol building in Atlanta on Monday. Demonstrators delivered a list of demands to the state legislature.

These demands included ending Citizen’s Arrest and Stand Your Ground laws, among other measures regarding voter disenfranchisement, which are “necessary to end systemic racism in the criminal justice system and voter suppression in Georgia”, the organisation said in a release.

The march came as Atlanta Mayor Keisha Bottoms she would issue a series of administrative orders to accelerate a review of policing in the wake of the police shooting of Rayshard Brooks.

A large “Black Lives Matter” banner draped on the outside of the US embassy in Seoul was removed on Monday after President Donald Trump expressed his displeasure about it, two people familiar with the matter told the Reuters News Agency.

The banner – seen as a rare show of open support for the Black Lives Matter movement by a Trump appointee, Ambassador Harry Harris – had hung on the building on Saturday as the embassy tweeted in support of the anti-racism campaign across the US and worldwide in response to the killing of Floyd.

Bloomberg News reported earlier that both Trump and US Secretary of State Mike Pompeo were displeased about the banner.

The U.S. Embassy stands in solidarity with fellow Americans grieving and peacefully protesting to demand positive change. Our #BlackLivesMatter banner shows our support for the fight against racial injustice and police brutality as we strive to be a more inclusive & just society. pic.twitter.com/Y4Thr2MRdw

During a news conference on the killing of Rayshard Brooks, his family called for “drastic change” in the Atlanta Police Department.

“The trust that we have with the police force is broken,” Tiara Brooks, Rayshard’s cousin, said at the news conference.

“True justice will never prevail” because Rayshard will not come back, Tiara said, calling for demonstrations to continue in order to make sure another case like his will not occur.

Lawyer L Chris Stewart, who is representing the Brooks family, questioned whether there was an acceptable definition of justice. He presented what he said were photos of vehicles that had been shot by police during the fatal incident. “It should never have happened,” Stewart said.

Rayshard’s widow, Tomika Miller, said she wanted to thank everyone for their protests and support.

Miller called on protests to remain peaceful, as the family wants to “keep his name positive and great”.

The news conference ended suddenly as one of Brooks’s cousins broke down at the mention of his funeral. The man departed in tears, saying: “I want y’all to know, you took my cousin from me … you took the wrong person,” presumably speaking to the Atlanta police.

The US Supreme Court declined to hear a number of cases involving a legal defence called qualified immunity that can be used to shield government officials from lawsuits, including police officers accused of excessive force.

The justices are rejecting appeals in cases that had been pending before the court for months, including a dispute over whether officers in Tennessee can be sued for using a dog on a man who says he had surrendered.

The decision to reject the cases comes as a national spotlight is once again trained on the police’s use of force after the death of George Floyd in Minneapolis. Democrats and Republicans in Washington have been pulling together their own versions of police reform legislation.

12:45 – Alabama to place removed Confederate statue in a museum

A Confederate statue removed from Alabama’s port city earlier this month has been relocated to the History Museum of Mobile, Mayor Sandy Stimpson said on Sunday on Twitter.

The statue of Admiral Raphael Semmes stood near the Mobile waterfront for 120 years until June 5; the museum “will develop a plan to protect, preserve and display” it and “place it into the appropriate historic context”.

Another Confederate monument has been taken down:
Mobile, Alabama removed the statue of a Confederate admiral from its pedestal last night. https://t.co/Au0eaIEu8W pic.twitter.com/NgDaoMNb84

Attorney General Steve Marshall had sent a letter to the mayor after the statue’s removal, saying the city could be subject to a $25,000 fine for permanently moving the statue, an action that would violate a state law protecting monuments more than 40 years old, AL.com reported.

The statue was dedicated in 1900, the year before Alabama ratified a Constitution that established white supremacy in the state by essentially disenfranchising Black people and poor white people.

The instincts of the Black Lives Matter protester who emerged from chaotic scenes in London carrying an injured white man, suspected of being a far-right demonstrator, during scuffles with counterprotesters on Saturday represented the best of us, Prime Minister Boris Johnson’s spokesman said.

Patrick Hutchinson has been hailed a hero for carrying the injured man over his shoulder, an image that has gone viral on social media after it was taken by a Reuters photographer.

“Patrick Hutchinson’s instincts at that moment represent the best of us,” the spokesman told reporters.

As police confront protesters across the US, they are turning to rubber bullets, pepper spray, tear gas and other weapons meant to minimise deaths.

But some are using a weapon that has the potential to kill: the Taser. When those encounters have turned fatal, Black people make up a disproportionate share of those who die, according to a Reuters analysis.

Reuters documented 1,081 cases through the end of 2018 in which people died after being shocked with a Taser by police. At least 32 percent of those who died were Black, while at least 29 percent were white. African Americans make up 14 percent of the US population, and non-Hispanic whites 60 percent

The UN’s top human rights body will hold an urgent debate on allegations of “systemic racism, police brutality and violence against peaceful protests” in the US on Wednesday, a statement said.

The decision by the UN Human Rights Council followed a request last week by Burkina Faso on behalf of African countries, it said in a statement on Monday.

“The death of George Floyd is unfortunately not an isolated incident,” the letter said.

Catch up on previous updates here. 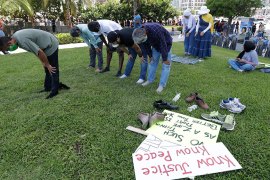 In street protests, statements, sermons and webinars, US Muslims have rallied against racism and discussed reforms. 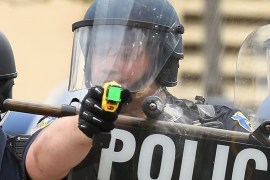 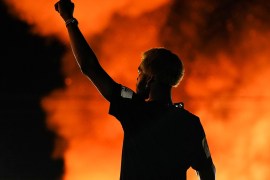 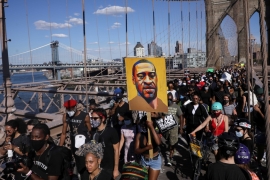 If Black Americans were to seek asylum, they could qualify

I have evaluated countless refugee cases. The oppression Black Americans face in the US would qualify as persecution.