From Mecca and Jerusalem to London and New York, Muslim scholars across the world have called on people to “stay home and stay safe” this Ramadan, keeping mosques closed and congregational prayers on hold to curb the spread of the coronavirus.

Muslims observe Ramadan by fasting during daylight hours, but also essential to this holy month are gatherings to share meals and take part in communal prayers, known as tarawih, or night prayers.

“Congregational prayers are a big part of the lives of many Muslims generally, but even more so during Ramadan with tarawih prayers held daily at many mosques across the country,” said Harun Khan, secretary-general of the Muslim Council of Britain (MCB).

But because of the pandemic, mosques worldwide have for weeks taken a series of measures to curb its spread by closing their doors and banning congregations for Friday sermons and the five daily prayers.

As the global death toll from COVID-19 exceeded 170,000 and infections reached 2.5 million cases just days before the start of the holy month, Muslim scholars have reiterated the need to prioritise safety and protection over the need for spiritual and community connection, by avoiding public congregational prayers during Ramadan this year.

The decision was “in line with legal fatwas [Islamic rulings] and medical advice”, Jerusalem’s Islamic Waqf, the Jordan-appointed council that oversees the site, said in a statement.

The announcements reflected the general consensus among Muslim scholars and authorities across the world on guidelines they agreed to follow, according to Amanullah De Sondy, a senior lecturer in contemporary Islam at University College of Cork.

“The general consensus [among Muslim authorities] is that prayer should be done at home,” De Sondy told Al Jazeera, adding such a decision was evident from when Friday prayers were stopped weeks ago.

Explaining that the Islamic tradition has always put “the sacredness of life” ahead of other considerations, maintaining people’s safety amid the coronavirus pandemic has been used as “the key argument” in taking this decision, said De Sondy.

Most mosques – whether in the Middle East, Asia, Africa, Europe or the Americas – have banned congregations on Friday and for the five daily prayers for weeks, using their speakers and the call to prayer to tell people to pray at home instead.

Summing it up, Andrew Booso, an advisory board member at the UK-based Salam Institute, said “scholarly authorities … seem to have unanimously concurred on the continuing practice of tarawih prayers, albeit as a private practice at home, and not in mosques”.

Before the start of the holy month, Iran’s Supreme Leader Ayatollah Ali Khamenei made the same call in a televised speech: “In the absence of public gatherings during Ramadan, such as prayers … we should not neglect worship.

“We need to create humility and supplication in our families and in our rooms.”

Since praying tarawih at home might be a new experience for many Muslims, several scholars have issued guides on how to carry out the night ritual.

Others, including Akram Nadawi, an internationally renowned Muslim scholar and dean of Cambridge Islamic College (CIC), issued a statement to reassure people who might be worried that praying tarawih from home would not be the same.

“A congregational prayer is valid if there are two or more … doing the prayer in the same space,” he wrote in a post on his Facebook page.

“Your praying at home is always valid and doing so is acceptable when compelling circumstances make attendance at a place of congregation impractical or [as in this time of pandemic] harmful to yourself or others.”

Despite this, there are exceptions to the rule, notably among Pakistani religious scholars who agreed with President Ariful Rahman Alvi on a 20-point action plan – including no carpets, handshakes and a limited number of worshippers – to allow for congregational prayers at mosques while adhering to certain requirements.

Speaking at a news conference in Islamabad, Alvi said government and ulema, or scholarly, recommendations were collected before taking the decision. 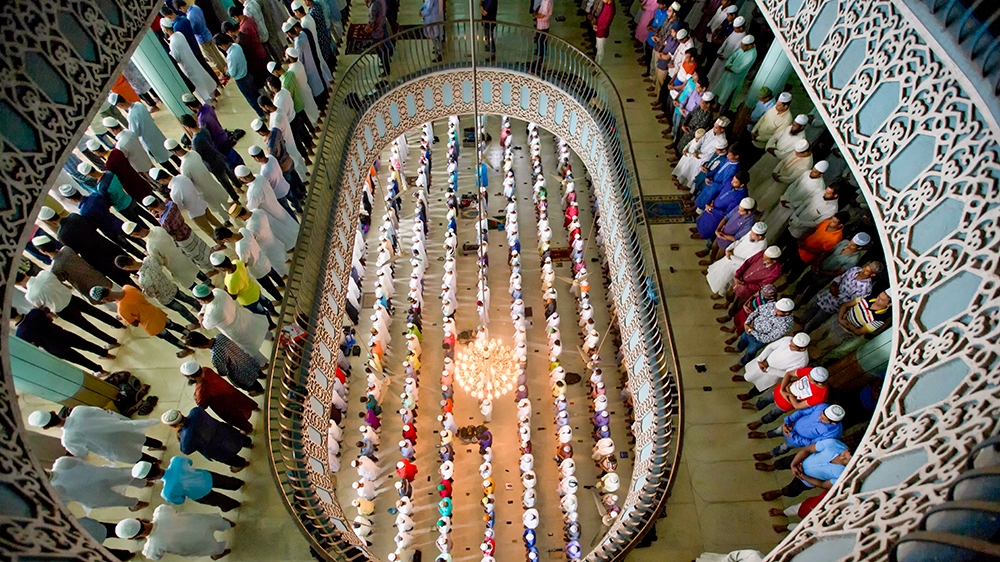 For several weeks since the start of the pandemic, many mosques have kept their communities engaged despite closing their doors through the use of livestreams to broadcast Friday sermons and weekly lectures and classes.

While many mosques will continue to do so during Ramadan, most agreed that virtual tarawih prayers would not be held.

“However, given that almost all scholars agree congregational prayers cannot be held via the internet, Muslims who wish to pray in congregation, will be doing so in their own homes with those they live with, being led by one of the family members,” he added.

According to Mansour Ali, a lecturer in Islamic studies at the University of Cardiff, while holding tarawih prayers online can allow people to “feel part of a spiritual community during Ramadan”, the majority of scholars “deny the validity of any form of virtual congregational prayers”, he told Al Jazeera.

Referring to a list of reasons behind the opinion, Ali, who published a paper on the issue, said congregational prayers need to be held in the same physical space as the imam, or prayer leader.

Nadawi agreed, adding worshippers should be able to see and hear the imam and follow his movements from within the same space.

Still, a few mosques including the ones in the US, Ireland and South Africa, announced that tarawih prayers will be livestreamed online for members of their communities to follow.

Stating that the permissibility of the matter involved a difference of opinion, the Islamic Centre of Ireland (ICI) issued a fatwa (legal ruling) in favour of holding online congregational tarawih and Friday prayers as long as the current situation remained in place.

“It [the fatwa] is only valid during the current pandemic in which mosques are closed and shall be immediately invalid once the mosques are open,” the ICC said on its website.

While reflecting a minority opinion, the fatwa reflects the centrality of communal prayers for Muslims, especially during the holy month.

“The debate on whether Friday prayers can be called juma prayers or not to online tarawih are fascinating,” said De Sondy.

“They show that Muslims are finding ways to live out faith in any situation,” he told Al Jazeera. “These are unprecedented times.”