As Italy remains placed under quarantine in an extraordinary move to prevent the spread of coronavirus, the country’s newspapers marked Tuesday with a mix of worry and hope about the unprecedented curbs.

With 9,172 confirmed cases and 463 deaths, Italy is facing the biggest outbreak of the virus outside China, prompting Prime Minister Giuseppe Conte to extend the quarantine measures first imposed in the north to the entire country.

From stocks in Milan collapsing by more than 11 percent to detainees on rooftops of their jails protesting against their living conditions – the tough measures have prompted the Italian media to both praise the government, as well as condemn it.

Here is a quick view of the front pages of five major Italian newspapers published on Tuesday.

A dramatic picture depicting an exhausted nurse in full gear sleeping over her desk dominated La Repubblica’s front page, with the headline, “Everybody at home”, splashed across it. 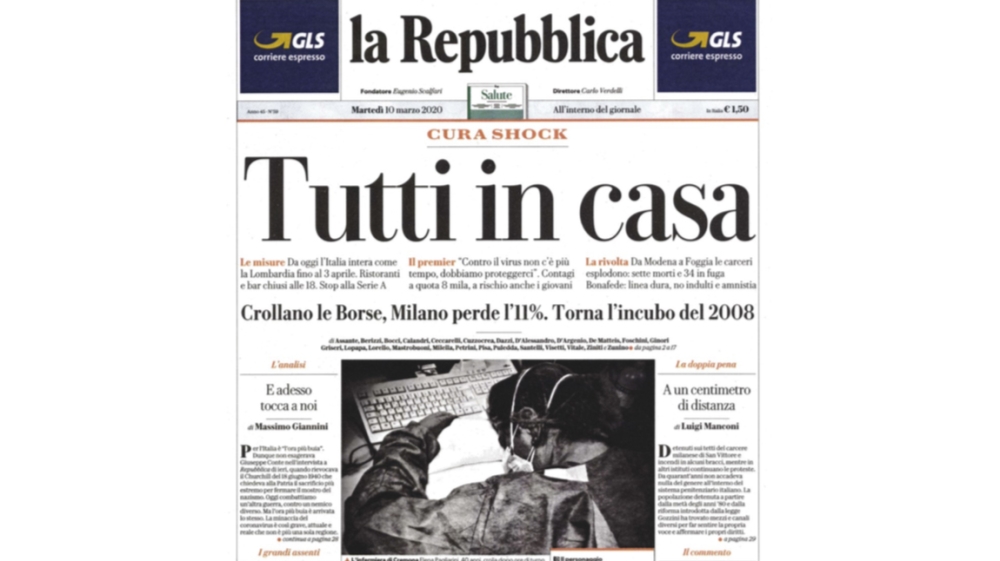 The lockdown in Italy is an attempt to contain the virus, which has overwhelmed its healthcare system.

Doctors and nurses have been working around the clock and health authorities are scrambling to add new beds for the severely ill people.

Most of the country’s 150 hospitals are now dedicated to curing people affected by coronavirus.

“Now, all of Italy is closed,” said Corriere della Serra, the most-selling Italian newspaper. “Who would have known how to locate Wuhan on the map?” said its editorial.

A front-page article in the newspaper discussed the lockdown in China’s Wuhan city as a winning model despite being based in an authoritarian country. The Chinese town in Hubei province is the epicentre of the coronavirus outbreak.

China was the first country to adopt drastic measures over coronavirus by sealing off 56 million people living in the province.

The Corriere della Serra article called on the European Union’s central bank to give Italy full support in fighting the virus and promising that its economy “would not die on the operating table”.

La Stampa, a newspaper based in the northern Italian town of Turin, split its front page between two photos depicting the two facets of the crisis.

A photo of a shocked stock trader witnessing the sharp fall in the market was placed next to one of a group of detainees protesting on top of a prison.

Riots broke out in at least 27 prisons across Italy, killing 12 people so far. The violence erupted after prison authorities implemented restrictions, including a ban on family visits and leave permits. 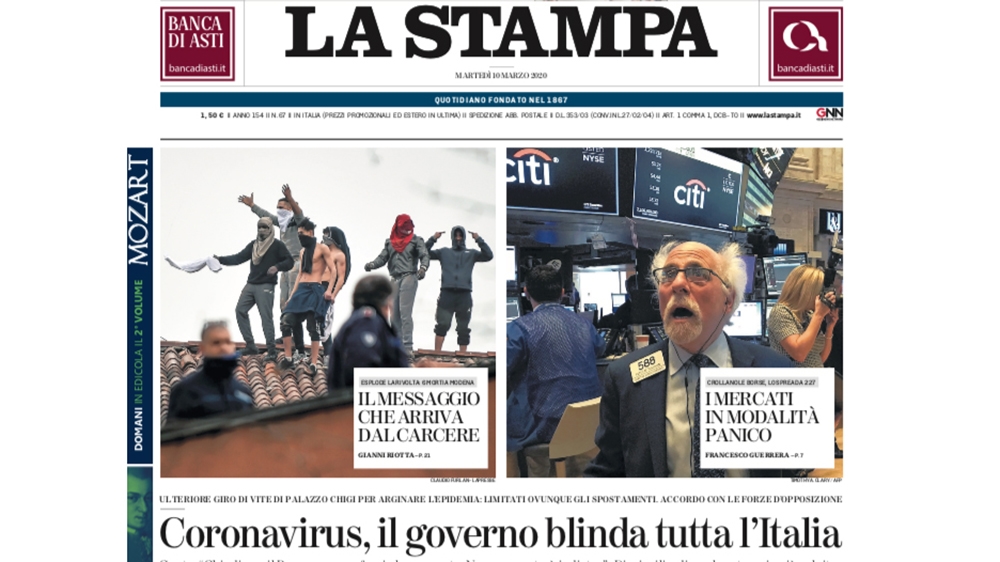 Newspaper Il Fatto Quotidiano reminded its readers of “The great escape: 20 thousand in 2 days,” referring to the panic among people who rushed to train stations following the government’s lockdown order on Sunday.

“We are suspended between a national tragedy and a surreal farce,” said the director of the newspaper in his editorial piece.

“Block everything [but for real],” urged Il Messagero, outraged by the “flaws” in the government decree after it allowed people to move for “necessities”.

“Who is going to define such a blurred concept?” asked its editorial piece, outlining how the decree’s concessions would only facilitate the spread of the virus across affected areas. 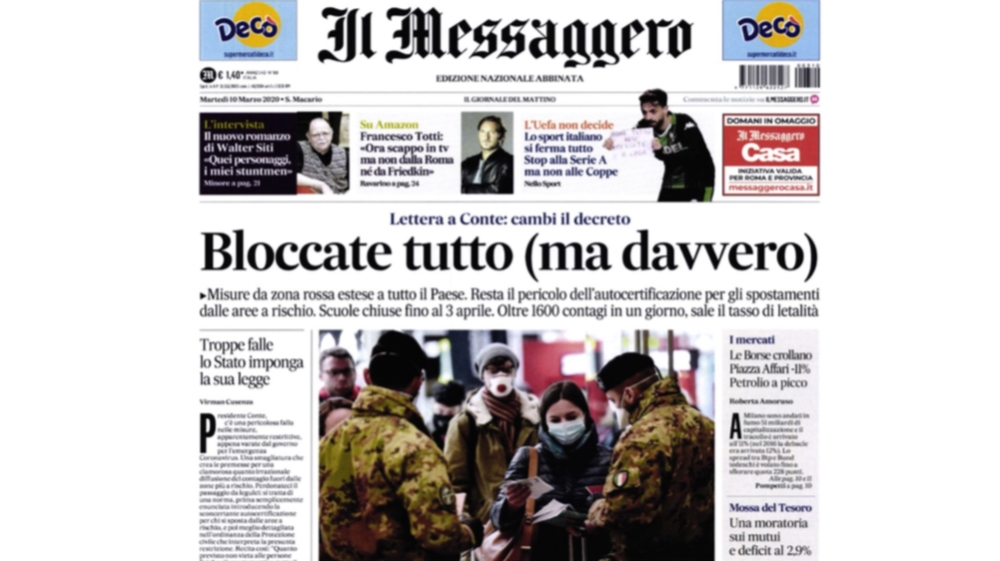 For Sole 24 Ore daily, it was all about the economy. “Virus effect and oil sinking. Bourses knockout. All of Italy [is an] orange zone and the deficit [is up] up to 2.9 percent,” read its lead story.

The newspaper explained to its readers the reasons behind “a day of panic”, pointing to the global stock market’s steepest fall since 2008 as well as the fall in oil prices after the Organization of Petroleum Exporting Countries failed to reach an agreement with Russia last week to cut oil production.