The spread of the COVID-19 coronavirus has intensified around the world, with South Korean cases more than doubling to reach 433 – the highest number outside of China.

Italy on Saturday confirmed its first two deaths from the virus as authorities moved to close schools, bars and other public spaces in 10 northern towns.

Meanwhile in the Middle East, Iran’s health ministry reported a sixth death on Saturday, a day after Israel and Lebanon confirmed their first cases.

Mainland China noted a significant fall in the number of new cases, with 397 reported on Saturday.  The total number of cases in mainland China to 76,288 and there have been 2,345 deaths.

The World Health Organization (WHO) has warned that the window of opportunity to stem the deadly epidemic was “narrowing” amid concern about a surge in cases with no clear link to China.

This blog is now closed. Read all the latest updates from Sunday, February 23 here.

Israel has expanded quarantine regulations, requiring all those returning from South Korea and Japan to remain in isolation for two weeks. Quarantine was previously mandated for Israelis returning from China, Thailand, Singapore, Hong Kong and Macau.

The move came as Israel’s Health ministry said nine South Korean nationals who visited Israel and the West Bank in February have tested positive for the virus.

The Palestinian Interior Ministry issued a similar instruction on Saturday.

All the nine tourists returned to South Korea and it is currently unknown whether they were infected with the virus before or after arriving in Israel.

More and more countries are reporting cases of the new coronavirus, with WHO chief Tedros Adhanom Ghebreyesus warning that the window of opportunity for containment is narrowing.

The UN health agency has been criticised for a slow response to the epidemic as well as previous health emergencies.

Al Jazeera’s Inside Story programme discusses whether a change in approach is needed.

Read more here and watch the full video below.

The United States has raised the travel advisory level for South Korea to “Level 2: Exercise increased caution” as the number of coronavirus cases in the Asia Pacific nation surged to 433.

According to a statement on the US State Department’s website, travellers to South Korea should avoid contact with sick people and clean their hands often with soap and water.

Older adults and people with chronic medical conditions should discuss travel with their healthcare provider and consider postponing non-essential travel, the statement said.

Iranian officials have reported a sixth death from the new coronavirus.

The governor of Markazi province told the official IRNA news agency that tests of a patient who recently died in the central city of Arak were positive for the virus.

Ali Aghazadeh said the person was also suffering from a heart problem.

It is not clear whether the sixth fatality is included in the 28 cases confirmed by Iran earlier on Saturday.

A football match in Italy’s second division was called off around one hour before the scheduled kick-off because of fears over the spread of the virus.

Italian news agency ANA said the Ascoli-Cremonese match was postponed because the visiting side are from the Lombardy region in the north of Italy where 30 cases have been reported so far.

Sports site Gazetta dello Sport said both teams were already at the stadium when they were told of the postponement and that a bus with Cremonese fans was turned back.

FARS: Cinemas and art events closed for a week in Iran

All cinemas and art events across Iran will be closed for one week to try and stop the spread of the coronavirus in the country, semi-official news agency FARS reported.

Iran’s Hajj Pilgrimage Organization has reportedly cancelled all trips for pilgrims travelling to Iraq in a bid to prevent the spread of the coronavirus, Al Jazeera’s Dorsa Jabbari said from the Iranian capital, Tehran.

She added that Iranian officials have decided to close all of Iran’s five land borders with Iraq and are mulling taking action to restrict visits to holy shrines in Qom – where the virus has killed two people – and other nearby places.

It said the shutdown would begin on Sunday in and last two days in Qom and a week in Arak. 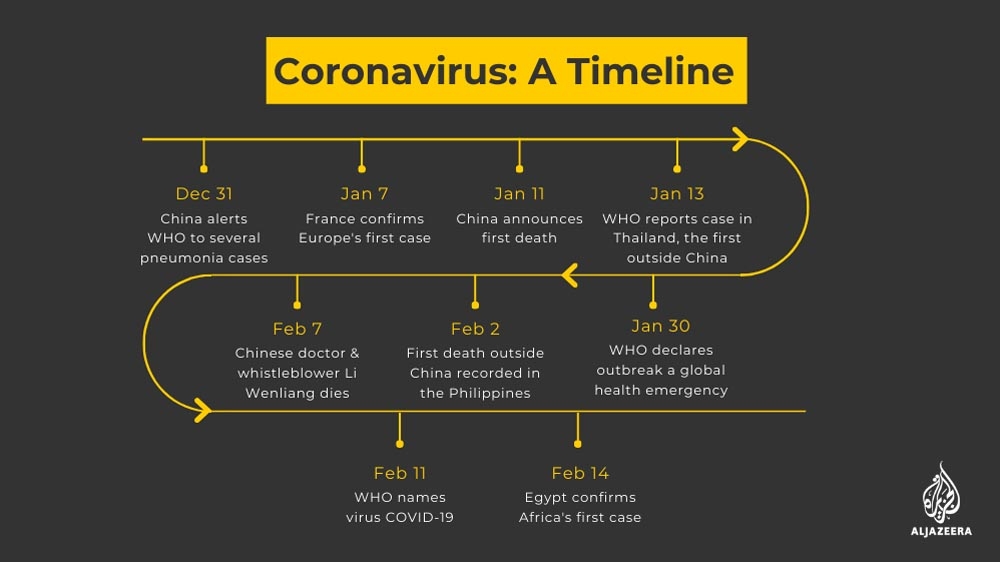 Managing Director Kristalina Georgieva presented the outlook to central bankers and finance ministers from the world’s 20 largest economies at a meeting in Riyadh but said the IMF was also looking at more dire scenarios if the outbreak lasts longer and spreads more globally.

US says Russia is behind disinformation campaign

Thousands of Russian-linked social media accounts have launched a coordinated effort to spread alarm about the coronavirus, disrupting global efforts to combat the epidemic, US officials told AFP news agency.

False personas are being used on Twitter, Facebook and Instagram to advance Russian talking points and conspiracies, including suggesting that the CIA is behind the virus that has claimed more than 2,300 lives, mostly in China.

“Russia’s intent is to sow discord and undermine US institutions and alliances from within, including through covert and coercive malign influence campaigns,” said Philip Reeker, the acting assistant secretary of state for Europe and Eurasia.

“By spreading disinformation about coronavirus, Russian malign actors are once again choosing to threaten public safety by distracting the global health response,” he said.

More than 30 British and European passengers arrived back home in the United Kingdom after spending more than two weeks stuck on a quarantined cruise ship in a Japanese port due to the coronavirus outbreak, UK Foreign Secretary Dominic Raab confirmed.

They landed at a defence ministry airfield in southwestern England on a government-chartered plane from Tokyo and were being taken straight to quarantine facilities.

The Diamond Princess liner was carrying 3,700 people, including 78 Britons, when it was quarantined in Yokohama on February 5.

Arrived: @DominicRaab confirms that 32 British and European citizens have been brought safely home from Japan

The victim was a female resident in Milan’s Lombardy region, Ansa said.

Iran reported one more death among 10 new cases of coronavirus, bringing the total number of deaths in the Islamic republic to five and infections to 28.

“One of the new cases has unfortunately passed away,” he added, noting that eight of them had been hospitalised in Qom and two in Tehran.

WHO concerned about cases with no clear link

The WHO is concerned about the number of coronavirus cases with no clear epidemiological link, its director general said on Saturday.

“Although the total number of cases outside China remains relatively small, we are concerned about the number of cases with no clear epidemiological link, such as travel history to China or contact with a confirmed case,” Tedros Adhanom Ghebreyesus said in a briefing.

According to available data, the disease remains mild in 80 percent of coronavirus patients, and is severe or critical in 20 percent of patients, he said. The virus has been fatal in 2 percent of reported cases.

The foundation pledged the nine-figure sum towards efforts to detect the new coronavirus that causes the disease, to provide protection for at-risk populations and to develop a vaccine as well as treatment.

In his letter to Gates, Xi said: “I deeply appreciate the act of generosity of the Bill & Melinda Gates Foundation and your letter of solidarity to the Chinese people at such an important moment.”

Some 100 passengers who were in close contact with infected people on board began disembarking from the coronavirus-stricken Diamond Princess cruise ship, local media said.

They included the last batch of Japanese passengers to leave the ship while some foreign passengers were still waiting on board for chartered aircraft to be sent by their governments. Around 970 passengers disembarked earlier this week.

Television footage showed a driver in a white protective suit at the wheel of a bus with the curtains drawn so that passengers could not be identified.

The first of these ships, the Blue Whale, arrived in Wuhan, the epicentre of the outbreak, on Friday from Yichang, a nearby city down the Yangtze River.

The seven ships will provide 1,469 beds in total.

Australia to allow return of some Chinese students

The Australian government said it will allow the return of some Chinese high school students who have been blocked from entering the country due to coronavirus restrictions.

Australian officials said the targeted easing of the ban would allow about 760 Chinese high school students – none from Hubei province, which is the epicentre of the outbreak – to apply to return.

“It is incredibly important that we bring some normality back to the international student market,” Education Minister Dan Tehan told reporters. “It is a small step we are taking, it is a precautionary step.”

South Korea reported 142 new confirmed cases of the coronavirus, almost all linked to outbreaks at a hospital in Cheongdo county and a church in Daego city, bringing the national tally to 346.

Korea’s Centers for Disease Control and Prevention (KCDC) designated both the city of Daegu, which has a population of 2.5 million people, and Cheongdo county, home to around 43,000 people, as “special care zones” on Friday as case numbers began to surge upwards.

Cases from the Cheongdo hospital jumped in the latest daily figures, with the total rising from 16 to 108 overnight.

Two cases were reported in Busan, the first in South Korea’s second-largest city, while the Island of Jeju, a spot popular with domestic and international tourists, also recorded its first case.

Mainland China had 397 new confirmed cases of coronavirus infections by the end of February 21, the country’s National Health Commission said on Saturday, marking a significant drop from the 889 cases recorded a day earlier.

That brings the total accumulated number of confirmed cases in mainland China so far to 76,288.

The death toll from the outbreak in mainland China reached 2,345 as of the end of February 21.

The central province of Hubei, the epicentre of the outbreak, reported 109 new deaths, while in the provincial capital of Wuhan, 90 people died.

Wuhan woman with no symptoms infects five relatives with coronavirus

A 20-year-old Chinese woman from Wuhan, the epicentre of the coronavirus outbreak, travelled 675km (400 miles) north to Anyang where she infected five relatives, without ever showing signs of infection, Chinese scientists reported, offering new evidence that the virus can be spread asymptomatically.

According to the report by Dr Meiyun Wang of the People’s Hospital of Zhengzhou University and colleagues, doctors isolated the woman and tested her for the virus after her relatives started getting sick.

Initially, the young woman tested negative for the virus, but a follow-up test was positive.

All five of her relatives developed COVID-19 pneumonia, but as of February 11, the young woman still had not developed any symptoms, her chest CT remained normal and she had no fever, stomach or respiratory symptoms, such as cough or sore throat.

The case study was published in the Journal of the American Medical Association.

British passengers from virus-hit cruise ship due to arrive home

Some 35 British passengers were due to arrive back home on Saturday after spending more than two weeks stuck on a quarantined cruise ship in a Japanese port due to the coronavirus outbreak.

They were landing at a defence ministry airfield in southwestern England on a government-chartered plane from Tokyo and being taken straight to quarantine facilities.

The Diamond Princess liner was carrying 3,700 people, including 78 Britons, when it was quarantined in Yokohama on February 5. More than 620 passengers on board have been infected with the coronavirus, the most outside mainland China.

A patient in the northern city of Padua has died after being infected with the coronavirus, becoming the first Italian victim of the disease, Ansa news agency reported.

The deceased was aged 78, it said.

Read all the updates from Friday, February 21 here.