Indian police on Sunday accused an army officer and two associates of planting weapons on the bodies of three labourers killed in Kashmir to make it look as though they were armed fighters in a staged gun battle.

Their July deaths sparked a furore in the Indian-administered Kashmir.

Captain Bhoopendra Singh has been charged with murder, conspiracy and other offences, the police statement said. He is now in military detention. The two civilian “sources”, who were with him at the time, are in police custody.

A police statement issued late on Sunday said the officer and two others “planted illegally acquired weapons and material on their dead bodies after stripping them of their identities and tagged them as hardcore terrorists in possession of war-like stores.”

In September, the Indian army admitted its soldiers had exceeded powers under the controversial Armed Forces Special Powers Act (AFSPA), which accords impunity to soldiers in the killing of the civilians.

The army had initially claimed that the three men were killed in a gun battle in the village of Amshipora in south Kashmir and that three weapons were found on them. The bodies were hurriedly buried in a remote border area.

The men’s families in the remote mountainous area of Rajouri identified them one month later from photographs that circulated on social media. The families said the three had only been looking for work in Kashmir’s apple orchards.

Javaid Ahmad, 25, whose younger brother, Ibrar Ahmad, was among the three people killed in the gun battle, said that the family has “lost peace and sleep in search of justice.”

“One of them was my brother and the other two were cousins. We don’t know whether we will get justice or not,” said Ahmad, who lives in Rajouri district of Jammu.

“We don’t know the whole story yet, we must be told every truth behind the barbaric act in which we lost three young family members,” he told Al Jazeera.

The controversy sparked rare separate investigations by the Indian army, which has more than 500,000 troops in Kashmir and the police, who said they were only informed of the supposed firefight after the killings which violated the normal rules of engagement.

The army said last week only that the recording of evidence in the case had been completed and action would follow.

Following the investigation, the bodies of the three men were exhumed in September and returned to their families after DNA tests.

A local court has asked the army whether the accused officer should be tried in a civilian court or subjected to a military court martial, according to the statement.

Under the AFSPA, an emergency law applied in Kashmir since 1990 when an armed rebellion erupted against Indian rule, Indian soldiers deployed in the region cannot be tried in a civilian court unless New Delhi agrees.

No such permission has ever been granted during the last 30 years, despite dozens of requests by the police after investigations into actions by the security forces.

Guftar Ahmad Chowdhary, a rights activist based in Rajouri, told Al Jazeera that justice for the three men is a “long battle”.

“We are waiting when the trial will start. For the families, it’s just the fight for justice that has begun now.”

Human rights activists in Kashmir point out that in the past army has killed many civilians in staged gun battle after terming them “rebels” to claim monetary benefits and medals.

In 2010, a police investigation revealed the army killed three civilians in a staged gun battle at Machil area near the Line of Control in Kupwara district. The three civilians were lured to Machil and killed there before being labelled “militants” by the army.

Tens of thousands of people, mainly civilians, have died in the decades-old conflict.

Rifat Fareed contributed to the report from Srinagar 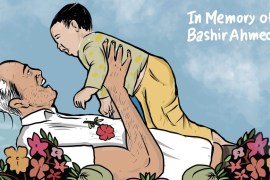 An officially staged photo-op involving a dead Kashmiri and a toddler demonstrates another level of depravity in India. 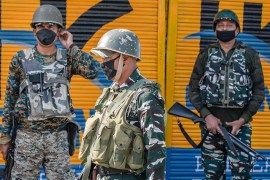 The Indian army, which initially said the dead were Pakistani ‘terrorists’, said it is investigating the incident. 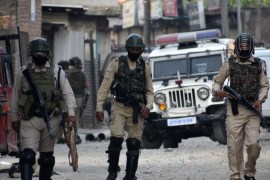