Authorities in the United States are searching a home near Nashville, Tennessee, after a powerful blast tore through the city’s downtown area early Christmas morning, damaging dozens of buildings and injuring three people.

Citing law enforcement officials, the Associated Press first reported Saturday that investigators had identified a person of interest in connection to the motor home that exploded about 6:30am local time (12:30 GMT) on Friday.

Investigators were searching a home in Antioche, about 19km (12 miles) south of Nashville, that is associated with that person, the news agency said.

In a Saturday afternoon news briefing, US Attorney Don Cochran said investigators had received more than 500 tips from the public since the powerful blast occurred in downtown Nashville, the capital of the state of Tennessee and legendary home of country music in the US.

“Every single one of those is being followed up by a team of investigators. That’s the stage we’re at in this investigation. We are still continuing to follow every lead that we have and we will continue to do so until we find out what’s happened,” Cochran told reporters.

The FBI is in charge of the continuing investigation, and officials from the Bureau of Alcohol, Tobacco, Firearms and Explosives, as well as local police, are also involved.

They have not released any information yet about a motive or who was responsible for the blast.

Officials have said a recreational vehicle exploded after a recorded message warned that “a bomb would detonate in 15 minutes”.

The blast, which police said they believe was “an intentional act”, damaged numerous buildings in the downtown area and sent debris and large plumes of black smoke into the air. Three people suffered non-life-threatening injuries.

Cochran said the scene of the explosion “is like a giant jigsaw puzzle created by a bomb that throws pieces of evidence across multiple city blocks”.

“I am confident in the team we have, that we will get to the bottom of this,” he added.

On Saturday morning, Tennessee Governor Bill Lee said he had toured the site of the explosion.

“The damage is shocking and it is a miracle that no residents were killed,” he tweeted.

This morning I toured the site of the bombing. The damage is shocking and it is a miracle that no residents were killed. @MariaLeeTN and I continue to pray for those who sustained injuries from the blast.

Lee said he sent a letter to Donald Trump requesting that the US president issue an emergency disaster declaration to get support from the federal government to help in the recovery efforts.

The governor said preliminary reports showed that 41 businesses were damaged.

“Federal assistance under the Stafford Act is necessary to supplement the efforts and available resources of the State, local governments, disaster relief organizations and compensation by insurance for disaster-related losses,” the letter reads.

The mayor of Nashville, John Cooper, on Friday instituted a curfew in the downtown area where the blast occurred. It is expected to be lifted at 4:30pm local time (22:30 GMT) on Sunday.

“The federal government is in charge and they will collapse the scene as much as possible as soon as they can,” Drake said in a video posted on Twitter.

He also said during the news briefing that there is no further known threats in Nashville. “Let me reiterate that Nashville is safe,” he said.

On Friday, the police chief told reporters that investigators at the scene “found tissue that we believe could be remains”.

Doug Korneski, special agent in charge of the FBI’s Memphis field office, said on Saturday that investigators are currently working to identify the tissue.

Asked if officials believe the tissue may be tied to the person responsible for the explosion, Korneski answered, “We do not know at this point, but we are working under that assumption and processing it as such.”

The explosion occurred near an AT&T office and caused widespread communications outages in Tennessee and other nearby states.

Police emergency systems in Tennessee, Kentucky and Alabama, as well as Nashville’s COVID-19 community hotline and a handful of hospital systems, were out of service, The Associated Press news agency reported.

“Our teams continue to work around the clock on recovery efforts from yesterday morning’s explosion in Nashville,” AT&T said in a statement Saturday morning.

The company did not say exactly how many customers were affected by the outages.

It said teams were on site to try to restore service and two portable cell sites have been set up in downtown Nashville, but added that challenges persist, including an overnight fire that required an evacuation of the building. 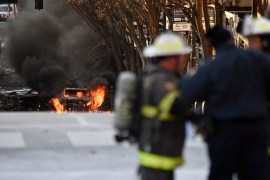