A camper van parked on a downtown street in the US city of Nashville exploded at dawn on Christmas, moments after a recorded message emanating from the vehicle warned of a bomb.

Police called the blast an “intentional act” and said investigators had found possible human remains near the site.

Nashville Mayor John Cooper ordered a curfew imposed around the blast site through the holiday weekend as FBI investigators comb the scene, though police said they were aware of no further threats to Tennessee state’s most populous city.

The blast came just moments after officers responded to reports of gunfire in the area and discovered the recreational vehicle parked outside an AT&T office tower in downtown Nashville at about 6am local time (12:00 GMT).

Some photos showing damage on 2nd Ave North as multiple agencies continue to work and investigate an explosion from earlier this morning. pic.twitter.com/0cWA3oUCDl

Officers quickly went door-to-door in nearby buildings to hustle people to safety, and called for the police bomb squad, which was on its way to the scene when the vehicle blew up, police spokesman Don Aaron said.

The Metro Nashville Police Department posted a photo of the motor home on its Twitter feed and said that the vehicle had arrived in the area at 1:22am (07:22 GMT).

BREAKING: This is the RV that exploded on 2nd Ave N this morning. It arrived on 2nd Ave at 1:22 a.m. Have you seen this vehicle in our area or do you have information about it? Please contact us via Crime Stoppers at 615-742-7463 or online via https://t.co/dVGS7o0m4v. @ATFHQ pic.twitter.com/JNx9sDinAH

Drake, the police chief, said investigators at the scene later “found tissue that we believe could be remains, but we’ll have that examined and let you know at that time”.

Police could not say whether it potentially came from someone inside the vehicle.

The authorities did not immediately say what the motive of the explosion could be.

Cooper, the Nashville mayor, said officials were waiting for the investigation to unfold.

“It will take a little bit of time to get to the bottom of it,” Cooper told reporters. “I do think it was clearly done when nobody was going to be around.”

Tennessee Governor Bill Lee tweeted on Friday morning that federal, state and local law enforcement agencies were on the scene investigating. “We will supply all of the resources needed to determine what happened and who was responsible,” he said.

Early this morning, an explosion occurred in downtown Nashville around Second Avenue and Commerce Street. Federal, state and local law enforcement partners are on the scene to investigate what we believe was an intentional act.

FBI Assistant Special Agent in Charge Matt Foster said federal and local officials were working to investigate several leads, but did not go into specific detail about the continuing probe.

“This is our city, too. We live here, we work here, and we’re putting everything we have into finding who was responsible for what’s happened here today,” Foster told reporters, describing the incident as a “very tragic Christmas Day event”.

“We will find out what happened here,” he added.

MNPD, FBI & ATF investigating the 6:30 a.m. explosion on 2nd Ave N linked to a vehicle. This appears to have been an intentional act. Law enforcement is closing downtown streets as investigation continues. pic.twitter.com/YOfMTaKmTH

Images on Friday morning showed billowing smoke, debris and emergency crews at the blast site in downtown Nashville, an area packed with bars, restaurants and other retail stores.

At least 20 buildings were damaged and US telecommunications company AT&T, which owns a building near the explosion, reported some interrupted services on Friday. The Federal Aviation Administration also temporarily halted flights out of Nashville International Airport because of telecommunications issues linked to the blast.

Buck McCoy, who lives near the area, said the windows of his home were blown out.

“All my windows, every single one of them got blown into the next room. If I had been standing there it would have been horrible,” he told The Associated Press news agency.

Jeremy Schott, who lives a block and a half away from the blast site, described the explosion as “unbelievable”.

“We just heard this blast and we felt the windows and our building shake. We live in a high-rise development on the 26th floor.”

“If you want to kill a lot of people and then you’ll do it during their shopping hours 7:30 at night or two in the afternoon,” he said. “That it is 6:30 on a Christmas morning is about the time there will be the fewest people out possible so that could imply this is a statement, rather act rather than seeking to cause mass casualties.”

The city’s fire department said teams were going into buildings in the explosion area to make sure that the structures were secure and to check whether there were any victims.

A spokesman for Donald Trump said the US president had been briefed on the explosion and would continue to receive regular updates.

Karen Greenberg, director of the Center on National Security at the Fordham University School of Law in New York, told Al Jazeera there was still a lot to understand about the explosion.

“It’s quite frightening. This was a big blast and this could have hurt many people,” she said.

“What was the message that was intended to be sent? And who sent it? A bomb like this leaves a lot of clues. What went into it – where they purchased the materials, where they put them together even. So, it’ll take some time, but they (the FBI) will figure it out.

“The size of it is concerning, but we have no idea who to attribute this to or what it was meant to say.” 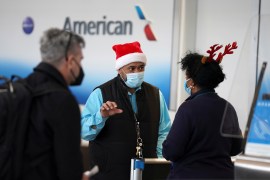 US to require negative COVID-19 tests for all UK passengers

CDC says passengers from the UK must test negative via either a PCR or antigen test within 72 hours of departure. 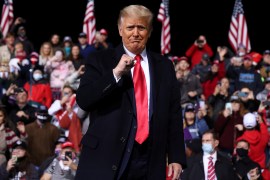 Kill the bill? Here is what might happen to US COVID aid measure

Trump has hinted he might veto legislation passed by Congress if payments to individuals are not increased. 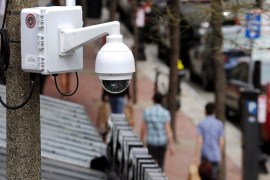 The world of surveillance: Who does ‘Big Brother’ answer to?

We ask whether the surveillance industry is out of control and discuss climate change with activist Nnimmo Bassey.