Lionel Messi broke Pele’s all-time scoring milestone for their clubs by netting his 644th career goal in Barcelona’s 3-0 win over Valladolid on Tuesday.

After receiving the ball near the edge of the area, Pedri deftly rolled his boot over the ball to push it behind him to meet the Argentine’s run.

The slick pass left Messi clear to beat goalkeeper Jordi Masip, who had denied him twice.

“When I started playing football I never thought I’d break any record, especially not the one I achieved today that Pele held,” Messi wrote on Instagram after the match.

“I can only give my thanks to everyone who helped me during these years, my teammates, my family, my friends, and everyone who supports me every day.”

It is yet another record for Messi, who joined Barcelona at age 13 and made his competitive debut at 17 in 2004.

“[The win] shows that we have a strong squad, where there is a lot of competition for playing time,” Barcelona coach Ronald Koeman said.

“It proves that, with a calendar packed with games, we can rest some players. We got this win by playing good football. The team was focused from the start.”

On Saturday, after Messi scored his 643rd goal and equalled Pele’s record, the Brazilian great praised him on Instagram.

“When your heart overflows with love, it is difficult to change your path,” he wrote.

Messi, 33, tried to force his way out of Barcelona in the summer but was frustrated as then-president Josep Maria Bartomeu refused to let him walk away for free.

The captain has since reiterated his commitment to the club, with whom he has a contract until the end of the current season, although there remains a lot of speculation about his future.

Messi also holds the record for most Ballon d’Or wins, claiming his sixth in 2019. 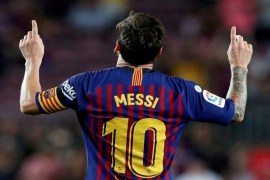 ‘Club of my life’: Messi to stay at Barcelona for another year

The Argentine footballer said he does not want to enter into a court battle with the club about his contract. 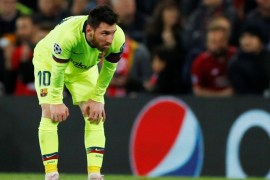 Jorge Messi landed at Barcelona to meet the Catalan club’s officials and discuss his son’s future. 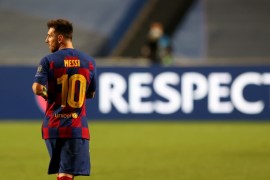 Has Lionel Messi been forced into a U-turn?

Argentine footballer Messi has changed his mind saying he is staying with FC Barcelona.