The United States on Monday issued additional visa restrictions on Chinese officials believed to have engaged in alleged human rights abuses, taking further action against Beijing in the final month of US President Donald Trump’s term.

US Secretary of State Mike Pompeo said in a statement the restrictions affect officials believed to be responsible for or complicit in repressing religious practitioners, ethnic minority groups, dissidents and others.

“China’s authoritarian rulers impose draconian restrictions on the Chinese people’s freedoms of expression, religion or belief, association, and the right to peaceful assembly. The United States has been clear that perpetrators of human rights abuses like these are not welcome in our country,” Pompeo said.

China-US ties have grown increasingly antagonistic over the past year as the world’s top two economies sparred over Beijing’s handling of the coronavirus outbreak, imposition of a national security law in Hong Kong and rising tensions in the South China Sea.

The US on Friday added dozens of Chinese companies, including the country’s top chipmaker Semiconductor Manufacturing International Corp and Chinese drone manufacturer SZ DJI Technology, to a trade blacklist as Trump’s administration continues to ratchet up tensions with China in his final weeks in office.

Washington has slapped travel bans and financial sanctions on officials connected to the crackdown on Uighurs and other Chinese Muslim groups in Xinjiang, as well as on Chinese and Hong Kong officials it accuses of restricting social and political rights in the semi-autonomous Chinese city through the implementation of a harsh new national security law.

Earlier in December, the US imposed visa restrictions on members of China’s ruling Communist Party and their immediate family members.

In response, China announced on December 11 it is revoking visa exemptions for US diplomatic passport holders visiting Hong Kong and Macau, including members of Congress, personnel at non-governmental organisations, and their family members.

“China once again urges the United States to immediately stop meddling in Hong Kong affairs and interfering in China’s internal affairs, and not to go further down the wrong and dangerous path,” foreign ministry spokeswoman Hua Chunying told a news conference on December 11.

Diplomatic ties hit a low point over the summer when the US ordered the closure of the Chinese consulate in Houston and China responded by demanding the US vacate its consulate in the southwestern city of Chengdu.

Analysts have long speculated that Trump will impose harsher measures on China before leaving office on January 20, placing President-elect Joe Biden in a bind in managing the increasingly fractious relationship. 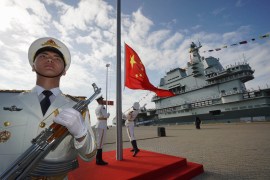 The Shandong was accompanied by four other ships and led Taiwan to deploy aircraft and vessels to monitor the convoy. 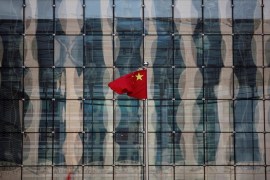 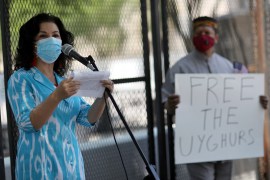 Coalition of US Muslim groups, including Council on American-Islamic Relations, charges OIC with being cowed by China.