Tehran accuses Israel of being responsible for the brazen attack and has pledged retaliation. While proof for the accusation does not exist, Fakhrizadeh’s death fits a pattern previously linked to Israel – a long list of moves against officials in Iran and its nuclear programme, which Israel continues to consider perilous to its existence.

Iranian President Hassan Rouhani was first in line to accuse the United States and Israel of being behind the assassination of nuclear physicist Fakhrizadeh on Friday. Israel has issued only denials. Intelligence Minister Eli Cohen said on Monday he did not know who was behind the killing.

However, the New York Times quoted an unnamed senior Israeli official involved in tracking Iranian nuclear activities as saying, “Iran’s aspirations for nuclear weapons, promoted by Mr Fakhrizadeh, posed such a menace that the world should thank Israel.”

What has also left room for speculation is the timing of the murder. The assassination occurred just days after reports emerged that US President Donald Trump considered an attack on Iran’s main nuclear facility.

Israel’s involvement appears somewhat apparent. Attacks on Iran’s nuclear programme and individuals associated with it have repeatedly occurred over the past decade – always in connection with Israel, which seemingly incorporated pre-emptive attacks into its raison d’etat.

Accordingly, Fakhrizadeh’s murder is only the most recent incident in a sequence of Iranian nuclear scientist killings. With the apparent aim of regressing Tehran’s nuclear development, four Iranian scientists were assassinated between 2010 and 2012. Another barely survived an attempt on his life.

Quantum field theorist and Tehran University Professor Masoud Alimohammadi was killed on January 12, 2010, in a bomb blast. Majid Jamali Fashi, a Mossad spy, confessed and was sentenced to death for the attack. Ten months later, nuclear scientist Majid Shahriari, who worked for the Atomic Energy Organization of Iran, was also killed in a bombing.

Israel has neither confirmed nor denied its involvement in these murders. However, Moshe Ya’alon, minister of defence under Prime Minister Benjamin Netanyahu from 2013 to 2016, hinted at Israel’s involvement during an interview with Germany’s Der Spiegel.

“We will act in any way and are not willing to tolerate a nuclear-armed Iran. We prefer that this be done by means of sanctions, but in the end, Israel should be able to defend itself,” Ya’alon said.

In 2013, the attacks reportedly ceased because of pressure from President Barrack Obama’s White House, which instead worked on peacefully restricting Iran’s nuclear development, culminating in the landmark 2015 nuclear accord with world powers.

Assassinations have only been one part of the strategy to undermine Iran’s nuclear efforts with cyberwarfare also playing a significant role. First uncovered in 2010 and developed in a collaboration between the US and Israel, the computer worm Stuxnet caused severe damage to Iran’s nuclear facilities.

The Institute for Science and International Security concluded that Stuxnet damaged up to 1,000 centrifuges – 10 percent of all installed – in Iran’s main enrichment plant at Natanz. The report concluded, “if the goal was to destroy a more limited number of centrifuges and set back Iran’s progress … while making detection difficult, it may have succeeded, at least temporarily.”

Similar to Stuxnet, Israel is said to have developed the Flame malware programme in cooperation with the American National Security Agency (NSA) and Central Intelligence Agency (CIA). Flame secretly mapped and monitored Iranian computer networks and returned a steady stream of information useful in disrupting its nuclear programme.

The most recent incident linked to Israel occurred in 2020 when it reportedly sabotaged various Iranian nuclear and missile programmes. The pivotal incident transpired at the Natanz nuclear power plant on July 2.

After a mysterious explosion, fires broke out inside the facility, which caused “significant damage”. Iranian officials said they believed the fire resulted from a cyberattack but did not cite any evidence.

However, Dalia Dassa Kaye, director of the Center for Middle East Public Policy at the RAND Corporation, suspected Israeli involvement.

“There is a pattern of escalation and a context that would suggest a motive on the Israeli side to target the Iranians,” Kaye said.

The damage caused had the potential to delay Iran’s nuclear weapons programme by a year or two, experts concluded.

Israel’s proclivity for pre-emptive attacks dates back to the early 1980s when it bombed the Iraqi nuclear reactor Osirak, which was still under construction. Israel claimed self-defence. The incident is known as Operation Opera and is the basis for key literature in international law on the issue of pre-emptive attacks. For Israel, it established a modus operandi that appears to be relevant to this day.

However, concerning Fakhrizadeh’s death, there might be more to the story than merely putting Iran’s nuclear programme in jeopardy.

The combination of Iran’s recent violations of the 2015 nuclear agreement and President-elect Joe Biden’s willingness to re-enter the accord with Iran is likely relevant.

So is the report that President Trump recently asked his advisers for options regarding an attack on Iran.

It would appear Israel, similar to its current settlement policies in the occupied Palestinian territories, seeks to create facts before Trump’s successor is inaugurated on January 20 – making it more difficult for the United States to restore the nuclear deal Israel has vehemently opposed, particularly if Tehran follows up on its retaliation threats.

Mark Fitzpatrick, an associate fellow at the International Institute for Strategic Studies, suggests Fakhrizadeh’s assassination was not meant to stop Iran from getting a nuclear weapon but targeted Biden’s potential return to the Iran nuclear accord.

“The prospect of restoring the Joint Comprehensive Plan of Action [nuclear deal] in the upcoming Joe Biden administration has become even more fraught. This was the main motive for the murder,” Fitzpatrick argues. 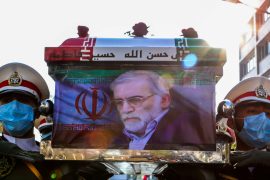 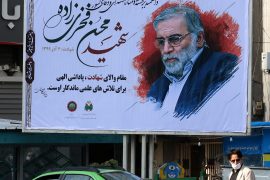 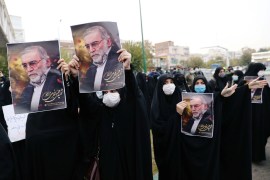 What’s next for Iran after Fakhrizadeh assassination?