How well do you know the United States? Here are 30 maps that show what you need to know about its economy, demographics, geography, and major issues.

Where is unemployment highest?

At the end of September, the national unemployment rate had fallen to 7.9 percent from a peak of 14.7 percent in April. About 12.5 million people were unemployed across the country. 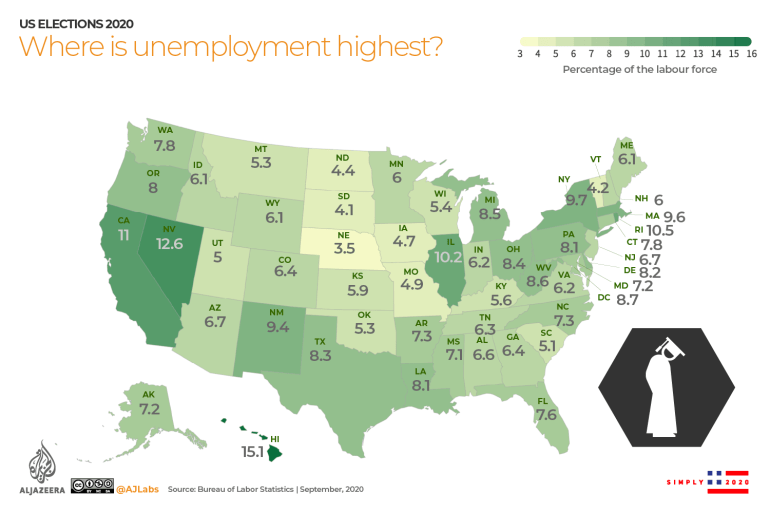 Where is homelessness most pronounced?

An estimated 567,715 people across the US are experiencing homelessness on any given night. 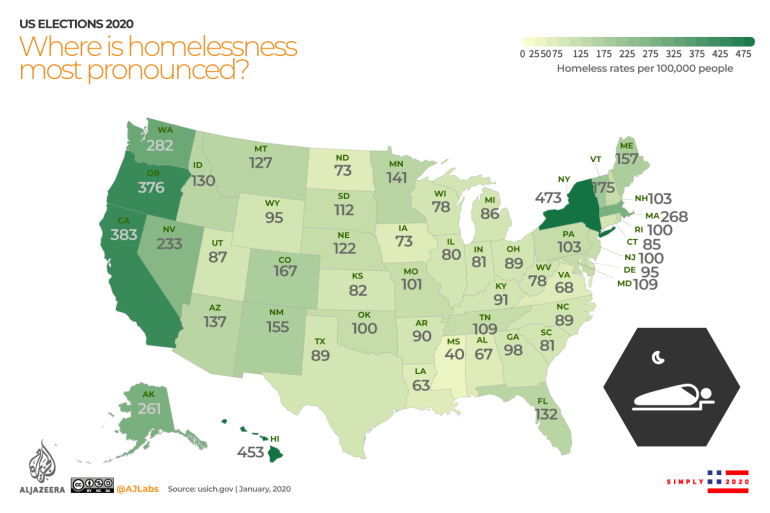 Which state has the strongest economy?

Here’s how each state’s GDP compares to that of countries around the world. 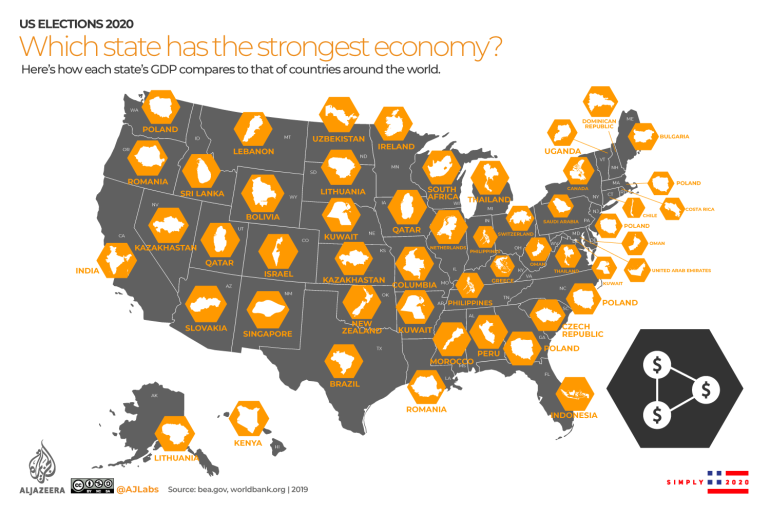 Who is the richest person in each state?

There are 623 billionaires living in 43 US states. The richest person in America is Jeff Bezos from Seattle, Washington, who has an estimated net worth of $113bn. 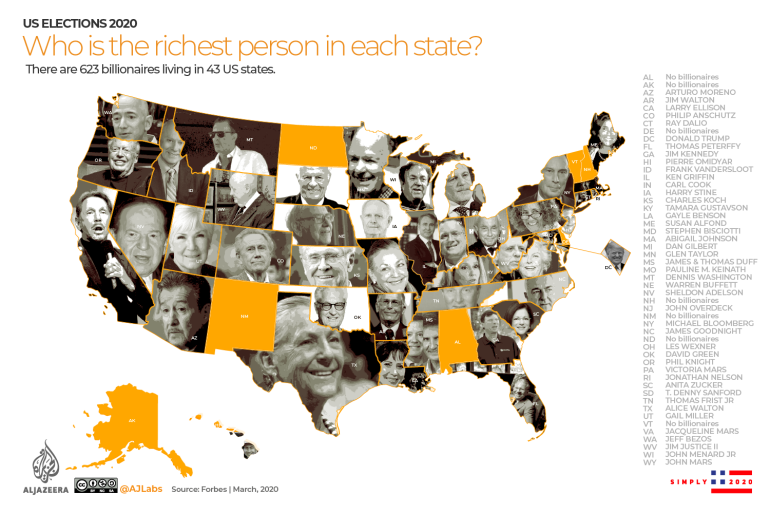 What is the minimum wage in each state?

The federal minimum wage is $7.25 per hour, a rate that has been in place since 2009. But each state can set its own minimum wage standards. 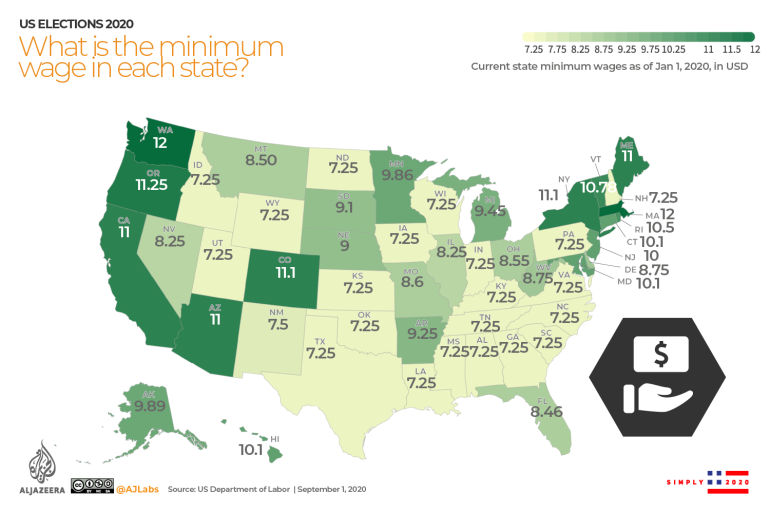 Which state has the highest income tax rate? 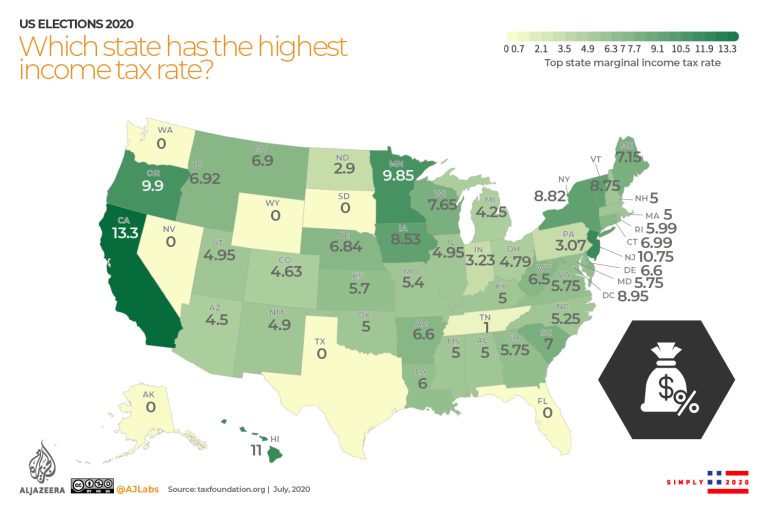 The US population in 2019 was 76 percent white, 13 percent Black, six percent Asian and five percent ‘other’. Vermont has the highest percentage of white residents at 94 percent, while Hawaii has the lowest at 24 percent. Here is how many people self-identify as ‘white’, according to the census. 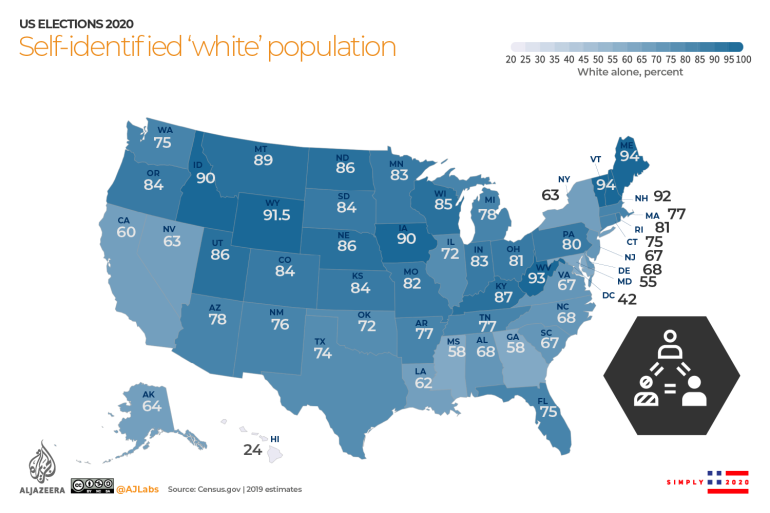 The US population in 2019 was 76 percent white, 13 percent Black, six percent Asian and five percent ‘other’. At 38 percent, Mississippi has the highest percentage of Black residents, while Montana has the lowest at less than 1 percent. Here is how many people self-identify as ‘Black’, according to the census. 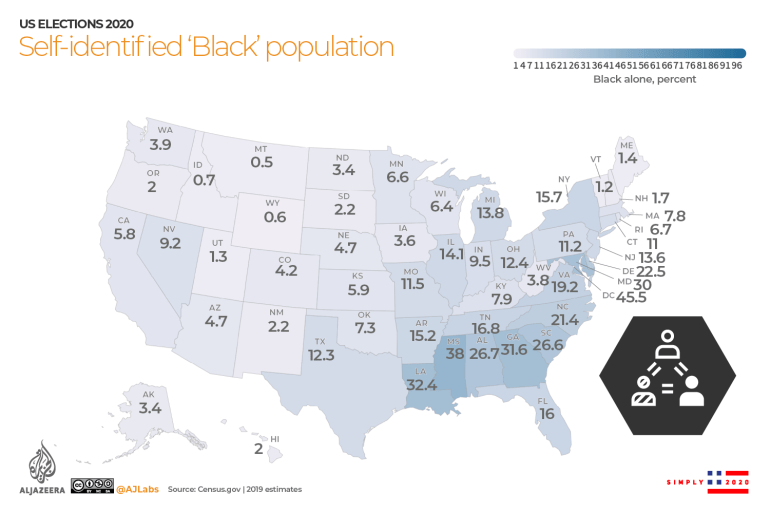 How young is each state’s population? 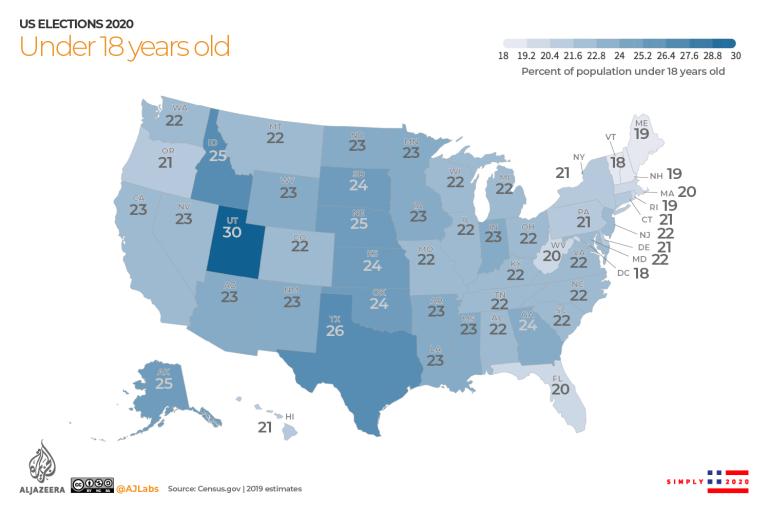 Where do people live?

The US has a population of approximately 330 million. California has about 40 million residents, while Wyoming has just over 500,000 inhabitants. Here’s what the US would look like if you replaced each state with a country with the nearest equivalent population. 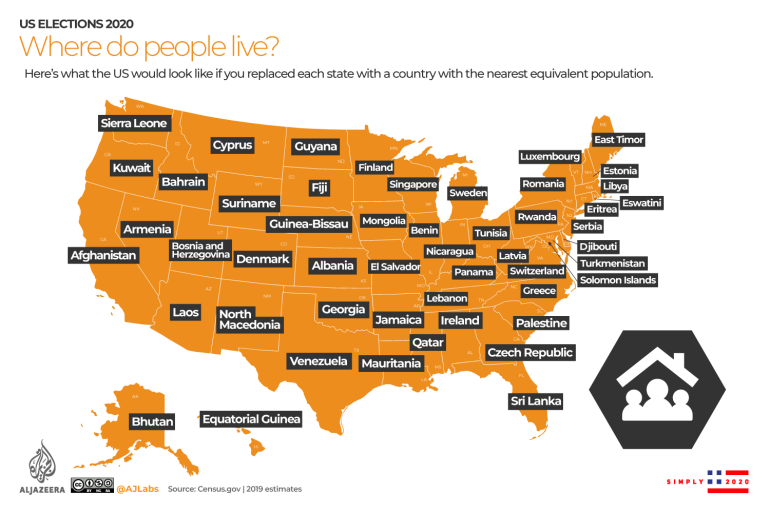 How densely populated is each state? 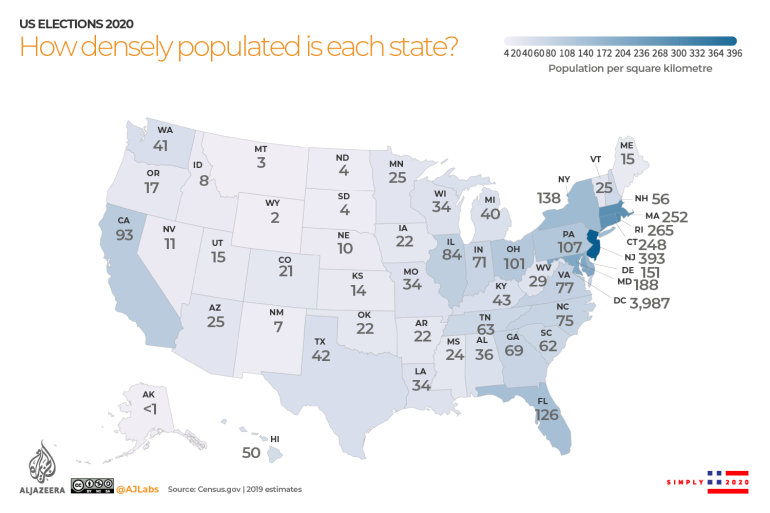 In 2019, the US population was 49.2 percent male and 50.8 percent female. This map shows the percentage of females in each state. 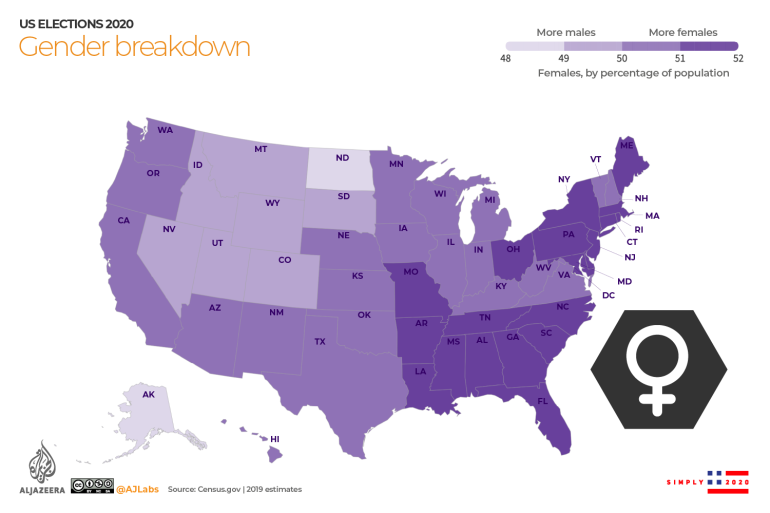 Muslims in the US

The Pew Research Center estimated that there were 3.45 million Muslims in the US in 2017, accounting for roughly 1.1 percent of the total population. At 3 percent of the population, New Jersey has the largest Muslim community across the country. 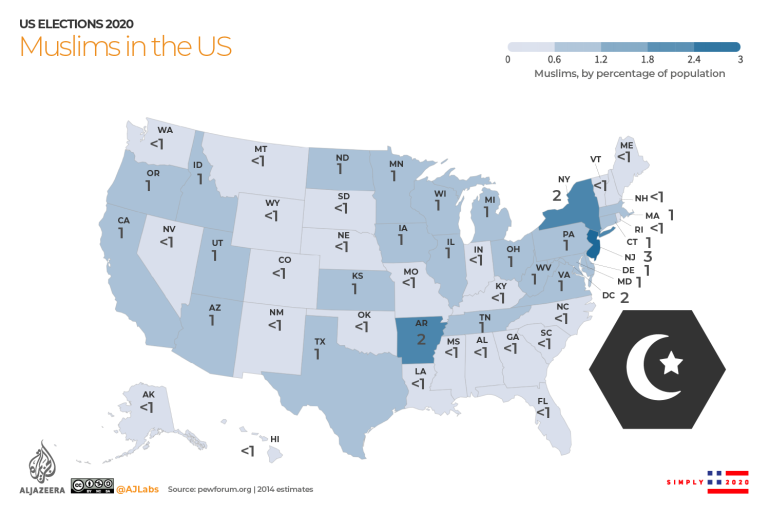 Population born outside the US

About 40 million people, or 12 percent of the US population, were born in another country. In California, one in four people was born outside the US. West Virginia has the fewest number of people born outside the US at 1.6 percent. 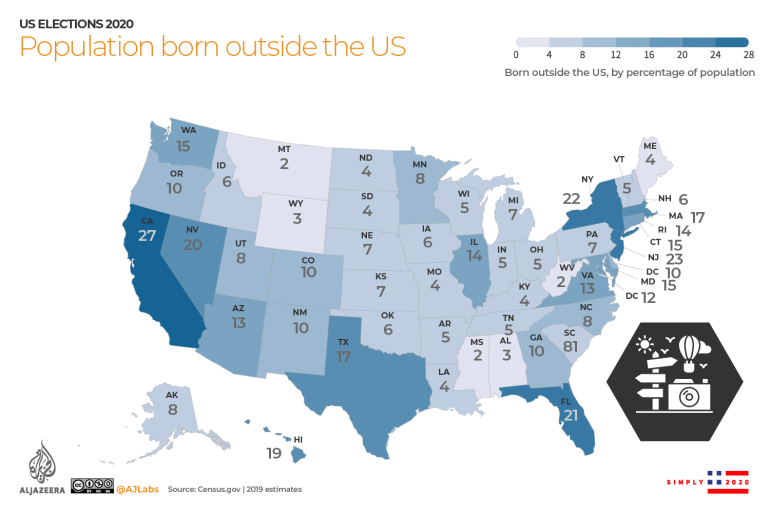 Which states receive the most foreign visitors?

In 2019 the US received 81 million non-immigrant entries into the country, including tourists, business travellers, students and diplomats. The most-visited state was California, with 15 million entries. The least-visited was South Dakota, with 21,000 visitors. 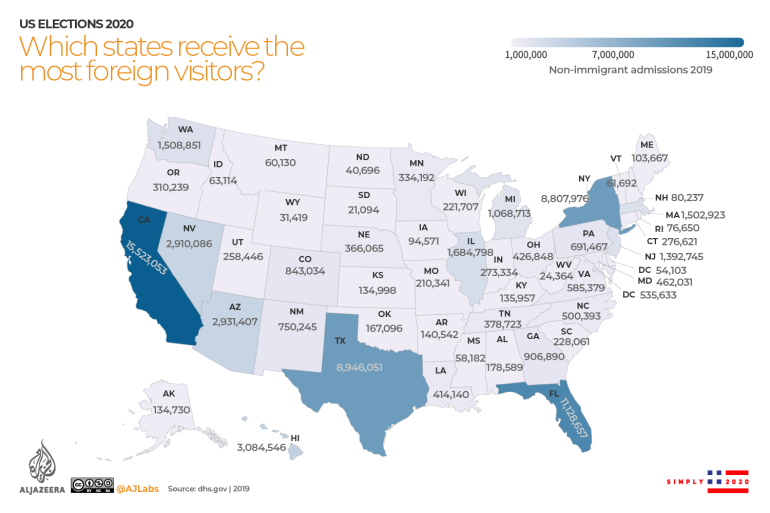 Which states have the highest suicide rates?

In 2018, suicide was the tenth leading cause of death in the US, claiming the lives of more than 48,000 people, according to the National Institute of Mental Health. With 25 suicides per 100,000 people, Wyoming has the highest suicide rate. Washington, DC, has the lowest at approximately 7 percent. 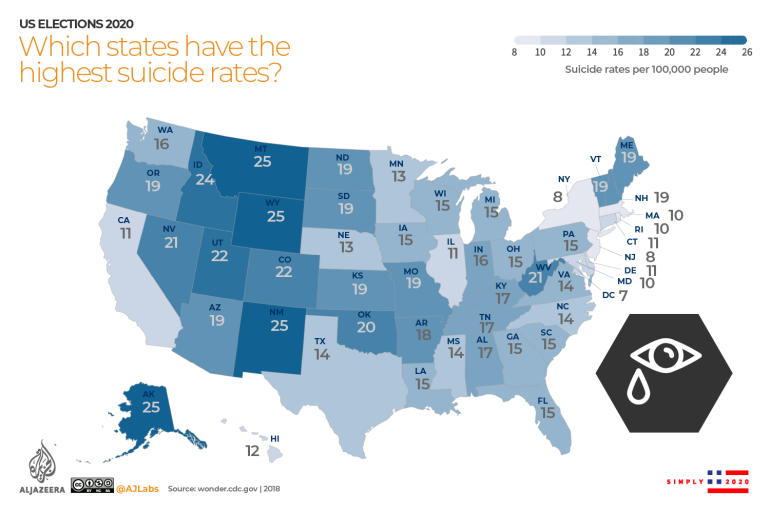 Which states have the most murders? 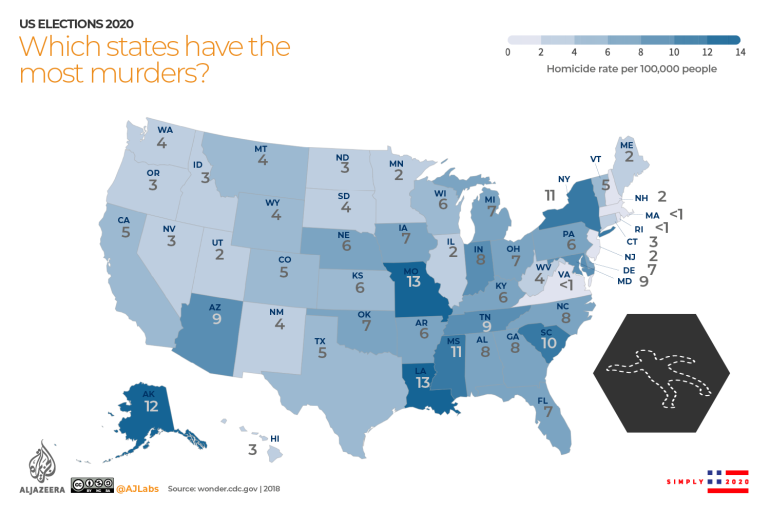 How big is each state?

The US is one of the world’s largest countries. Its biggest state, Alaska, is more than twice the size of its second-largest, Texas. The smallest state is Rhode Island. Here we show you what countries are roughly the same size as each state. 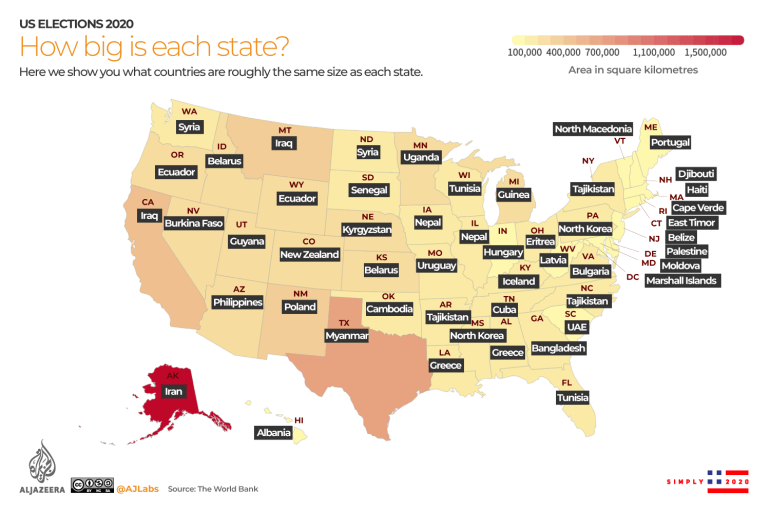 The coldest temperature ever recorded in the US was -62C (-80F) in Beetles, Alaska, on January 23, 1971. The map below shows the lowest recorded temperature in each state. 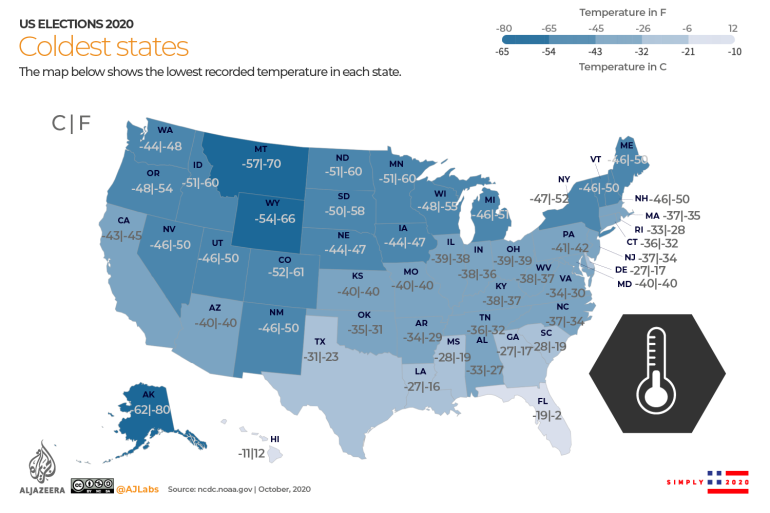 The hottest temperature ever recorded in the US was 56.7C (134F) in Death Valley, California, on July 10, 1913. The map below shows the highest recorded temperature in each state. 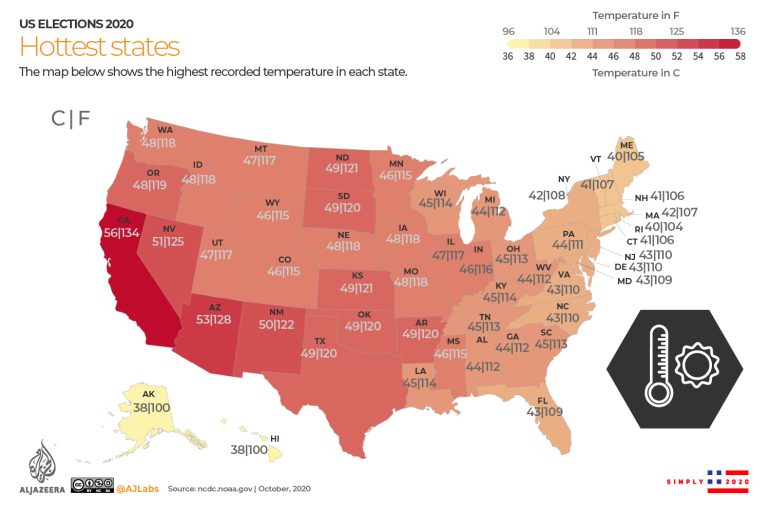 What is the tallest building in each state? 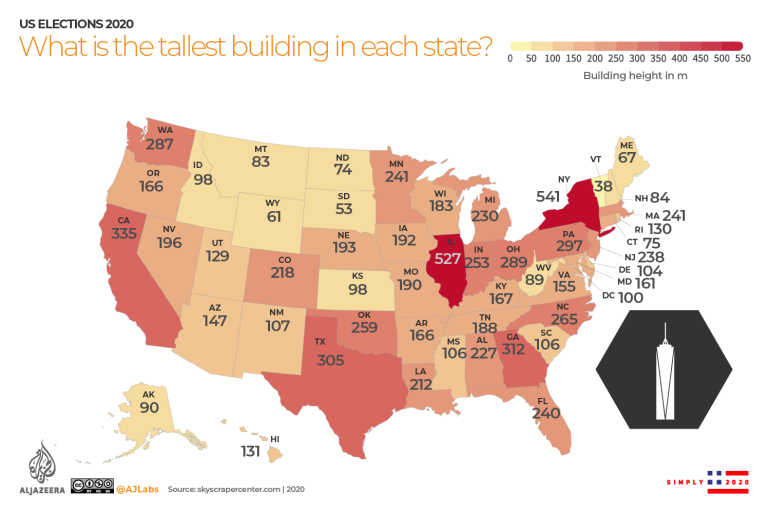 Which states have the biggest prison population? 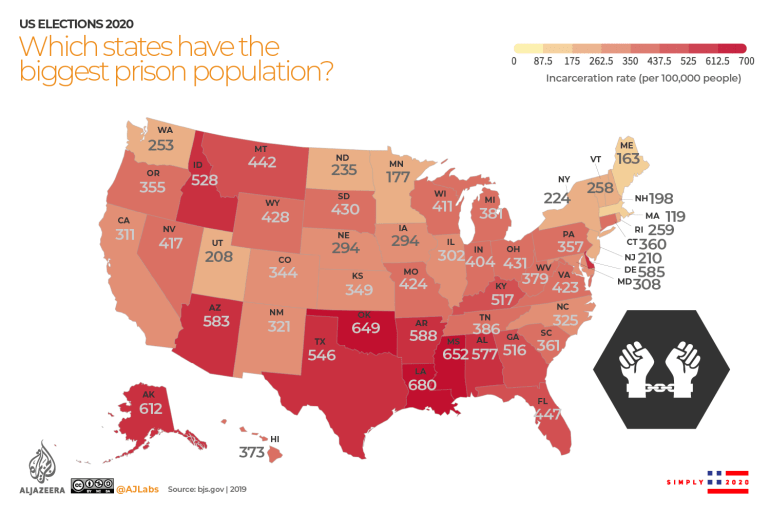 Number of state executions over the past decade 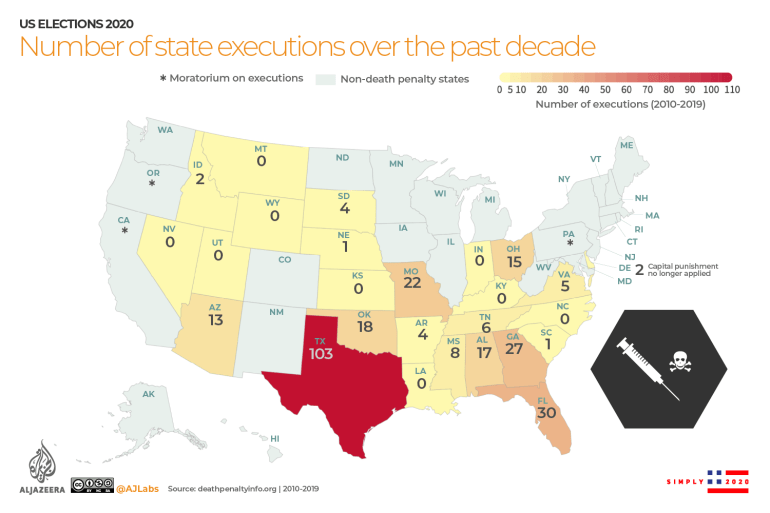 Which states have the most guns?

Nearly 30 percent of adults in the US currently own a gun, making the country first globally in gun ownership. According to the Small Arms Survey, there are more than 393 million guns in the US. The map below shows the proportion of adults living in a household with a firearm. 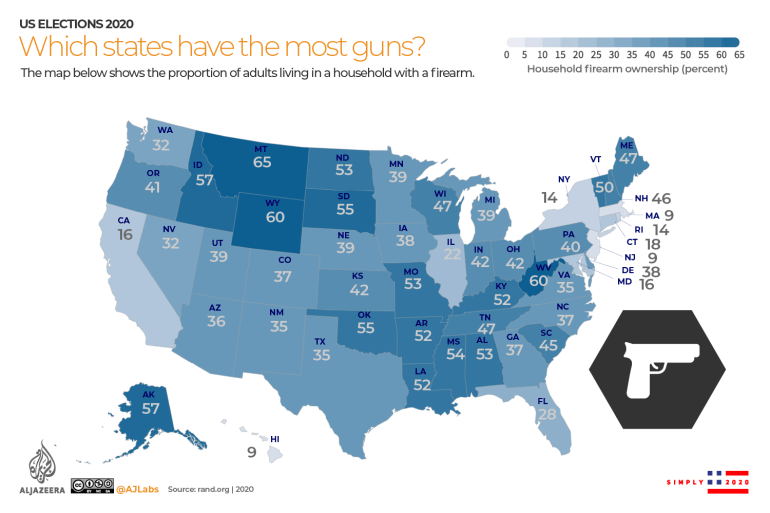 Where is recreational marijuana legal?

Eleven states across the US have legalised the sale of marijuana for recreational purposes. Below are each state’s marijuana laws,from fully illegal, medical-use only, medical and decriminalised, decriminalised and fully legal. 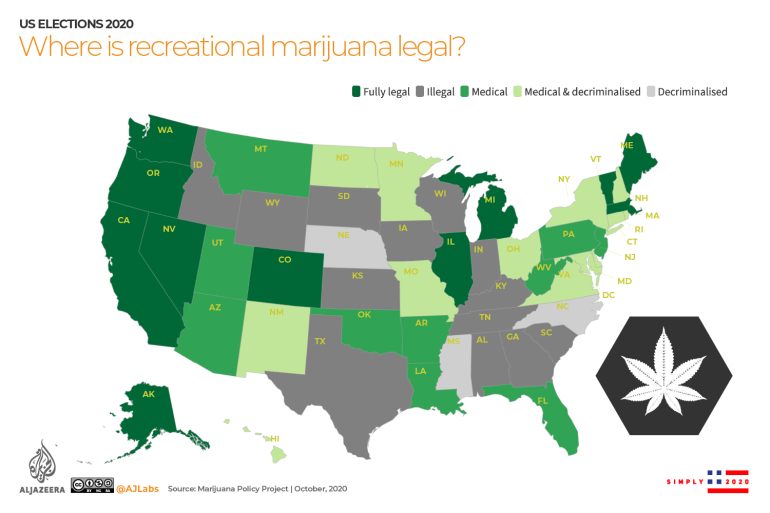 Approximately 60 percent of eligible voters cast a ballot in the 2016 elections. The map below shows voter turnout for each state. 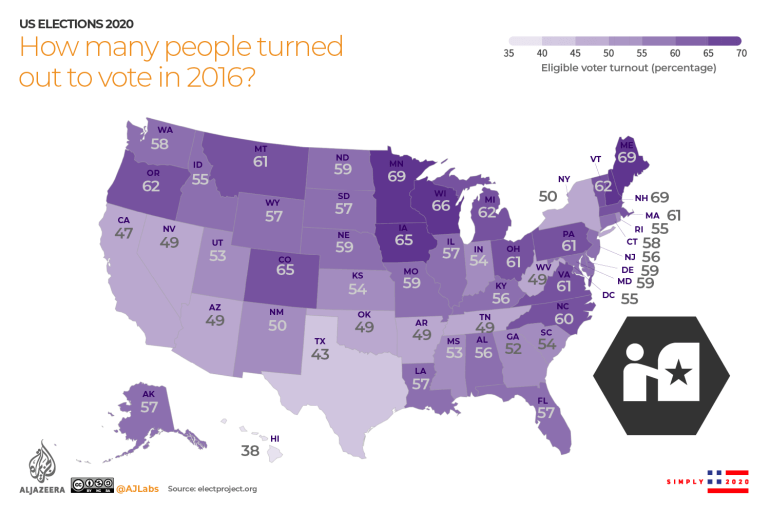 Where can Confederate monuments be found?

Racial justice protests have renewed calls to remove Confederate statues across the US. Many say the monuments celebrate racism and slavery, while their defenders say they are symbols of a history that extends beyond slavery. The Southern Poverty Law Center says there are about 1,700 Confederate monuments across the country. The map below shows where they are. 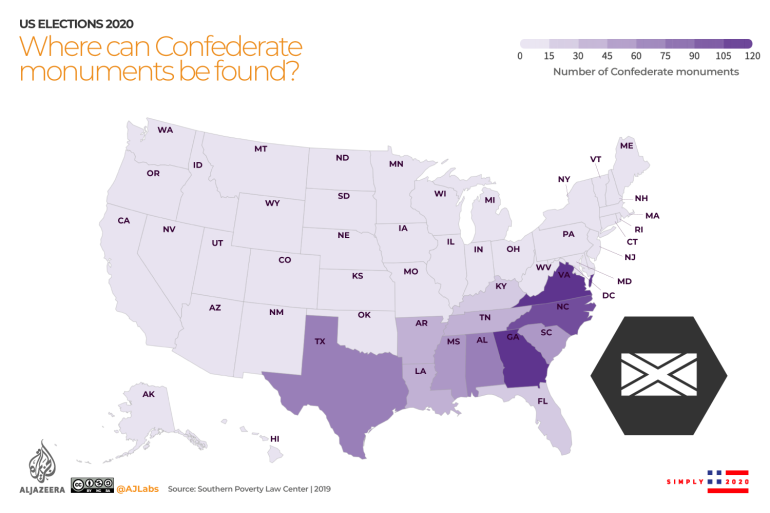 When did each state join the Union?

When the US declared independence from the British in 1776, it consisted of 13 former British colonies. More areas gradually joined the union in the years that followed, with Alaska and Hawaii being the last states to join the union in 1959. The map below shows when each state joined. 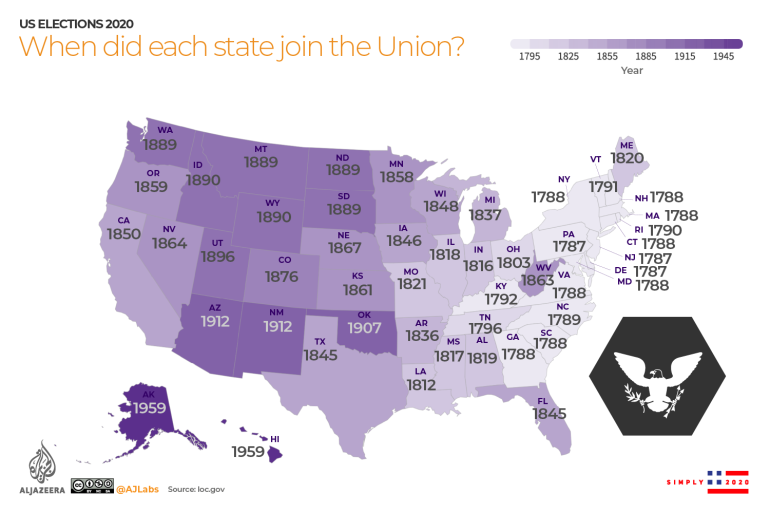 At over nine million, the US has recorded the most confirmed COVID-19 cases in the world. The map below shows the number of confirmed infections in each state, adjusted for each state’s population. 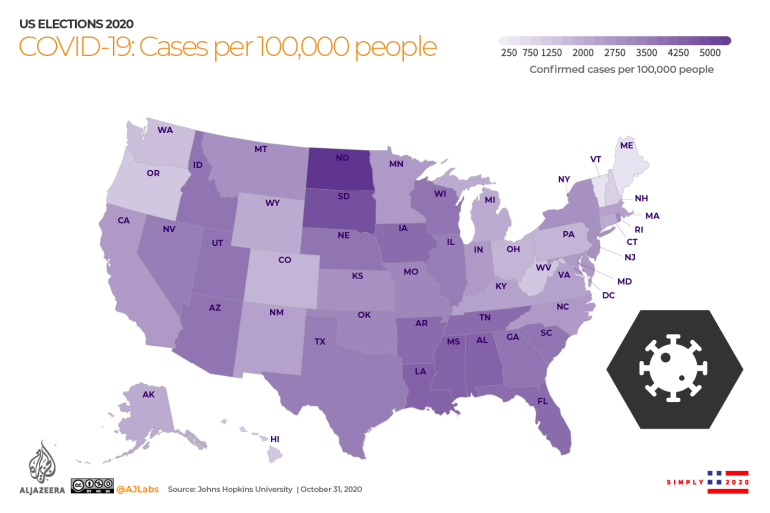 The US has recorded 230,000 deaths linked to the novel coronavirus – the highest number in the world. The map below shows the number of COVID-19 deaths in each state, adjusted for each state’s population. 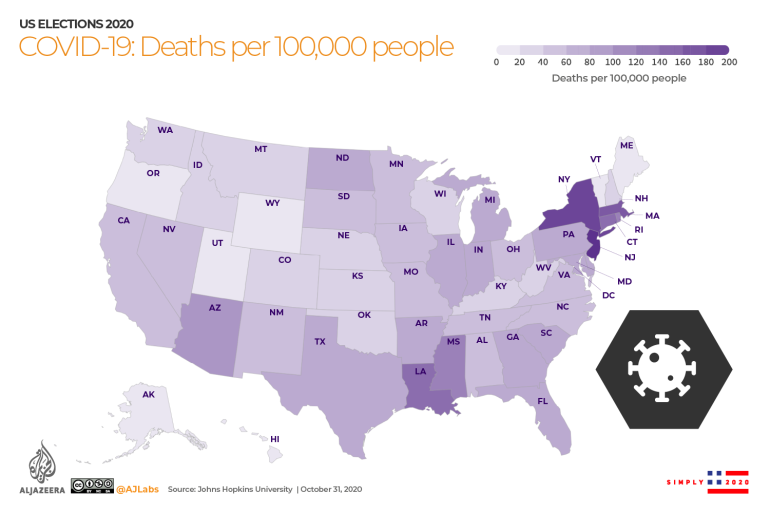