By Mersiha Gadzo and Ramy Allahoum

20:45 GMT – CPJ calls for journalists’ safety to be protected amid Nigeria protests

The Committee to Project Journalists (CPJ) has called on Nigerian authorities to allow journalists to continue to do their jobs while covering protests against police brutality in the West African country.

“Journalists in Nigeria must be permitted to freely report on demonstrations without threat of violence or intimidation,” said Angela Quintal, CPJ’s Africa program coordinator.

“Journalists in Nigeria are too often attacked simply for working to keep the Nigerian public and the world informed about what is happening in their country. Journalists’ safety is part of what it means to have freedom of the press, and is critical for Nigerian democracy.”

18:40 GMT – SARS: Why are tens of thousands of Nigerians protesting?

For two weeks Nigeria has been rocked by protests that erupted against police violence and evolved into broader anti-government demonstrations led by the country’s youth, leading to a deadly crackdown.

Young people mobilising through social media began staging demonstrations calling for the abolition of the federal Special Anti-Robbery Squad (SARS), which has long been accused of unlawful arrests, torture and extrajudicial killings.

The Economic Community of West African States (ECOWAS) has expressed concern about developments in Nigeria, urging both security forces and protesters to exercise restraint.

“While ECOWAS commission recognizes the right of citizens to freedom of expression and peaceful assembly and protest, it is also of the view that those rights should be exercised in a non-violent manner.”

“In this regard, ECOWAS commission calls on all protesters to remain peaceful in the conduct of their demonstrations. It also urges the Nigerian security operatives to exercise restrain in the handling of the protests and act professionally.”

This is a deeply disappointing response from ECOWAS, that reads as if it was drafted by the Buhari administration. ECOWAS blames peaceful, unarmed protestors for the bullets that Nigerian military are firing at them. #EndSARS pic.twitter.com/q9mwUXJeuV

British Foreign Secretary Dominic Raab said he was “deeply concerned” by recent clashes in Nigeria and reports of civilian deaths, and called for “an end to violence”.

“I am deeply concerned by the recent violence and continued clashes in Nigeria, and am alarmed by widespread reports of civilian deaths,” he said in a statement.

“We call for an end to violence. The Nigerian government must urgently investigate reports of brutality at the hands of the security forces and hold those responsible to account,” he added.

The Nigerian army and police killed at least 12 peaceful protesters in two locations of Lagos in a deadly crackdown on demonstrations, Amnesty International said.

“Evidence gathered from eyewitnesses, video footage and hospital reports confirm that between 6:45 pm (1745 GMT) and 9:00 pm (2000 GMT) on Tuesday 20 October, the Nigerian military opened fire on thousands of people who were peacefully calling for good governance and an end to police brutality,” the group said in a statement.

Ghanaian President Nana Akufo-Addo has called for calm in Nigeria amid the ongoing demonstrations, saying violence, whether by security forces or protesters, cannot be the solution to the West African nation’s ills.

I join all well-meaning persons in calling for calm, and the use of dialogue in resolving the #EndSARS impasse in Nigeria. I have spoken with President Buhari, who is committed to this end, and has begun the processes that will lead to reform. 1/2

Many high-profile musicians, actors and celebrities in Nigeria and abroad have backed the protests calling for the abolition of a notorious police unit known as SARS and the implementation of wider reforms.

Speaking to Al Jazeera from Lagos, entertainer and entrepreneur Sidney Esiri, also known by his artist name Dr SID, said the “situation in Nigeria had gone to the point, where you have to look at it and say, ‘if not now, then when?’

“We’ve had this particular situation come up for SARS for the last four years, it has been disbanded numerous times and resurfaced again,” he said.

They are still shooting at people this morning!!! #StopNigeriaGovernment https://t.co/hRC6Lyp1K6

“We the people, we are committed to peacefully protesting and exercising our rights as citizens to demonstrate for our cause but some arms of government, of different people, have found ways to disrupt this peaceful process and turn it into something violent so that they have the excuse to bring in the military, which is what they did yesterday.”

Nigerian President Muhammadu Buhari has appealed for calm in a statement, urging Nigerians to have patience while police reforms “gather pace”, without mentioning Tuesday’s shooting.

“The presidency appeals for understanding and calm across the nation, as the implementation of the reform gathers pace at federal and state levels,” presidential spokesman Femi Adesina said.

Human Rights Watch has called on authorities to withdraw soldiers from the streets and hold accountable those responsible for using forces against peaceful demonstrations.

“Nigerian authorities turned a peaceful protest against police brutality into a shooting spree, showing the ugly depths they are willing to go to suppress the voices of citizens,” Anietie Ewang, Nigeria researcher at Human Rights Watch, said in a statement.

“The authorities should immediately withdraw the military from the streets, and identify and prosecute officers responsible for or complicit in any excessive use of force against peaceful protesters.”

#Nigeria:After soldiers opened fire at a crowd of protesters in Lagos last night, the authorities should immediately withdraw the military from the streets & identify/prosecute officers responsible for or complicit in any excessive use of force against protesters. #EndSARS @hrw pic.twitter.com/R2UDQ4Ytyk

In a televised address, the Lagos governor said he has ordered an investigation into the actions of the military at Lekki plaza, suggesting the army may be responsible for the shooting.

“This is with a view to taking this up with a higher command of the military and to seek the intervention of Mr. President in his capacity as a commander in chief to unravel the sequence of events that happened yesterday night,” he said.

For clarity, it is imperative to explain that no governor controls the rules of engagement of the army. I have nevertheless instructed an investigation into the ordered and the adopted rules of engagement employed by the men of the Nigerian Army deployed to the Lekki Toll Gate.

United Nations Secretary-General Antonio Guterres has called for an end to what he called “brutality” by police in Nigeria.

In a statement, Guterres’s spokesman said the UN chief “urges the security forces to act at all times with maximum restraint while calling on protestors to demonstrate peacefully and to refrain from violence”.

The European Union’s foreign policy chief Josep Borrell has condemned the killing of protesters and has called for justice.

“It is alarming to learn that several people have been killed and injured during the ongoing protests against the Special Anti-Robbery Squad in Nigeria,” he said.

“It is crucial that those responsible of abuses be brought to justice and held accountable.”

A major Nigerian TV station linked to one of the ruling party’s top politicians has been set ablaze.

TVC managing director Andrew Hanlon told AFP news agency that “hoodlums” had attacked the station with petrol bombs and that its main building was an “inferno”. 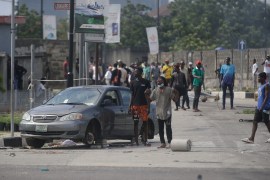 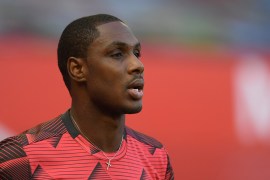