Melbourne, Australia – For many indigenous people in Australia, the country’s national day represents the brutal colonisation, including massacres, the removal of their children and dispossession of their land more than 200 years ago.

Likened to Columbus Day in the United States, the day commemorates the landing of the first Europeans on the continent, now known as Australia, in 1788.

But on Sunday, January 26, thousands of Aboriginal Australians and their allies rallied across the country to protest the annual Australia Day.

Since 2015, protests have been growing every year, supported by many non-Indigenous Australians.

Aboriginal activist Meriki Onus, who organises protests in Melbourne, said the day has “always been quite a painful day for Aboriginal people”.

“It represents the first day of invasion and subsequent dispossession of many [Indigenous] nations across the country.”

“We protest that day now. There’s no element of [Australia Day] that Aboriginal people can relate to.”

As an alternate name to Australia Day, the protest organisers now refer to the event as “Invasion Day”.

Onus said, “Calling it Invasion Day is the most frank and honest way you could really describe that day.”

Onus is one of the organisers of the Warriors of the Aboriginal Resistance (WAR), a loose activist collective that operates across the country.

One of the aims of WAR is to abolish Australia Day.

While the recent “Invasion Day” rallies may be a new phenomenon for most Australians, Onus explains that her forebears had been protesting the date as far back as 1938 – long before January 26 even became a national holiday.

At that time, Aboriginal activists referred to it as a “Day of Mourning”, and a similar protest, albeit much smaller, was held in Sydney.

Onus believed that it is her direct family history that inspires her, in particular, the long line of strong women in her family.

She said she learned about the long history of resistance of Aboriginal people from family members – a history she said “was never taught in schools”.

Aboriginal women at the forefront of protest

Onus is proud of the role of Aboriginal women in activism and resistance, both past and present, and explained that the organising of this year’s protest in Melbourne was done solely by Aboriginal women.

She said while there are challenges as a woman doing this work (“no one likes to listen to women”), Onus also said “there are strengths when we are in numbers, and all together, we are unbreakable”.

“We are fearless and unstoppable. I feel really confirmed when I’m with these people, and I feel this is a source of strength not a source of weakness.”

Onus said she is hopeful for the future, and with attitudes slowly changing, the protests will grow bigger every year.

“In Melbourne, I feel proud to be part of the change in social response to the 26th January,” she said. “We are strong and we can get there.”

Onus’s older sister Lidia Thorpe was also leading an Invasion Day event, a dawn service which commemorated the many killings of Aboriginal Australians.

Thorpe is not only a social activist. In 2017, she became the first Aboriginal woman elected to the Victorian state politics.

Thorpe agrees that her inspiration was also the line of strong matriarchs in the family.

Lidia said, when offered the position in the local Greens party to run for Parliament, it was a tough decision, as it compromised her activist ethics – stepping into the “coloniser’s realm”, as she describes the government.

“There is even a part of me that felt I was giving up my sovereign right joining the coloniser’s oppressive structure.”

Yet Lidia explained how she consulted her family and got their support, eventually campaigning for justice for the Stolen Generations and the formation of a treaty between the government and indigenous groups.

“There were times in Parliament that were really difficult,” Thorpe said. “But most of the time, I felt ‘well I’m here, I’m the only black voice in this place, so you’re going to hear me’, and I’ve got a few things to say because this establishment has oppressed my people for 200 years.”

Generally speaking, she said, her voice was well received, and she spoke positively about her time in Parliament.

Thorpe also said the experience demonstrated the effect of having Aboriginal people in Parliament, in a country which generally has very few Aboriginal representatives at either state or federal level.

“It really makes a difference, I believe, having Aboriginal people in Parliament.” 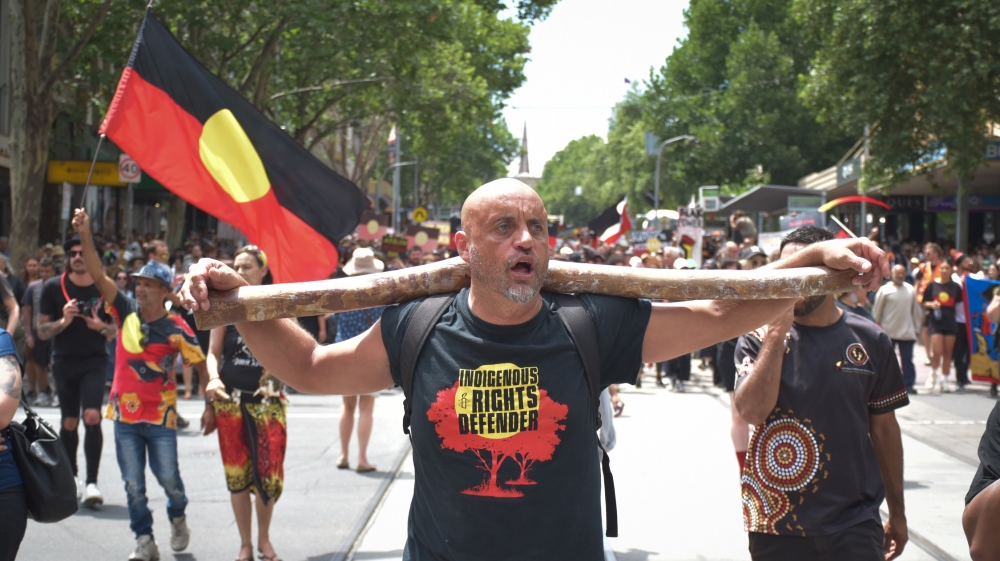 However, a year later, Thorpe did not win re-election and is now back to grassroots campaigning.

Being a leader is something Thorpe said is a continuation of family tradition.

“It’s not a choice that I’ve made, it’s something I have to do. It’s the responsibility I have as a sovereign woman, it’s a responsibility my mother had, my grandmother, and her mother.”

Thorpe said while she was proud to be the first Aboriginal woman in the state’s Parliament, “I’ll always be outspoken whether I’ll be inside government or outside.”

The dawn service she organised, Thorpe said, was in order to “bring back some of those old peoples’ wishes and the fights that they fought and died for”.

“We have to take on that responsibility, we can’t stop resisting, we have to continue the struggle we’ve been given. And try and make [Australia] a better place for our future generations.”