A third person was confirmed dead on Wednesday in devastating bushfires that engulfed Australia‘s southeast coast this week and a fourth was missing and feared dead, as navy ships rushed to provide supplies and assist with evacuations.

Twelve people have now lost their lives in fire-related deaths across Australia since the blazes broke out a few months ago, including three volunteer firefighters, after a three-year drought in large parts of the nation created tinder-dry conditions.

Fanned by soaring temperatures, columns of fire and smoke blackened entire towns on Monday and Tuesday, forcing thousands of residents and holidaymakers to seek shelter on beaches. Many stood in shallow water to escape the flames.

Bushfires have destroyed more than four million hectares (10 million acres) – an area larger than Japan – and new blazes are sparked almost daily by extremely hot and windy conditions and, most recently, dry lightning strikes created by the fires themselves.

Cooler conditions on Wednesday gave the country a moment to count the cost of the fires, although there were still more than 100 blazes in New South Wales (NSW) state alone and thousands of firefighters on the ground.

The body of a man was found in a burned car early on Wednesday on the south coast of New South Wales after emergency workers began reaching the most damaged areas, and police said the death toll would rise.

“Sadly, we can report today that police have confirmed a further three deaths as a result of the fires on the South Coast,” NSW Police Deputy Commissioner Gary Worboys told reporters in Sydney.

Large-scale livestock and animal casualties are also expected across Australia’s east coast, though Mogo Zoo – home to Australia’s largest collection of primates, along with zebras, white rhinos, lions, tigers and giraffes – was saved.

About 4,000 people in the town of Mallacoota in Victoria headed to the waterfront after the main road was cut off.

Mark Tregellas, a resident of Mallacoota who spent the night on a boat ramp, said only a late shift in the wind direction spared lives.

NSW Premier Gladys Berejiklian said authorities were working to restore communications with areas cut off by the fires, and she warned conditions will deteriorate again over the weekend. 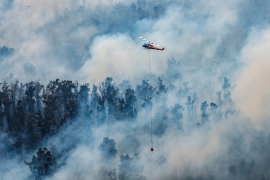 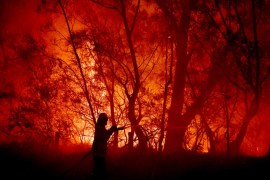 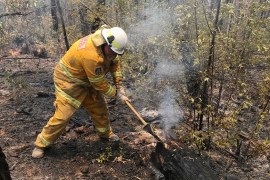