Luki added that the charges were based on testimony from at least six witnesses and experts, according to the Indonesian news website, Detik.

Koman has been accused of using social media to spread “hoaxes” to people in Indonesia and overseas after a police raid on indigenous Papuan students in Surabaya, the capital city of East Java province. Indonesians commonly refer to ”fake news” as “hoaxes”.

Indonesian police said, if necessary, they would contact Interpol about Koman, who is reportedly overseas.

Al Jazeera contacted Koman for comment, but she had not responded by the time of publication.

The unrest in Indonesia’s West Papua region is already in its third week.

In a statement on Wednesday, United Nations High Commissioner for Human Rights Michelle Bachelet said she was “disturbed” by the “escalating violence”.

“There should be no place for such violence in a democratic and diverse Indonesia,” Bachelet said in a statement.

“I welcome the appeals made by President [Joko] Widodo and other high-level figures against racism and discrimination,” she added.

Breaking: East Java Police police name "VK" as a suspect for incitement, spreading hoax and (the crime of) separatism re Papua protests. Request to Interpol to track her down. We understand it is @VeronicaKoman She's been widely used by media as source of videos from Papua pic.twitter.com/eu3Tzx6Nbp

On Tuesday, the Indonesian news site, Tempo, reported that at least 20 people had been arrested in West Papua for alleged rioting.

On Sunday, the Civil Society Coalition for Democracy in Indonesia told Al Jazeera that eight activists had been arrested, including Surya Anta of the Indonesian People’s Front for West Papua.

The unrest began in the second week of August when authorities arrested Papuan students studying on the island of Java for reportedly holding a pro-independence rally.

Another group of Papuan students was accused of damaging the Indonesian flag.

Dozens were then rounded up and racist slurs such as “monkeys” and “pigs” were allegedly hurled at them by local people.

The students were later released from detention, and government officials who were reportedly involved in the racist taunts were also questioned. By then, however, protests had started to spread in the West Papua region, which is divided into West Papua and Papua provinces.

The region of West Papua was a Dutch colony until the early 1960s when Indonesia took control, cementing its rule later in the decade with a controversial referendum.

The government in Jakarta maintains that West Papua region, which occupies the western half of the island of Papua New Guinea, is Indonesian because it was part of the Dutch East Indies, which forms the basis of the country’s modern-day borders.

West Papua is rich in natural resources and the site of the world’s largest gold mine and its second-largest copper mine, but it remains the poorest region in the archipelago.

According to Human Rights Watch, West Papuans have increasingly become targets of intimidation by “Islamist and nationalist groups” in Indonesia since the formation in 2014 of the United Liberation Movement for West Papua, which is advocating for Papuan independence. 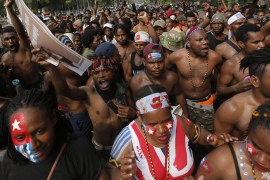 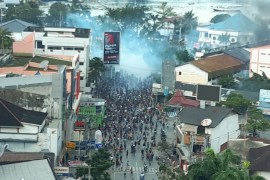 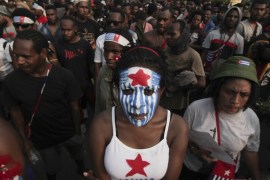