Ferry services to and from the flood-hit Thai island of Koh Chang have resumed, as water levels subside and local teams begin patching up damage caused to roads, homes and bridges.

Two days of heavy rains caused chaos on the popular tourist destination, located in the Gulf of Thailand, with flooding on Sunday, submerging low-lying roads and homes and forcing some residents to flee to shelters.

Rough seas and strong currents led to the suspension of ferry crossings.

Torrential rain brought by the southwest monsoon has caused severe flooding in more than 32 provinces in Thailand and killed 33 people since the end of August, according to authorities.

The worst floods are in Ubon Ratchathani province, in northeast Thailand. Thai officials said more than 20,000 people have been evacuated and some communities still have no access to electricity and clean water.

Scores of people in Mandsaur city found themselves homeless after the widespread flooding caused many houses to collapse.

Heavy downpours in India have affected almost every part of the country this year and killed more than 300 people.

Annual rainfall is essential in India as rains support two-thirds of the 1.25 billion population living in rural areas who rely on farming. However, the excessive rainfalls inevitably cause problems such as floods, landslides and water-borne diseases. 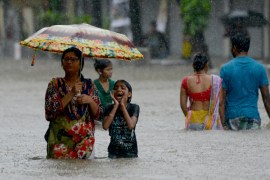 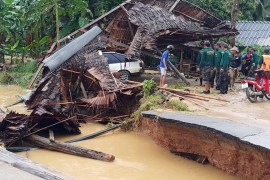