Dili, East Timor – It’s a Saturday morning in downtown Dili, the bustling port city and capital of one of the youngest nations in the world, East Timor.

In the central park, a broad catalogue of books is on display, including socialist texts, biographies on Marx and Lenin, key books on East Timor and novels.

Young East Timorese pore over the selection, part of a public community library available for loan.

This is the weekly Saturday morning outdoor library, a local project established by a group of young progressives who call themselves Movimentu Letras.

Established in 2017, Movimentu Letras aims not to increase not only the reading skills of the youth, but also their political and social literacy as well.

The name is an abbreviation of the local Tetun words “Lee ba Transformasaun Sosial”, meaning, “The Literacy Movement for Social Transformation”.

Not only do they hold the weekly park library, but also produce pamphlets and conduct workshops, and are even establishing an annual literacy festival.

Samu, 33, is one of the group’s coordinators.

He told Al Jazeera that Movimentu Letras “is a movement to promote literacy in our society [in particular] young people. We hope they can gain knowledge and become a critical young generation [in order to] analyse the situation in our country.”

In a country where the average age is 17.5 years, the education of young people is vital to the future of the nation, which is still emerging from the violence of Indonesian occupation.

August 30 marks the 20 years since the landmark referendum, which saw East Timor begin to gain independence from Indonesia, which had invaded the tiny half of the island in 1975.

Two decades later, its 1.3 million people have yet to accomplish the full dividends of their struggle.

The years to follow the 1999 vote saw a brutal occupation, with estimates of over 100,000 East Timorese dying from conflict-related deaths, starvation and disease.

Yet in 1999, after a 24-year resistance struggle and with international support, a referendum was held to decide whether to remain an autonomous province of Indonesia or become an independent nation.

An overwhelming 78.5 percent voted for independence.

Up to 2,000 pro-independence supporters are reported to have been killed.

Samu recalls that period of immense upheaval and violence. His family were living in Lospalos on the eastern end of the island.

“The militia burned down the houses and black smoke was everywhere. Gunfire everywhere night and day. The militia and the Indonesian military killed people who were suspected as an pro-independence, including my old brother.”

Cerca, 35, another member of Movimentu Letras from Lospalos, remembers the confusion vividly.

“We people called the situation at that time as ‘hal kavasala’, literally meaning ‘short-war’, because it lasted short and occurred at the last moment of Indonesian occupation. [At that time] there were only two choices; to become refugees or escape to the forest.”

After the turmoil, Samu and Cerca would be fortunate to experience independence which would finally arrive in 2002.

Another member of Movimentu Letras, Macy, 24, would grow up in the town of Bandung in Indonesia, where her family eventually settled after fleeing East Timor after the referendum results were announced.

Also originally from Lospalos, Macy says that her father was a policeman working for the Indonesians; as such, there was fear there could be reprisals.

“My father came from a poor family, so he [wanted] to be a little more successful. Finally, he decided to take the police test that was opened at that time [and] he became a police officer.“

Macy describes the night her family had to flee to a refugee camp in Kupang, capital of West Timor:

“My father picked us up with weapons full of bullets. There was a shoot-out at that time. My father and mother had quarrelled, it seems like my mother did not accept the decision that my father made [to move to Kupang].”

“I only remember I cried that night, holding a pillow while scared because of the gunfire everywhere. Father threw us into the truck without any more debate … the truck was dark with lots of people and the smell of vomit in it.”

After independence in 2002, a commission was held to document the history of the Indonesian occupation, revealing the brutality that had largely remained hidden from the outside world.

Yet while the truth may have been revealed, the question of justice still remains present, especially given that no Indonesian generals were tried for war crimes, only the Timorese militia.

Says Samu: “Well, for me I didn’t see the positive impact. We need reconciliation to forgive each other but in other hand we need practise of law. Who has dirty hands must be sentenced.”

However, for the younger generation, those old wounds are starting to heal, and they are finding their own ways of reconciliation, in particular through community groups such as Movimentu Letras.

In 2016 Macy returned to East Timor; given her father’s role during the occupation, this was a courageous move.

She says that as a “child of a pro-Indonesian, being accepted as a Timor in East Timor today, and still being able to make friends here and being accepted kindly is a big fortune for me.”

Yet despite the obvious benefits that independence has brought, the Movimentu Letras group say there is much more to be done, and cite illiteracy, unemployment and access to health and sanitation as the country’s biggest challenges.

With much of the population still dependant on subsistence farming, the Asian Development Bank estimates that 41.8 percent of the population lives below the national poverty line as of 2014, while UNICEF said the literacy rate in the country was only 58 percent.

East Timor’s economy is almost entirely reliant on oil and gas, on which the government is gambling billions of dollars in what many are calling a “pipe dream” based on resources that are forecast to run out in fewer than 10 years.

And with such a fragile future at stake, young East Timorese may well have a right to remain concerned, despite the 20th-anniversary celebrations of the referendum.

“The young generation must be more critical of their own government,” says Samu. “They must be aware if their government makes the wrong decisions that has a negative impact to the people and they can do something because young people are the new generation of the country.”

In the meantime, Movimentu Letras will continue with their Saturday morning public library in the park, striving for the social transformation encapsulated in the dreams of independence.

“To make a change we have to start from small things,” says Samu. “But this can have a big impact in the future.” 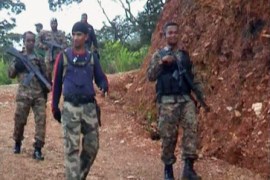 Will the death of a leading rebel and shooting of the president spur peace efforts? 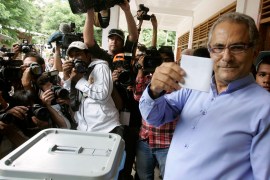 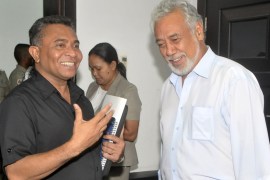 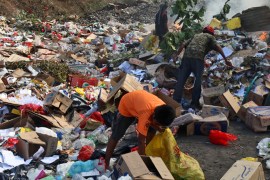 Scavengers as young as eight years old eke out a living in unimaginable conditions at the Tibar landfill near Dili.